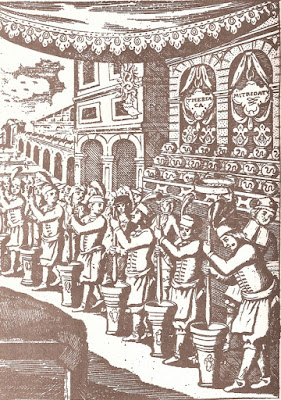 This post is about Venetian Treacle, the crème de la crème of all quack preparations. Like all such, Venetian Treacle was said to cure everything from ingrown toenail to plague. It probably cured nothing.

Known as ‘teriaca’ locally, its ingredients (69 including viper flesh) deserve a post of their own. This one’s about the ceremony of making the stuff.
Ceremony was very important. Teriaca was among Venice’s premier exports and extremely expensive. It had a cult status in every Venetian family's medicine cabinet too. So, in order to make sure that no one was quacking about it with the recipe, it had to be made in public with proper regulation, proper costumes, proper songs, proper bribes, proper nibbles and a great many feathers.
The ingredients were displayed in public, then mashed in public and finally boiled in public until the teriaca emerged as a dark stick liquid known as an electuary.

Only a few Venetian apothecaries were allowed the honour of making teriaca. They were called triacanti. Most of them had their premises around Rialto, where the foreign merchants flocked and usually stayed. Those who made teriaca would print handbills about it in many languages for their international customers. This one's from lo Struzzo, the Ostrich: 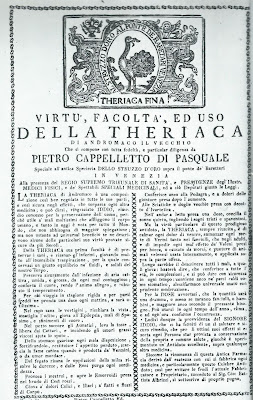 Earlier this year I had the honour of escorting members of London’s Worshipful Society of Apothecaries on medical tour of Venice. I took them to see most of the triacanti around Rialto –

La Testa d’Oro (the Golden Head), at the foot of the Rialto Bridge

Il Doge on the Riva degli Schiavoni (where he had to contend with competition from the ciarlatani, or quacks)

I Due Mori (the Two Moors) at San Salvador


For the London Apothecaries, I translated the following document that shows how much bribery and nibbles had to be provided by the apothecary (‘speziale’) who wanted to get his Teriaca properly supervised. 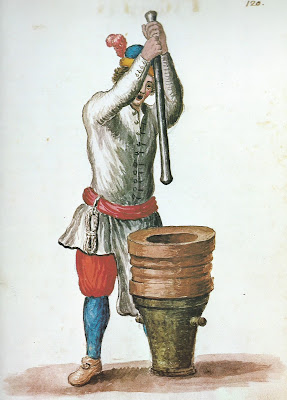 This is a supplication from the speziale at the Sign of the Doge on the Riva degli Schiavoni - an invitation sent to the chancellor of the of the Magistrato alla Sanità (the health department) on 4th September, 1787.

You will note he is writing in September – but his ceremony would not take place until May because that was when most of the ingredients, especially the viper flesh, were said to be in the best condition; also because the movement of the stars in that month specially favoured remedies. Weather was probably a factor too. You didn’t want rain or snow falling on your teriaca parade, either, because all the various substances had to be displayed in public for three days to assure everybody of the genuineness and quality. Then the ceremony itself took place outdoors, so that everyone could observe and enjoy the lusty singing of the facchini mixing and breaking up the ingredients to the rhythm of a song.

So … here are the inducements offered by the speziale in the hope of being allowed to make a bit of teriaca:

For the tips that will be given out in great quantity,
I’ll limit myself to indicating that for the weighing part of the ceremony,
to the leader, the second in command and the facchini (the lowliest and busiest workers in the apothecary business), I will give a beret of black silk.
That of the leader will have three feathers, two red and one black;
the second in command, two feathers, one red and one black;
the ordinary facchini will have one red feather each.
The facchini who grind the mortars will get a beret of yellow wool
with a pink tassel and a red feather.

Before starting the weighing, the chancellor will be given a silver tray
and a bunch of beautiful flowers costing at least 10 lire,
and the others who are supervising will receive a bouquet worth at least 3 lire.

Once the drugs are weighed, they will be displayed, carried around
first in front of the noblemen, who will stand centrally,
then to the doctors and noble ministers, who will stand on the right of the chancellor,
and then to the speziale, who will be on the left.

Once the cinnamon has been weighed, we will offer some of the best,
wrapped up in paper, to all these officers, who will number ten.
When just over half of the drugs have been weighed,
we will hand out lemon water, hot chocolate, pastries and coffee.

The magistrates will at this point leave, with the weight registered,
and the second councillor of the spezierie,
the one who was supervising the weight of the drugs,
will then be given his flowers and his cinnamon.

When the facchini begin to break up the ingredients,
they get a snack too, which will consist of
a slice of salami, a slice of cheese, some bread and a glass of wine.
After this food, they will begin their work and
they’ll be given two more drink breaks.
That’s how it is on the first day.

On the following days, everyone will be given a bottle of rosolio and
a half-bottle of acquavita.
In the course of the morning, they will twice be given a glass of wine
and after lunch another glass of wine and so on until their work is finished.

On the day of mixing, the weighing won’t be done
unless three officers are present to examine it.
When it is half finished,
they get some lemonade, hot chocolate, pastry and some coffee.
And after the weighing, more coffee.

Payments to the facchini: all the facchini get 7.1 lire per day.
Only in the first half-day
in which they are weighing the ingredients
they get an extra 4 lire.

To the prior and the two councillors of the medici
will be given four loaves of sugar and Teriaca
and to the officers of the speziali, six loaves of sugar, Teriaca, 22 lire in cash, nutmeg oil, goma storace calamita and castoreo.

The proprietor of the Teriaca pays as a tax to the Collegio dei Medici of 5 ducats for every 1000 parts of the drug.

After two months, the officers from the Collegio degli Speziali are requested to come as well as the officers of the Sanità, to open the big terracotta urn.

Once it’s opened the usual tests are carried out, and as recompense, those who attend get 8 lire. Two bottles of Teriaca are sealed and delivered to the prior of the speziale, who has to deliver them to the Magistrato della Sanità.

In 1441 it was ordered that any fake teriaca and mithridatum (a cheaper, simpler version) would be burned in the middle of the Rialto Bridge

In theriaca’s countries of origin (the middle east), makers of bad teriaca would be beaten by physicians … but in Venice the faker would be ordered to pay 1 ducat for every pound of his fake product. The fine would be divided between the denouncer, the magistrato and the collegio.

The trade in teriaca, and especially all the pomp and solemnity that went into the public making of it, really became important from about 1500. Teriaca production continued until the mid-nineteeth century ... in the early 1900s the only pharmacy still making it was the Testa d’Oro, but they were doing so only within the walls of their laboratory, not in the street, because from 1842, all the solemn ceremonies and the supervision of the state were abandoned.

Without the ceremony, the drug simply lost its allure.
Teriaca was effectively replaced by a liquor known as Fernet Branca.

What a wealth of wonderful detail here, Michelle. You must have given your own touring Apothecaries a unique experience of Venice.

Those Apothecaries were lucky to have you!

It must have been quite a cash cow to make it worth handing out all those goodies AND paying tax on it! Thanks, Michelle, this is a fascinating bit of history about which I knew nothing till now.