Once upon a time, O Best Beloved, there was no email. People sent one another postcards. The photograph below shows a caryatid at Copped Hall. One of the first cards sent to me by Linda Newbery, who's been a friend since the mid-1980s, carried a similar image.  This is my photograph but the one Linda sent had been taken by her mother, Iris Newbery, a wonderful photographer and one of the volunteers who, over the last 17 years,  has been responsible for the resurrection of Copped Hall from the ruin it was until quite recently.  Iris  often takes the photographs for the Friends of Copped Hall's calendar and Linda has sent me each one as it appeared. 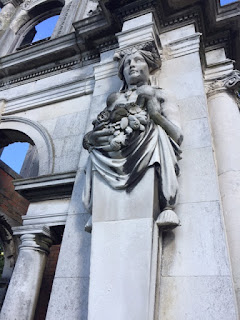 The caryatids greet you as you go into the gardens. Opposite them are their male equivalents, the Telemons, see below. On October 9th, Linda took me and Jon Appleton and  Christian Keys       to Apple Day at the house, and for me it was like fiction coming to life, a sort of dream come true. 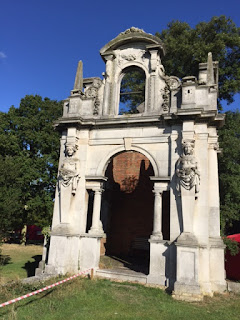 Linda's novel, THE SHELL HOUSE, (pub 2002)  features Copped Hall, though in a state far removed from its present condition. Linda changed things, as novelists often do and has added a grotto and a lake to the landscape,  but this was the place that inspired her.  I  love the book and I've wanted to visit Copped Hall for a long time. 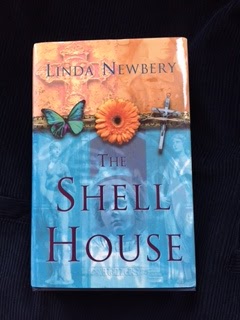 Below is the view that greets you when you come up the  long drive. Copped Hall has been a place of habitation for several centuries.   From 1150, there have been families here, farming the land, building, and right up until the fire of 1917, it has been a home.  The Cranfields, the `Conyers and most recently the Wythes added to the original structure, made gardens, erected statues and created a house that could be seen from the surrounding countryside. Copped Hall overlooks three valleys and is a perfect example of a dwelling in a landscape - something that appeals deeply to the British. 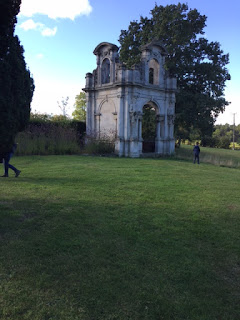 Below is the present day façade of the house. After the fire in May, 1917, the Wythes did not restore the mansion. In 1952, the estate was sold and things from the mansion (staircases,  leadwork, gates, railings etc) were dispersed to dealers and others. One of the most touching things about the resurrection of Copped Hall is the effort being made to retrieve these items from the places they went to and a great many of them have been returned and put back where they used to be. After 1952, the gardens went to rack and ruin and there were also problems with vandalism. 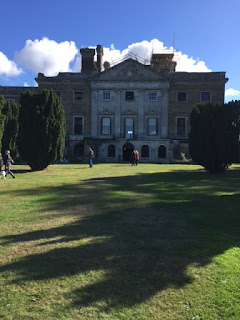 It was clear to us, walking round the gardens, that archaeological work is still being done. Here is a photo of the excavation which hopes to uncover some of the Elizabethan remains discovered  on the estate. 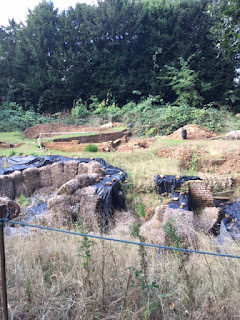 In  1988 a group led by architect Alan Cox  got together to fight a proposal to put up offices on the land in the 1990s.  They won and the scheme was rejected.  They became the Friends of Copped Hall with the aim of buying the property and restoring it to its former glory. They gained support both locally and nationally for their principles.

Below is a picture of the Walled Garden, a place of supreme order and beauty. In the last fifteen years, it has changed from the tangled, messy jungle the original volunteers found when they took it over.  Iris Newbery has been a volunteer for many years and remembers these days very well. She is now nearly 91, but still volunteering. On the day we visited, she was in the office, in a gallery above the shop,  fretting over a printer which wasn't behaving properly. The laminator was also, she felt, on the brink of causing trouble.  She and others have each had a task that they've undertaken enthusiastically day after day, week after week, in all weathers. They have made an orderly paradise out of what was once a ruin and seeing it on a beautiful October day you realise how much work was involved. 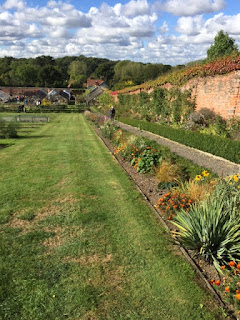 Here is one of the glasshouses. They were nothing but metal skeletons when the volunteers arrived to start the work. 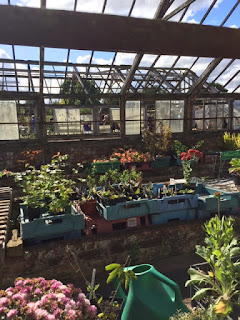 And below is a heap of collected  bits of the decorative border to one of the paths which will be put back together again one day. Nothing that's rescued is thrown away. Everything that is found or bought from other owners is used imaginatively and intelligently. 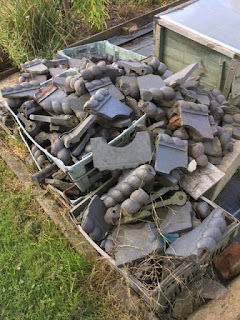 And here is the gate of the Walled Garden. 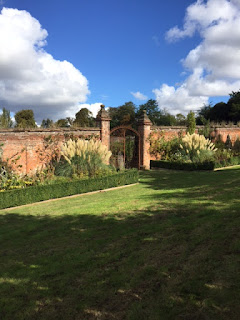 While the garden was being restored, work on the house was also continuing. The rooms of the mansion are still not exactly as they were. You can see bare walls, and roof beams and exposed areas which will one day be covered, but the soul of each room is there already. Here's the kitchen. 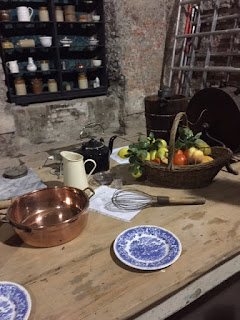 Here is what will one day be a most beautiful staircase. The Friends of Copped Hall are seeking money to restore it, bit by bit. Every little helps, as they say, and on Apple Day they displayed a number which people could text to donate even small sums and earmark them for this staircase. That's what I'm going to do with my donation because my photograph doesn't fully convey how wonderful it looks. 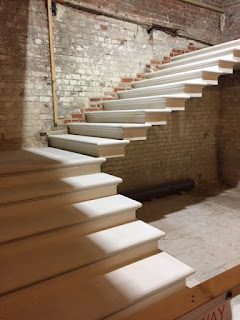 Here in one of the bedrooms is a dress displayed in a creative way which enables you to imagine previous owners, standing at the window. I'm a sucker for dressmakers' dummies and this is a particularly lovely outfit in front of a very nice view. 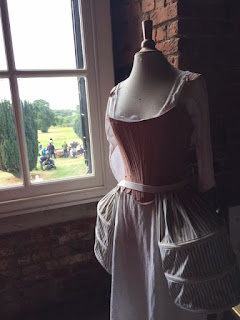 And this is a model of the house which is also a money box. You can put your notes and coins into a hole in the roof! 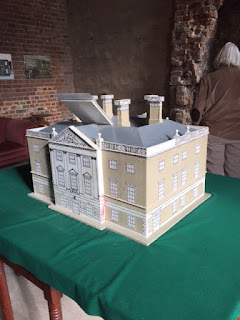 And here is another part of the garden. 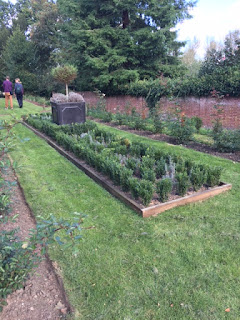 Finally, what made Copped Hall extra enchanted for me was this discovery: it was where A Midsummer Night's Dream was performed for the very first time. You would have to go far to find a more perfect venue for such an occasion. 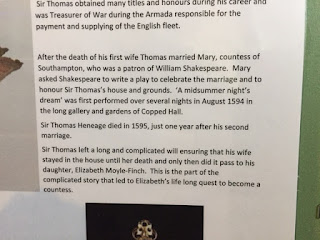 The Hall hosts a great many cultural and educational events, though it's not open very often. It's best to look on the website if you want to visit, but I can promise you will love it. The volunteering continues into the catering too. I saw, (though I didn't eat) ranks of delicious - looking home- made cakes but I can vouch for a terrific veg and nut roast and salad.  50 p bought me Margaret Gervis's recipes for Mincemeat Cake and Tea Loaf on both sides of one piece of A5, beautifully laminated by Iris Newbery's laminator when it was in tip top condition...

Midsummer Night's Dream was performed in the Long Gallery and Gardens? How amazing and modern is that! I wonder if the audience had to follow the players around, or if the day of one performance was just very very wet.

I can't tell you, Adele, how much my heart filled with joy on reading your post on this chilly autumn morning. You see, when my husband and I were a newly married couple in 1976, our first home was in Woodford Green, which called itself an Essex village but was to all intents and purposes, London. We would often walk from our front door and were very soon in Epping Forest which was a great place to escape the bustle of the city, explore (and get lost.) One day we came across the ruins of Copped Hall which was a burned-out shell all but swallowed by the encroaching trees. We gazed into the ruins of the house where mighty forest trees were thrusting their arms through the walls and collapsing roofs. We stood in saddened wonder at its decline whilst at the same time our own personal love-story was blossoming.

We soon moved up to North Yorkshire which we made our home and brought up our children. London very soon was a distant memory. I had assumed that Copped Hall would be totally buried in the forest and forgotten. I am so thrilled that it has risen Phoenix-like from the ashes, thanks to the hard work and dedication of volunteers. I salute them and thank you, Adele, so much for this post. It means a great deal to me. Magical indeed.

Two Sallys! Sally Prue, I hope you will go there one day - you'd love it. Maybe next year?

Sally Zigmond, it's lovely to read this. I remember Copped Hall when it was neglected and roofless, too - part of the old conservatory was at that time used to keep pigs, and the garden was a jungle. In my book, THE SHELL HOUSE (mentioned by Adele) I go back to the house (or at least my fictional version) in that kind of state, in the early days of the volunteer project. The volunteers there have done a wonderful job - and it makes the place very special, that it's looked after by volunteer enthusiasts. I do hope you'll have the chance to visit, even though it's a long way from North Yorkshire!

Thank you for comments! And wonderful that Sally Z had seen it in its overgrown state...do visit this place, it's really lovely.

Events of the last few days have prevented me from commenting here earlier. This sort of place makes you realise that things will still be here long after the 'Tumult and the shouting dies/The captains and the Kings depart."