Wall to Wall by Julie Summers

I have just spent a magical, exhausting but immensely rewarding week as a tutor on an Arvon Foundation non-fiction course. As I write I am sitting up in bed in what used to be John Osborne's study at the Hurst, his home for the last years of his life. It is one of the most beautiful places I have ever spent time in though I have scarcely been beyond the front door. The study is large and sparsely furnished. The only true reminder of his presence is his leather topped writing desk at which I have sat every morning and evening reading work submitted by the students. While I am no believer in ghosts or spirits, it certainly feels slightly unreal and mystical to be inhabiting the same space as the great man. I suspect that much else in the room has changed since his day and I am sure there was no green Exit sign with a running man and an arrow on the wall... But I digress. 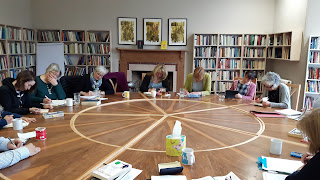 The Arvon Foundation was set up by two poets, John Moat and John Fairfax, and Antoinette Moat who helped buy the first Arvon property, Totleigh Barton in Devon. The original aim was to provide time and space away from school for young people to write poetry. Today residential courses take place in one of three houses situated in remote rural locations in Devon, Shropshire and Yorkshire. Over the last almost fifty years it has helped countless writers to spend time honing or developing new skills or simply learning to come to terms with how they wish to express themselves, whether through poetry, prose, drama or non-fiction. The recipe is simple: take up to sixteen people of mixed age, background, ability, ambition and sex. Shut them up in a remote house - in this case in the heart of Shropshire - with two tutors and plenty of food and see what happens. The structure of the course is up to the tutors but fits into a framework that has been well tried and tested: the mornings spent in a workshop and the afternoons writing or attending half hour tutorials with one or other of the tutors. It doesn't sound like hard work when written down but it is intense, let me tell you, especially from the tutor's point of view. 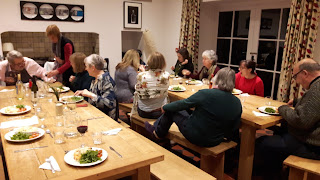 All meals are enjoyed together and the evening meal is prepared by the students, with washing up and table laying done in teams. Inevitably the table talk focuses on writing so in the event the only time you are not either thinking, talking about working on writing is when you are asleep. At least that was the case for me. Yet it was hugely enjoyable and something I would do again if I were asked. While it would be out of order to name names, we have been lucky enough this week to work with a dozen fabulous writers who each has a major project they want to bring to a wider audience. Stirring tales from family history were predominant and I have enjoyed learning about the author, Charles Lee, who wrote down the Cornish language; a trio of women connected with the Garden City movement and bawdy women in history to name but three. 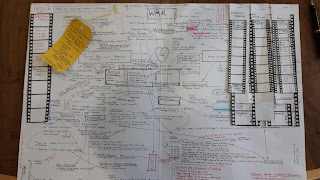 There is something energising about being with a group of people who are wholly focused on writing historical non-fiction. It reminds me of the immense richness and variety of possibilities there are to focus on an aspect of real life and bring it out in written form. I admire writers of fiction for their ability to conjure up worlds in their heads but I am equally in awe of writers who can corral and tidy up the messiness of life and show it to us in ways that make some sense, drawing strings together to weave a story that does more than just lay down facts, dates and names. In one of our workshops we looked at the old chestnut: oral history. To write historical non-fiction is to some extent to be an eyewitness to history. Yet as anyone knows, to claim to have the only view on an historical event is to ignore the human mind's ability to process what it sees, hears, feels, smells and senses. I remember chairing a panel one this topic a few years ago at a literary festival and concluding that one person's view can differ so radically from another's that it is as if they had witnessed two different events. 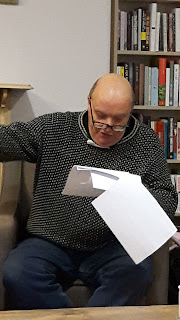 We tried this out in a controlled experiment at Arvon this week. The results were nothing short of hilarious. On the evening prior to the exercise, so just over twelve hours earlier, four members of the group, including my fellow tutor, Ian Marchant, had performed a reading-with-actions of a fourhanded play written by Charles Lee and first performed in 1913. The resulting accounts from both players and audience were so diverse as to make me wonder whether we had all been in the same room together. The only thing that convinced me that we had was the overwhelming sense of place and atmosphere. That is something that often links people's experiences and - if they are unfortunate to suffer a bad or dangerous one - can form lifelong and exclusive closeness. I suspect in the case of our experience any allusion to the Revered Becksmith will just raise a broad grin of recognition. I knew the experience of teaching on an Arvon course would be a good one but I had no idea beforehand just how rewarding it would be. I cannot remember enjoying the company of a dozen or so fellow writers as much as I have this week and I return to my desk and the second half of my book - now known thanks to my 'colleague' (as he always addressed me) Ian Watt as the Shitty First Draft. If you ever fancy an indulgent sojourn with fellow writers, I cannot recommend an Arvon course highly enough, either as a tutor or a student. The staff at the centres are wonderful, supportive and unflappable and make the whole experience easy to enjoy. But it is the writers who make it special and memorable. It has reminded me of the joys and pitfalls of writing historical non-fiction and how the joys win every time.
Posted by Unknown at 00:30

It was that and more besides, thank you Sue. I loved it and would do it again at the drop of a hat

"Ian Watt"? (What??!!)
"Magical, exhausting, immensely rewarding" you say Julie - that pretty much sums up my experience of the week. I also barely stepped beyond the front door all week, and was never once tempted to nip back home (I live nearby), so immersed was I in the experience. I mocked when people warned me that 'they'll expect you to do a 12hour day' - but that's how much time I willingly gave it, & I almost didn't want the week to end. It was a week of huge leaps in my own confidence as a writer (this'll be my first solo book - I've only co-authored before), nurtured by a wonderful group of fellow participants and tutors in a nourishing setting. A bit like being a grandparent, "I knew it would be good, but I didn't know it would be this good". Thank you Julie, thank you Ian, thank you Arvon - and of course, thank you to my fellow participants.

You beat me to it, Ann!! Ian Watt was a friend of my grandfather. I changed it to Marchant as soon as he spotted it. Typical to make that sort of error when writing at 5am. We loved having you there Ann. It was a really magical week.

I've been both a tutor and a punter at Arvon and enjoyed it every time. I met fascinating people, made permanent friends, and always returned home stimulated to write more, and better (and exhausted!)
Sometimes the Society of Authors have special weeks for their members: I had a great bus-man's holiday doing 'Non-fiction writers writing fiction.' I still haven't finished that novel, but I know, roughly, how to do so now.