Last month I visited Glengormley, a northern suburb of Belfast, and walked in a park named after you. I was fascinated by the big model of an early plane, and even more fascinated when I found out about your wonderful life and accomplishments. I thought readers of The History Girls would like to know more about you.

I’m imagining you first as eleven-year-old Lilian, a wee girl growing up nine miles north of Belfast. You love watching the birds on Carnmoney Hill and imagining what makes them fly. You love ponies and freedom and adventure. You’ve got Big Dreams. Your name may be Bland, but your personality certainly isn’t.

There’s still a decade left of the nineteenth century and you can have no idea of the changes you’ll see in your life. It’s lucky that you’re going to live until you’re 92, as you’ve got so much to pack in. You’ll live in several countries and have more careers than most people could dream of.

Actually some of your careers don’t even exist yet. I mean, you’re going to be an aviator – that’s not actually a thing in 1889, but it will be by the time you attend the first British aviation meeting in 1909 and decide that you want to build your own plane. After all, if Louis Blériot can do it, why shouldn’t you? OK, you’re a woman and you’ve been told women don’t do that kind of thing, but that’s never put you off anything.

Less than a year later, in September 1910, you’ve done it! You’re the first woman in the whole world to design, build and fly your own aeroplane, and it all happens here in Ireland – in Carnmoney, County Antrim. While a few miles away, down in the Belfast docks, a huge team of men start to build the world’s biggest and most luxurious ship, the Titanic, you’re hard at work at your own little biplane glider. Your Mayfly is a lot smaller than the Titanic, and built mostly of bamboo, ash and elm, but its maiden voyage is more successful. 30 yards is a very respectable distance for a maiden flight in 1910.

I love the fact that you call it Mayfly. It’s a pretty name, but that’s not why you choose it: you say the plane ‘may fly, may not fly!’ That makes me think you’ve got a sense of humour, as well being really smart and hardworking. (But I also imagine you clenching your fist in determination that it will fly.) 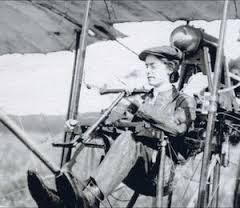 Nothing deters you. You have to wait for ages for the fuel tank for Mayfly’s engine to be delivered, so in the meantime you improvise with a whiskey bottle and your aunt’s ear-trumpet. Because you’re not the kind of woman to wait around forever, and you want to be up there, in the sky with the birds, not earthbound.

Even without your amazing aviation achievements, you’re an all-round star. You keep your love of horses, and insist on riding astride like a man, rather than side-saddle. By the 1920s, most women ride astride but you’re a pioneer in this, as in so much else. I love thinking of you striding over Carnmoney Hill, camera in hand – you’re a great photographer – wearing breeches, covered in engine oil, smoking and never afraid to get your hands dirty. Because you’re more than a dreamer: you’re a doer.

And I don’t quite know how you manage this, but you fit in a career as a journalist too. You’re a sports reporter and photographer for London newspapers, and – back to the ponies here – you’re especially brilliant at capturing the galloping and jumping of horses. It’s all about speed and movement, isn’t it? It always has been, since you used to watch the birds on Carnmoney Hill. 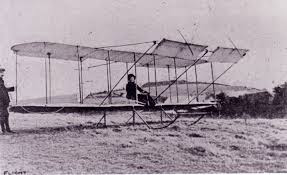 Flying is still your main passion, though. You go on to set up in business selling your own biplanes and gliders. Your dad gets a bit worried about all this flying – it’s a dangerous activity – and he promises to buy you a new Model T Ford if you give it up. You think that’s a pretty good deal, teach yourself to drive the car, and soon you become Ford’s first agent in Northern Ireland.

Maybe driving’s a bit tame for you, though, after all that flying, and you’re soon off on a new adventure – to Vancouver this time. It’s a long journey by sea – I wonder if you watched the seabirds following the ship, and remembered the birds flying on Carnmoney Hill, and your own little Mayfly soaring through the sky?

But Canada’s an adventure too – you help your husband establish a farm, and I bet you’re as successful a farmer as you were aviator, horsewoman, driver, photographer, journalist and businesswoman. You don’t stay in Canada forever, though; you make a final journey back across the Atlantic and settle in Cornwall.

Wherever you are – Carnmoney, Canada, Cornwall – you live the fullest life you can. Girls in the 21st century can look to you for inspiration, as you once looked to the birds.

What a great story!

Now that is an intrepid and admirable woman! Thanks for sharing Lilian Bland's story, Sheena.

What an amazing woman!