Like many writers, I often go for a walk if I'm stuck, if I need to think my way through a knotty plot problem, map out the next part of the story, or simply to get away from my desk. I live in a small town and five or ten minutes in any direction will take me out into the countryside. One of my favourite walks is to Guys Cliffe, an impressive gothic ruin on a sandstone bluff above the river Avon, about a mile upstream from the town of Warwick.

Guy's Cliffe is named for Guy of Warwick, the legendary English hero, who fell in love with the  high born and beautiful Felice. To win her hand, he had to prove his valour by battling it out with dragons, a giant boar and the fiercesome Dun Cow which had been ravaging the land hereabouts. He wins the lady's hand but later goes on a pilgrimage to atone for his life as a man of violence. On his return, he became a hermit and retreated from the world to live in a cave above the Avon.


The Oratory reputedly founded by him became the chapel of St Mary Magdalene which is still on the site. After the dissolution of the monasteries, the chapel, outbuildings and surrounding land were acquired by a Sir Andrew Flammock who built a Tudor house, completed in 1556.


In the 18th Century, the property was acquired by Samuel Greatheed who built himself a mansion. He was MP for Coventry and an extremely wealthy man, having inherited a large plantation on St Kitts in the West Indies and the slaves that went with it. The house was started in 1751, after his marriage to Lady Mary Bertie and built in the grand palladian style. 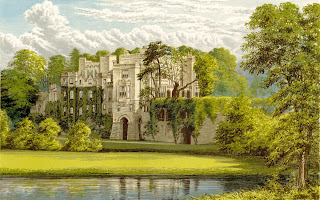 The house passed by marriage from the Greatheed - Berties to the Percy family in 1826. They occupied the house for over a century, their graves can be found in the nearby village of Old Milverton's Cemetery, but the last Percy to inherit in 1933 never took up permanent residency. The house  was used as a hospital during the Second World War and as a school for evacuees. In 1947, the estate was broken up and sold. The families who had owned it from the 18th Century were gone, although their names live on as streets in Leamington Spa: Greatheed Road, Percy Terrace, Bertie Terrace and Bertie Road in nearby Kenilworth. Plans to convert the house into a hotel came to nothing and it fell into disrepair. The Free Masons acquired the undercroft and part of the house as a Masonic Lodge in the 1970s. They still use this part of the building but in 1992, during the filming of The Adventures of Sherlock Holmes - The Last Vampyre, the building caught fire, leaving the suitably gothic ruin that we see today.

Now, Guy's Cliffe is often used for ghost hunts and ghost tours because, of course, there are ghost stories. Oppressive atmospheres, giant black figures, white ladies and even bad boy, Piers Gaveston, but perhaps he belongs to nearby Blacklow Hill and a different History Girls post.

But what happened to poor old Felice, when Guy decided to change his ways?

Yes please. Sounds like a forgotten Ariadne on Naxos situation?