THE HANDMAIDEN: Elizabeth Fremantle explores the problems of adaptation 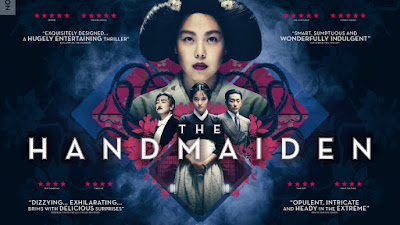 When a favourite book is adapted there is inevitably a sense of disappointment on finding the screen version doesn't live up to that conjured in the mind of the reader. But as The Handmaiden had transposed Waters' narrative from nineteenth century England to 1930s Japanese occupied Korea, I was prepared for a radically different retelling and that is what was delivered.

Visually glorious and languidly paced, the film utterly seduced me as the young and impoverished Soo-kee, magnificently played by newcomer Kim Tae-ri, was sent to the remote estate of an aristocratic book collector, as maid to his niece Hideko. However, faithful to the original material, Soo-kee has been planted there by a con man on a mission to persuade the wealthy Hideko to marry him, with the ultimate intention of having her committed to an asylum.

Without revealing too much and spoiling it, I can say that this is a film of two distinct halves. At a certain point the perspective shifts from Sookee to Hideko, exposing things Sookee is not aware of. Problematically the film suffers at this point on, from the loss of the captivating Kim Tae-ri as protagonist and much of the seductive tension is lost when it descends to relentless girl-on-girl prurience. 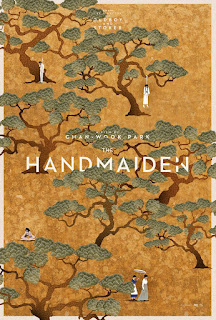 I'm not averse to a little tasteful lesbian erotica in a film but this was of the sort that was so explicit as to make me want to gouge my eyes out with embarrassment. As for the scenes of hard core torture and finger-chopping, suffice to say I couldn't look at all. It's not that these scenes didn't have a place in Park's film, they made sense within the narrative as he set it up, and there was the triumphant pay-off for the two manipulated women. But something left me uneasy about the adaptation as a whole.

My reading of Fingersmith was (as well as being a beautifully written, cunningly plotted page-turner) as a feminist critique of the male gaze and the infantilisation of women.  Park's film, however, seemed to undermine Waters' central themes. Whilst masquerading as a celebration of female wiles by allowing the women to spectacularly out-fox the men and putting them at the centre of the story, it also undermined the gender politics of the original by offering a lurid lesbian fantasy for the male viewer.

For me an adaptation must be faithful to the spirit of the source material and in this The Handmaiden failed.  As for those panting critics, strangely all male – I suspect they were thinking with something other than their heads.

Elizabeth Fremantle's latest novel The Girl in the Glass Tower is published by Penguin. Elizabethfremantle.com
Posted by Liz Fremantle at 06:00