In praise of Henry Justice Ford by Adèle Geras

This below is the cover of my most precious book. It's TALES OF TROY by Andrew Lang, whom older readers may remember as the author of the coloured Fairy Books. It's a school text book, one of the Longman's Class Books of English Literature. It was published in 1915 which means that when Miss Cooke gave it to me in Ibadan, Nigeria in 1951 it was already an old book, possibly one of Miss Cooke's own childhood favourites. 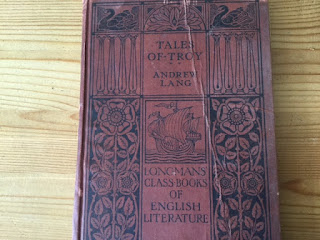 It's important to me because it answers, at least for three of my own novels, the question all writers are asked: Where do you get your ideas from?  This book, and reading it and learning a great many pages of it by heart by the time I was eight years old, coloured my view of Ancient Greece and made sure that those stories, and especially the tale of Troy and the war fought over Helen, permeated my childhood and have been favourites of mine ever since. 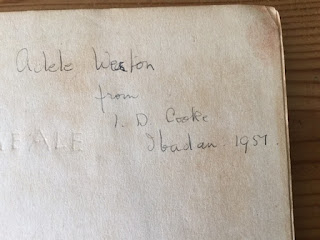 But the subject of this post is Henry  Justice Ford. If you go to Wikipedia, there's a page for him but you have to hunt about a bit.  He was born in 1860  and died in 1941. He married Emily Amelia Hoff, who was thirty-five years younger than he was.  There were several famous cricketers in his family. He illustrated Andrew Lang's Coloured Fairy books and you can see some of those pictures in Wikipedia Commons under the link I've put at the end of this post. 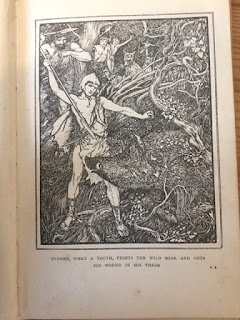 The pictures I've photographed all come from Tales of Troy. These images are so firmly branded on my imagination that I see all my own  characters in my mind as though they've been depicted by H. J. Ford. The features, the clothes, the landscapes...everything about these drawings seem to me a perfect representation of the things they're describing. For instance, Helen, below, will always look just like this to me. 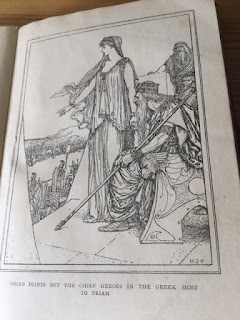 The rather ornate, decorative, style which is marked by the influence of the Pre Raphaelites and also of the Arts and Crafts movement and William Morris, is one I find very beautiful. I think these illustrations have enough in them of menace and darkness to avoid the charge of being too pretty. The women in them are very lovely. Oenone has a breast almost showing (that's the picture with  Paris stretched out on the ground at her feet) even though this is a school text book. 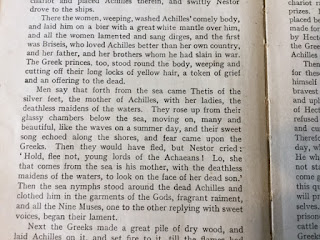 The text, of which I reproduce a sample (above) is as florid as you might expect. I thought this was completely wonderful when I was seven and I still love it, though I recognise the over the top elements of it as well. 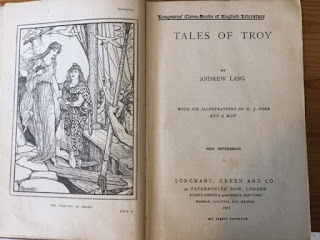 Look at the clothes. I'm sure it's these images which have formed my taste for draped, flowing fabrics; maybe for fabrics in general. H.J. Ford is very interested in what people are wearing and I am, too. The men have splendid helmets and breastplates and the women have dresses that might as well be made of water for all the cover they give their wearers. There's a strong element of the erotic in these depictions of the Ancient World and I am surprised that Messrs Longman and co weren't aware of it. You may be sure that the pre - Great War young men and women who studied from this book will have pored over it with renewed enthusiasm for the Classics. Those thighs! Those arms! That uncovered breast....and the hair. Everywhere there is hair falling over shoulders and curling on skin. 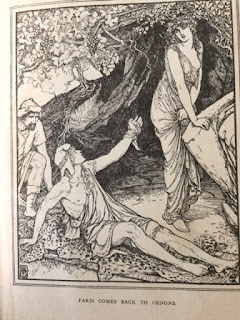 I feel that H. J. Ford has not had the notice he should have had.  I think it's time there was a revival of interest in his art. I live in hope that someone, somewhere (Tristram Hunt, at the V&A, are you a follower of the History Girls?) might mount some kind of exhibition of his work. I, for one, would love to see him hailed as a giant of illustration. 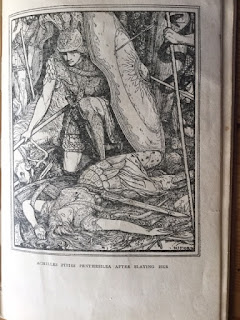 https://commons.wikimedia.org/wiki/Category:Henry_Justice_Ford
Posted by adele at 01:30

Yes! And in praise of teachers and re-tellers of tales, too.
What I remember is how starved of art of any kind I was, and so how very precious was every single illustrated book.

I adore these older stories, I out read my class at school and got given some of the older school books that were no longer main stream, and found that older Victorian books often had more cruel punishments and some fairly gruesome ends for the bad guys. The older books didn't pull their punches, folk died, starved, and beaten, Not sure my teachers even knew just how much I got from the older 'boring' books they gave me to keep me entertained! The images in the older books also were more traditional and more what I would find in an art gallery than a class room :-).