THE BRITISH LIBRARY AT BOSTON SPA by Penny Dolan


Research, as an idea, brings images of ancient bookshelves and peaceful reading. In my mind are places like the circular British Museum Library Reading Room (now an exhibition space) or studious retreats in settings like Gladstone’s Library at Hawarden in Flintshire. I may now have to change my mind . . .

The “new” British Library at St Pancras, London, displays a magnificent wall of leather-bound volumes, exhibits pages of historic books and manuscripts and hosts various themed exhibitions, as well as offering a busy café full of international students and visitors. 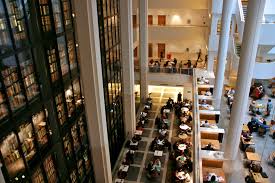 Meanwhile, away in Yorkshire, there is the less famous version: the British Library at Boston Spa, near Wetherby. In 1961, the science and technical information storage was moved here. In 1971, the library became a “lending” division for industries and companies and, by 1988, Boston Spa was dealing with eight million photocopies a year, and the work and quantity has carried on growing.

The site became briefly newsworthy when, in 2013, the British Library closed the newspaper depository in Colindale, (Hendon), sending the contents to their new National Newspaper Storage Building in the north. Five hundred and thirty-five articulated lorries were used to move the collection to the huge and almost windowless block where the archive could be kept in highly controlled conditions away from the damp of the ageing Colindale stores.

That “five hundred and thirty five lorries” or, more probably, “lorry-loads” is information I heard during a tour of the British Library, Boston Spa, an event specially organised by my local library’s Friends group.

So I can now, through this post, report that this vast modern library is unlike those historical fantasy libraries of my imagination. 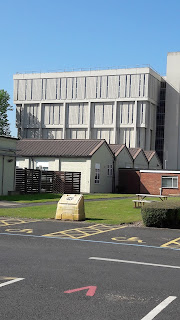 Beforehand, I had wondered about the choice of location. Although Boston Spa is a distance from London, its location beside the A1 makes it a good transport link and, before the Beeching cuts, there was even a railway line.  The site is quite close to York with its colleges and university but - possibly more important than academic needs - was the history of the place. The site is an old WWII aircraft munitions store where, originally, low-level buildings were spaced out between protective earth embankments, designed to limit the impact of explosions and contain any fire. Boston Spa’s own history suggests conservation purposes.

Moreover, as the land was, and probably still remains, government property, offering the site to the British Library for their important archive must have come as a relatively cheap and welcome solution for one Government ministry or another.

As befits such a start, security on the British Library site is still tight: our names and car numbers had to be sent in beforehand, and checked again at the entrance gates and in Library reception.

Books are there, at Boston Spa, but they are barely noticeable within the whole machine of the library.  Our first look was inside the Digital Preservation Scheme, where the team at Boston Spa team have gathered a collection of computers spanning from the 1970’s through to the modern models, bringing sighs of nostalgia to the IT users in our group.

The computers are not there as historic exhibits: their purpose is to make sure that digital evidence (e-books, sound files, internet content, digital objects and so on) will be accessible for viewing fifty, a hundred or more years ahead.  We all know – now – that floppy discs and hard discs degrade; we also know – especially after last weekend’s NHS computer crisis - that “old” programmes eventually cease being updated or supported.

When, back in the 1970s and 80’s, digital content began to be released, nobody thought about the future:  books and magazines came to the Library for storage, but the diskettes or CDs within the back cover were largely ignored. Now the Digital Preservation team try to preserve the material, to keep the integrity of the information, and to make sure the legacy of the content remains unchanged.  Wanting “old” information to remain viable, they transfer material into formats that can be viewed and/or played on computers both now and into the future.

However, the British Library team do not do this alone. Teams of knowledgeable enthusiasts – such as the wonderfully named Software Preservation Society -  help with the work. They share solutions on the internet , collaborate and update their knowledge at annual conferences, write emulator software to “hold” old programmes, and do all that is needed to keep the history of the digital revolution alive for the future.

Then – wow! – the second stop on our visit looked like the future itself. We had entered the non-descript side door of a building, climbed a few flights of stairs, stepped through a heavy fire door onto an internal viewing platform.

We looked down and saw occasional crates of books on rolling tracks, arriving or leaving at a computer work station. The person sitting there was dealing with the request, but the process was not guided by any Dewy catalogue or similar scheme but by the ten-digit “shelf-mark” numbering on the crates. As each crate came or went, it was weighed and height-checked automatically and the item removed for borrowing was weighed and measured too. The computer, not the human, was tallying and registering the book or journal withdrawn or replaced; moreover, the whole system was kept in order not by a set shelf location but by the location of the crate number. The system was based, so I heard, based on a shoe warehouse somewhere in Europe.

Then, with a small personal push, the crate slid back into the roller-ways and sped off through a hole in the wall. We too, we went through a heavy fire-door on to the other half of the viewing platform and – wow!  -  we were in the book store. Tall, narrow metal cranes shot towards us and away, sliding at speed between the high stacks, collecting used book crates and zooming them off to a shelf far away within the vast, twenty-storey warehouse.

The great gloomy place, the odd flashing lights on the whizzing cranes, the speed of the automatic book-crate selection and the few lone humans needed to support the borrowing made the bookstore seem like a scene from a science fiction movie.

Moreover, we were warned we could not stay watching for long as the book stack is a low-oxygen environment. The atmosphere protects the books and reduces the risk of any fire spreading but it is not so preservative of people. If workmen have to go into the stacks to sort out any physical task, they must enter in pairs and come out again - for a true “breather” - within twenty minutes.

I must say there was no hint here of cosy, cushioned, book corners or the pleasures of idle browsing, but there was certainly a ghostly quality to the vast cathedral-like space.

Our next stop was the “mailing” building where requests arrive, apparently as paper dockets. The British Library is linked an international system for sharing academic theses, known as ETHOS, which now receives about a hundred requests a day for material as well as requests coming in from other sources. All documents are scanned as jpegs, to keep the integrity of the source, before being printed, given a covering sheet and being sent on to the person waiting at the St Pancras site or elsewhere, all within about 48 hours. There were various types and sizes of scanners here, ranging from standard computer scanners up to an A0 size scanner screen.

Even in our group of eight, there was not enough time to ask everything - and with so few staff about in some areas, I did not want to get left too far behind.

However, as is the way with such visits, other sights and facts stuck in my mind:
- the newspaper cages stacked with editions of the current year’s papers, waiting to go into the archive store;
- the narrow wooden box that held a  collection of glass photographic slides, and which were used for the WW1 exhibition at the Imperial War Museum – and the fact that b&w photos are best scanned in grey-scale, not black and white if you want to retain detail;
- the dinner-table-top sized scanner seen copying pages from a vast book: descending, the glass protective sheet pressed on the open pages firmly enough to hurt if you didn’t get your hands out of the way;
- the suggestion that white gloves were not used to protect  newsprint but to protect the workers hands – and we never did get to see inside the newspaper storage facility;
- the shelves that were so full of identically-bound books on remote scientific topics that my head started to hurt;
- the changes in temperature and atmosphere as we moved from one place to another.
- the pleasant staff café with its very non-London atmosphere, menu and style
and finally
-  the large, modern reading room, which we were could not enter in case we disturbed readers.

However, as I peered in through the nearest glass window, I did see a single row of the graceful metal-framed reading desks which had been retrieved from the one of the British Library’s Reading Rooms.

A bespectacled gentleman was sitting there, earnestly studying a copy of an old Bradford Telegraph and Argus. So “History” was of interest in the British Library Boston Spa after all, even though it had seemed the unlikeliest setting at times that morning.

And, in places, I did catch that special scent of books and ageing newsprint.

I visited in 1979/80 when I was at library school in Sheffield. The technology has obviously changed but not the warehouse setup. I remember being impressed by the mechanisation of supply which then (I think) included overhead conveyor belts for books.

The conveyor belts for books were there, Anabel, but we saw no crates books moving within the mailing floors. We saw plenty of empty desks and idle scanning equipment as well.

I would have liked to ask whether books are still being shipped out or if all the most needed information moves about online now - but it seemed rude to ask the people taking us round for their first tour-leaders role about it.

The empty feeling could well be a mix of funding cuts within academic libraries, or the result of having no librarians to guide or extend students studies, or modular study systems with a limited information "reach". Or all and more.

what a fascinating account. Thank you! When working at the BL, I had always wondered what went on up there at Boston Spa. You have demystified it, but retained the mystery too.

It sounds quite a scary place!

I just love your blog, thanks for sharing such a nice article about Beauty .