Land and its stories by Gillian Polack

When I was a child, my mother (a science teacher) tested her excursions during the school holidays. We didn’t just go to Ballarat (an old gold town in Victoria), then, we visited the town and the museum and then walked through an old mine. We went to Vaughn Springs and panned for gold and gems. I normally sum this up as going to the beach to study the ecology of rockpools, but today I’m not interested in rockpools.

What I saw when I was a child was what mining did to landscapes. It created tunnels and hills and dredged streams deeper or reshaped them. In one of my childhood landscapes, the streams had been destroyed entirely in the search for gold. I looked at small hills and, as a child brought up on English books, I loved them. Then Mum explained those hills and I found out that, in the making of a tiny hilled landscape, everything had been destroyed. The water from local streams had been targeted to help force the gold out under pressure. Those small hills everywhere were the refuse from the urgent search for gold. There was so much destruction in the old goldfields that it wasn’t until later that I learned how to interpret landscapes. Mining can leave land permanently changed.

Interpretation is important. And one never stops learning. Earlier this year, I read Bruce Pascoe’s Dark Emu, Black Seeds: Agriculture or Accident? This book questioned the way we interpret the Australian landscape historically. I realised that I’d factored mining into my interpretation of agriculture, but hadn’t considered the wider ramifications of farming before the early 1800s in exactly the same place. The mining had obliterated a lot of the evidence of farming, but Pascoe found more evidence in explorer’s journals and records from early European settlement.

This was in my mind when I went to Amiens this July. I only returned last week, so it’s very fresh.

I was investigating a heap of things for a heap of reasons, but when I began my research a few months ago, I realised that the debris of World War I lies on Somme landscape the way the debris of goldmining lies on the Victorian goldfields. I needed to understand three periods in that region (the Middle Ages, the seventeenth century, and the end of World War II) but before I could interpret them, I had to understand World War I.

My big advantage in the interpretation is that it’s a centennial year: everyone was willing to talk with me and the museums were stuffed with information. There were pictures of before and after, for example, for bombed sites and for major battlefields. I could take all this out and catch a train and visit a once-destroyed town and check out the fields and wander the streets of Amiens and interpret… everything.

I thought you might like to see some of the things I saw. This is not a complete guide. Not even close to one, in fact. This is one small element and even that element is something I’ll be processing what I saw until I’ve finished the novels I’m working on. Maybe longer. It will take far more than a blogpost to explain that landscape.

My focus today, then, is on the effect of World War I on the area of the Somme around Amiens. I went up to two trainstops away in more than one direction to see what I could see.

The first thing that struck me was the missing places. There are some complete landscape changes in the region. Some of it is the usual (villages deserted because the people moved elsewhere) but in the Somme region, there is a very disturbing type of desertion. The satellite map shows places where trains and roads still do not go. This is the worst remaining parts of the Zone Rouge. The Zone Rouge was much larger a hundred years ago, but the web tells me it will take 700 years before every part of the battlefront region from World War I is liveable again.

The Red Zone is that part of the front line that was so destroyed by battle that it needed to be mended before it could be lived in. I visited part of it that had been mended and looked at maps of those parts that I can’t get to.

This is a street in a torn named Albert, which was rebuilt almost from scratch.

“You can’t live here, it’s dangerous” was the official word. 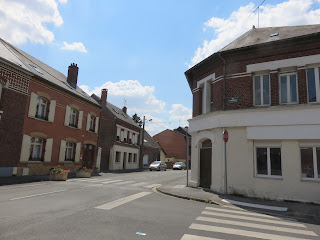 I visited because that rebuild was so important to me for so many reasons. It reminded me that houses are not the only thing in a hometown. Places of beauty and places of awe make a difference, too. Albert has all of these. It was mostly built in the 1920s, but it remembers the earlier past through its landmarks. 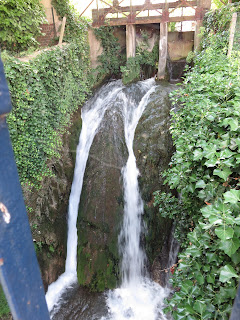 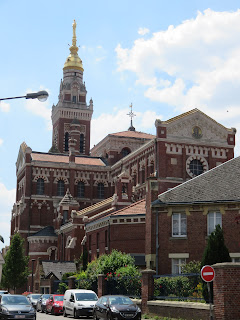 Each place in a ruined landscape makes different decisions or has decisions made for them. I talked to a potter in Amiens, and he told me about his family. Their town was never rebuilt. There’s a museum there, he said, but there are no trains or buses. Also no residents. His family moved to Amiens because there was nothing left for them.

Not everything is destroyed on or near a military front line ,even one as destructive as that in World War I. Amiens was partly destroyed, Bits of it are old. Bits of it are new. Bits of it are rebuilt in older styles, in an attempt to not lose its past. Amiens has an important history and a lot of rebuilders commemorated that history by having houses that have an earlier ‘feel’ or that take  stones and carvings from the rubble and make them part of a home. I have hundreds of pictures of Amiens, because its way of balancing survival and rebuilding and moving forward is very much its own. This means that the city’s character emerges in all the sectors of the town, whether they’re the once-a-citadel or whether they’re tourist sections or whether they’re remnants of the nationally important seventeenth century place. 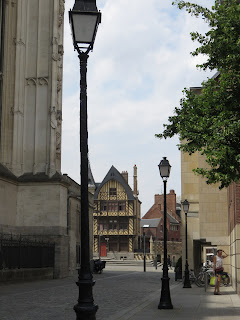 Amiens added to this complex streetscape as part of its commemoration of World War I. It has photographs of the war telling stories using the streetscape. Those pictures show us who fought; they show us the damage: they remind us that scars do not heal easily. 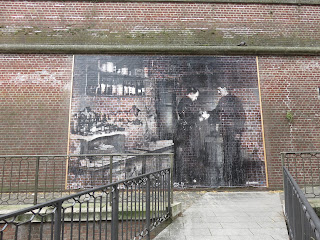 It’s easier to think that war is past if one lives on the other side of the world. It’s harder if one sees a new house where the family home once rested. It’s much harder still if one looks at a plantation of pines that once held the town one’s family had lived in for generations.

Something that tangles the Somme landscape is the sorrowful tourism for families of soldiers.  People from outside the region want to see the destroyed landscape. Only some of them have interest in the region itself. Right now, there are Aussies everywhere, retracing the tracks of their fallen relatives. It’s become a replacement industry for the region, making up for everything that was lost in World War I and then World War II.

This is not new. The extent of the tourism is something that’s only a hundred years old, but the memory of war in what used to be Picardy is not new at all. This landscape is scarred because of where it is and how rich the soil is. Some of the best farmland. Old cultures, cool people. And so it has suffered in war after war after war. The stuff, in fact, of stories. Some of the great French battle epics are set in this part of France. English-speakers think of the English/French interface. Readers of Dumas think of La Rochelle. Everyone thinks of Paris. But this area has a special history and the landscape is much harder to read because of this history.

What looks like fields and forest may also be layers of buried sorrow.
Posted by Gillian at 08:17

I knew a lot of people died there, but 700 years before it’s livable again - horrible! The Land of Mordor in our own world...

Thanks for sharing something that I don't really think about. This is a different kind of 'after' than what usually comes to mind. I often think about the people, but not the land itself. I can't imagine how difficult it is, to come back after something so cataclysmic. To rebuild; respecting the past and trying to build for the future.
As for all the photos, I would love to see more.