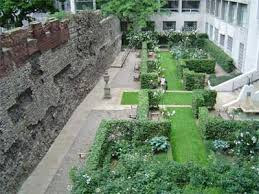 A visit to the London Museum always makes me feel much closer to the past. From some of the windows you can see London Wall, Roman walls with medieval additions. The vast excavations for Cross Rail are a great nuisance but they have uncovered unfamiliar corners of the City to be discovered as you walk to the museum, such as Salters’ Garden, the lovely sunken garden in the photo above. It’s laid out with areas of lawn, hedging, pergolas and fountains and the original Roman City wall forms its southern boundary. It belongs to the Worshipful Company of Salters - no, I didn’t know they existed, either, but they’ve been there for six hundred years.

I was fascinated by London Nights, the exhibition of photographs that is currently at the London Museum. Most of the images are in black and white and made me think of Van Gogh, who considered night “more richly coloured than the day”. 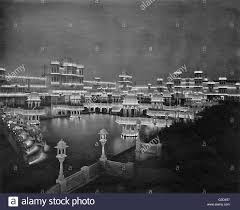 This exhibition is split into three sections and the first, London Illuminated, is the most impersonal, showing buildings lit up at night. Most of them are familiar but I was intrigued by the one above, showing a brilliantly lit fairy palace on a lake, with the caption White City. I only knew the White City as a rather grim area with a greyhound racing track and TV centre but it had an earlier incarnation: in 1908 forty acres of shining white buildings and waterways were built there for the Franco-British exhibition.

This photograph shows a bird’s eye view of the site of the Exhibition, which was bigger than the Great Exhibition of 1851 although it is far less well known. With what we would now consider dubious taste, the most popular attractions were the two so-called "colonial villages" - an "Irish village" and a "Senegalese village", which were supposed to communicate the success of the British Empire (just before it started to disintegrate).

This astonishingly confident event attracted 8 million visitors. The White City Stadium was then hastily built to be used as one of the venues for the 1908 Olympics, which were held in London after Rome dropped out at the last minute due to an eruption of Vesuvius. Another photo shows the long forgotten 1910 Congress Hall, a magnificent illuminated pagoda built for the Japan British Exhibition.

The second section of the exhibition, Dark Matters, explores the more sinister and mysterious aspects of the night. I particularly liked a short film about a dog called Ella wandering alone on Essex Road at night. She encounters weird animals in the window of a shop called Get Stuffed, runs away from a dog catcher and meets a homeless man who offers to share his bottle with her. 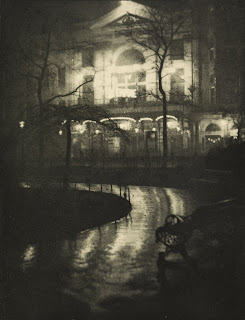 This photograph of a gaslit Leicester Square is also hugely evocative. The rather sad area we know now was then the glamorous centre of London’s night life, with oyster rooms and theatres. Here is the Empire, before it became a cinema, and here also were the Alhambra, the Hippodrome and Daly’s. Edwardian sleaze was more stylish than ours and soldiers remembered the pleasures it once offered when they sang, Farewell Leicester Square. 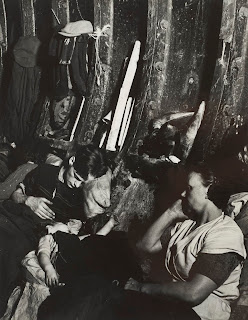 
This is one of Bill Brandt’s wonderful photos of Londoners sheltering from the Blitz in the underground which, I think, are as memorable as Henry Moore’s shelter drawings. Brandt was born in Hamburg in 1904, moved to Paris to work with Man Ray and came to England in 1930. He brilliantly documented English social life during the Depression and then recorded the effects of the war in London. He worked for both the Ministry of Information and the National Building Record. Many of his intensely atmospheric photographs were taken at night, without flash, during the city’s blackouts.

There are also several photographs by Bert Hardy, another outstanding photographer of the period. He was a Londoner who worked his way up from a lab assistant to become a world famous photographer. His warm and compassionate photographs were published in Picture Post, which in its heyday sold nearly two million copies a week.

The final section of the exhibition, Switch On Switch Off, shows a complex web of associations: work and play and people who work at night, including cleaners and sex workers. 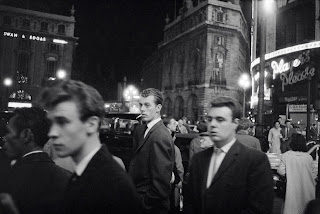 This photo of young men clubbing in Piccadilly in 1960 seems very remote. Their faces look both callow and sinister, as if they are just as likely to be carrying knives as their grandsons. Suits and ties for a night out have disappeared and so has Swan and Edgar.

In this last section I enjoyed listening to the rich dark songs of Schubert’s Winterreise on headphones while watching a short film called A Winter Journey. Filmed from the top of a bus at night, it takes us through corners of London that have already become history a few years later, like the Occupy camp in Finsbury Square. This exhibition left me with an exhilarating sense of being in a city that constantly reinvents itself and survives.

This is fascinating, Miranda. How long is the exhibition on for?

Until November 11th. I do hope you enjoy it as much as I did.