Remembering The Battle of Bosworth by Catherine Hokin 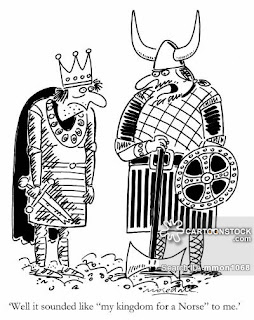 With thanks to 1066 and All That by Sellar and Yeatman

As Sellar and Yeatman put it in 1066 and All That - probably still my favourite historical book of all time which may explain a lot - History is not what you thought. It is what you can remember. One of the things many people are pretty certain they can remember is the Wars of the Roses, which ended (or didn't but we'll get to that) 533 years ago today on the 22nd August 1485 with the Battle of Bosworth. History buffs or not, ask a sample of your friends about this time period and I guarantee they'll all have some sense of it. Whether it's the lost princes in the Tower, the ill-fittingly romantic name, Richard and his hunch-back, or his car-park discovery, the Wars of the Roses and its characters still resonate. They also inspire great passion. My father was a member of the Ricardian Society and a war-gamer whose sand-table battles (ask your parents) re-enacted every twist of that August day. As I said many times when my novel about Margaret of Anjou came out, he was so obsessed with the conflict that, as a child, I was fairly certain that it was still going on. And who can forget the Channel 4 documentary after the discovery of Richard III's body and Philippa Langley's face when she looked at that re-created head.

Perhaps one of the reasons the Battle of Bosworth still attracts such attention (apart from the fact that a king died) is that it still courts controversy. We have no eye-witness accounts - all our knowledge of the day's events is derived from documents written after the fact and under a regime with a need to remember history in its own particular way if it was going to have any kind of a future. Some sources in fact come even later - for example there was no real attempt to analyse the use, type and position of troops  for nearly another 200 years. The site itself has long been a matter of dispute - the stone marking the spot of Richard's death is at Ambion Hill, near Sutton Cheney in Leicestershire. In 2010, after a major archaeological project, the actual site of the battle was announced as being 3km away from the memorial. Part of the evidence which relocated the battle site were 22 pieces of lead shot, ranging from gunshot to grapefruit-sized canonballs. Not only did this discovery change the location, it also dispelled a myth that the armies fought each other with bows and arrows rather than firepower.

Controversies over the site are one thing but the issue of treachery - and that of Lord Stanley in particular - is quite another blood-boiler. Listen to my father and William Stanley made Attila the Hun sound like Winnie the Pooh. The version he subscribes to has the hitherto loyal Stanley turning his coat at the last minute, swooping his troops down the hill behind Richard in a shock move that ensured the king was butchered. That Stanley declared for Henry at the last minute is as certain as anything in this battle can be but the idea of the attack having no deeper roots than a self-serving decision on the day as been re-examined by historians such as David Hipshon. He cites Stanley's failure to support Richard not as a sudden change in loyalty but as coming out of a 20 year power-struggle in Lancashire; a personal score being settled in a bigger political arena. And I can already hear the cry - "tomaytoes/tomatoes: it's still treachery!"

The site, the type of weapons used, who turned coat and who didn't: it all disappears into the mist when we get to what happened to Richard himself. Oh the ire it used to raise. The stories of his removal from the battlefield are told in a number of the chronicles which later reported the battle. According to Vergil, the body was ‘nakyd of all clothing, and layd uppon an horse bake with the armes and legges hanginge downe on both sides’, a scene the Crowland Chronicle described as a ‘miserable spectacle in good sooth’. His body was then taken back to Leicester, his head supposedly hitting the stones of Bow Bridge as it was carried across. Most accounts agree that the body was put on public display for two days at Greyfriars church. Some then have the corpse interred in a plain unmarked tomb inside the church, others talk about an alabaster tomb, with an effigy of Richard on top, being erected at a later date on the orders of Henry VII. If that ever existed it was lost, as was the King with the most commonly believed story having him tipped unceremoniously into the River Soar.

Except, of course, he wasn't. In 2012, an archaeological excavation discovered a battle-damaged skeleton in a Leicester City Council car park, believed to be the site once occupied by Greyfriars Priory Church. The body showed that the skeleton had 10 wounds, eight of them to the head, inflicted in battle and suggesting the soldier had lost his helmet. A blade had hacked away part of the rear of the skull. In 2013 DNA testing identified ‘beyond reasonable doubt’ the remains as those of Richard. The University of Leicester identified the skeleton as a result of radiocarbon dating, comparison with contemporary reports of his appearance, and comparison of his mitochondrial DNA with that of two matrilineal descendants of Richard’s eldest sister, Anne of York. So we had Richard but we didn't have an end to the arguing with both York and Leicester campaigning to host his remains - a battle Leicester's tourism department won.

Was 1485 the end of the Wars of the Roses? Not for Henry VII who lived under the shadow of pretenders and resurrected dead princes throughout his reign and probably never sat that comfortably on his throne. And, beyond a categorisation date of the here ends/here starts type, not for historians who still have so much of the battle left to pick over. And don't forget there's another controversy to come: the lost princes, one of history's ultimate cold cases. There's bones, they've never been tested and Philippa Langley is on the case...

Email ThisBlogThis!Share to TwitterShare to FacebookShare to Pinterest
Labels: 1066 And All That, 1485, Anniversaries, Battle of Bosworth, Catherine Hokin, Henry VII, Plantagenets, Princes in the Tower, Ricardian Society, Richard III, Wars of the Roses

Ooh, more power to Phillipa Langley. I'd love to know if those bones really were the princes. Not that it would prove Richard murdered them, of course...

I thoroughly enjoyed your post. Had not seen the photo of Richard before. He looks so handsome. And I had to laugh at the sign about no burying of dead monarchs.
I also am very interested to know about the young princes. I am really surprised that no one has tried to test the bones as yet.

I think - and someone please correct me if I'm wrong - that the Queen has to give permission and she hasn't. If that' true I'd quite like to see a face-off between her and Ms Langley!