Ann Swinfen
I would like to pay tribute to Ann Swinfen, who died on the 4th August.
Ann was a good friend to me and to many. She was a wonderful, much-loved writer of historical fiction, including the Oxford Medieval Mysteries and the Christoval Alvarez series. Her many readers will be sad that there can be no more stories about Nicholas Elyot or Christoval. But Ann also wrote fascinating, informative blog posts, here on The History Girls, as well as on her own blog, and she was very generous in the advice and support she gave to fledgling writers. I will miss dreadfully knowing that I could always ask for Ann's help, and receive a wise and practical response.
The 20th of the month used to be Ann’s day on The History Girls blog, until the time came when she felt she had to concentrate on her books, and she put my name forward to take her place.
So this post is dedicated to Ann.

Thank you, Carolyn, for this tribute to Ann. Today is the day of her funeral and the History Girls would like to send sympathy to her husband David and their children and grandchildren.  Mary Hoffman

For today’s post, I thought I would again write about something different from my usual histories of the Meon Valley. We spend some time every year – and have done for the past thirty or so years – in south-east France, in the department of Drôme, which, if you don’t know it, runs from roughly south of Grenoble to roughly north of Avignon. The magnificent river Rhône flows the department’s entire length, with abundant vineyards in the valleys and on the hill sides, growing alongside cereals and fruit, olives and lavender, and the dramatic Vercors mountains rise to the east. It is a wonderful region, yet it is not well known and so is, for the most part, quite tourist-free.
To the west of the Rhône lies the department of Ardèche, another magnificent region with some wonderfully remote communities and many ancient villages. One such is Chalencon, a mediaeval stone village, perched on the Vernoux plateau, overlooking the valley of the Eyrieux.
Chalencon is a village of narrow and winding cobbled streets, old houses and shops, and towers. There are cars but it’s very possible to take a photo excluding much (if not all) of modern life, giving you a good sense of how it might have felt hundreds of years ago, though it was undoubtedly not quite so clean and picturesque back then! 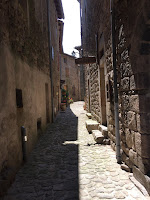 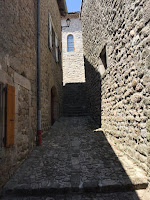 The village apparently has Celtic origins, with the Celts building some sort of community on the promontory here sometime between the 9th and 4th centuries BC. Later, the Romans built an oppidum (a fortified town) on this site. Chalencon became a barony in the 10th century AD, and its most famous baroness was Diane of Poitiers, the mistress of Henry II.

So why am I telling you about Chalencon? It is not just because it is ancient and beautiful, even though it is. It is because it has the most remarkable mesures à grains, a public amenity for measuring grain, which played an important part in the development of trade and commerce by standardising grain measurement and deterring fraud. Chalencon’s mesures probably date from the 15th century, but are wonderfully well preserved.

In order to write this post, I thought I’d have a look online for other examples of such public measuring devices, expecting to find innumerable images to share. But, in truth, I have not found very many. I daresay many physical examples can be found throughout France and elsewhere, but perhaps no-one has thought to photograph them, or to post their photos online!

However, I will share something of what I have learned…

In ancient Greece there existed measuring tables called σηκωματα or sekomata. I have found references to a few such sekomata, but one found on Naxos in the 19th century will serve as an example. The date of this table is not given in the literature I have read, but it is referred to as “Hellenistic”, putting it somewhere between 323 and 31 BC.
The stone table has six basins of different sizes, presumably conforming to some  standard capacities. The size of the small ones might suggest that they were mostly used to measure liquids rather than grain, but I don’t know if this was in fact the case. These six basins have a hole in the bottom, which was presumably plugged when the commodity was being added and then opened to allow it, once measured, to flow out. A depression between two of the basins (between d and e) seems to have been some sort of overflow system, though I am not clear how it worked.
Naturally, this sekoma would have been mounted horizontally and raised high enough off the ground to enable the out flow and collection of the measured commodity.
In Latin, the same sort of public measuring table is a mensa ponderaria, a term apparently coined by Italian archaeologists in the 19th century. There is a very good example at Pompeii, located in the forum.
This is made of limestone and has five main basins, each with an outflow hole in the bottom, just like the sekoma in Naxos. The table was apparently modified in c20 BC to add four new measuring holes at the corners, though, again, I am not at all clear how they might have worked. But this information does at least help us to date the table to somewhere in the 1st century BC or earlier.
The inscription across the front of this mensa records the action of the local magistrates in charge of standardising the measures in Pompeii in accordance with those at Rome:
“Aulus Clodius Flaccus, son of Aulus, and Numerius Arcaeus Arellianus Caledus, son of Numerius, duumvirs with judicial power, saw to the standardisation of the measures in accordance with a decree of the town councillors.”
Moving into the Middle Ages, I have found an image of a mesure à grains in Caylus, southern France, which might date from the 14th century, as the halle in which it is situated apparently dates from that time. I understand that there may have been more several grain measures in Caylus’s halle, of different sizes. This one is, sadly, in poor condition.

And so to the grain mesures of Chalencon, which are in an exceptional state of preservation. There are three measuring basins of differing sizes carved from two blocks of granite.

The sizes of the basins are (according to a delightfully illustrated sign):
It seems that the Chalencon archaeologists are not certain of the mesures' date but believe them to be 15th century.

Somewhat differently arranged from the earlier examples, the basins’ flow holes are located on the side of the granite blocks, but the principle remains of closing them off when the basins were being filled, then opening them (the chutes appear to have little doors) to let the grain escape.

The inscription in the illustration suggests (I think) that the basins were used to measure out both oats (avoine) and rye (seigle), both of which would be paid to the barony as rent (redevances = fees) for the land held from the baron by his/her tenants.

If anyone can shed any further light on these fascinating public measuring amenities, I would love to hear it!

Thank you for a fascinating post and also for the tribute to the wonderful and talent author, Ann Swinfen. She will be greatly missed, but her books will continue to delight for years to come.

Thank you for your kind words, Karen, and, yes, you are so right about the enduring pleasure to be found in Ann’s wonderful stories, a form of immortality.