Out and About: Reading history in buildings, by Leslie Wilson 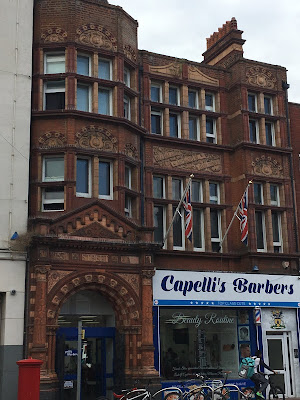 It began with this building, when I was in Reading doing some shopping. It was such a truly elaborate example of hideous Victoriana that I had to record it. When I was a kid, I was taught to despise Victorian buildings and the heavy over-ornamentation of this example reminds me why. You may admire it; who knows? It's listed, and I've seen it described online as a very fine building indeed.  If you zoom in you can see that it is the W.I. Palmer memorial building, and I think, though I may be wrong, that it was originally a temperance hall set up by the originally Quaker Palmers, of Huntley and Palmer biscuit factory fame. Huntley and Palmers, long since subsumed into multi-national capital, were the producers of award-winning biscuits sold all over the world, and major employers in Reading; their factory empire sprawled between the Kennet and the railway, both of which were used to bring in supplies. Reading's prosperity originally grew from its site on the two rivers, the Kennet and the Thames, and there were many depots on the Kennet docks, which stored the grain from medieval times onwards. 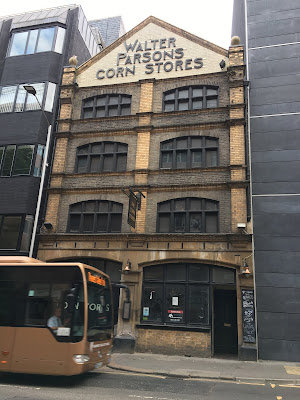 Here is one of the corn stores, just opposite where I catch my bus home. 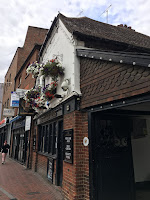 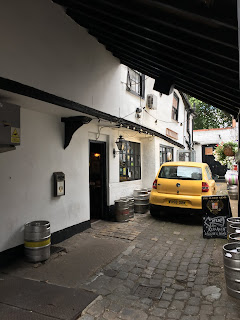 This pub is a good deal older than it looks at first glance, and for once the side gate was open so I was able to look down and see the old courtyard. It's not a posting inn, I think (we'll come to that later), but an example of how buildings can reveal themselves if you can look round a corner. It's in St Mary's Butts, where once the citizens of Reading came for their archery practice, and the site of the eponymous Minster Church, built in the local brick-flint style. Clay and flint are an essential part of the soil round here, along with chalk. Our immediate neighbours have an old clay pit in the bottom of their garden. However, the Minster Church is partly built with stones from Reading Abbey, post-Dissolution. 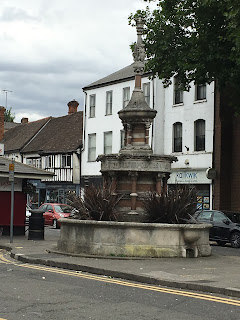 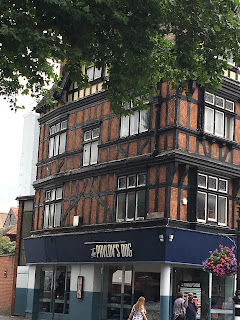 Pavlov's Dog, where my daughters used to go in their teens, is a nice piece of Victorian mock-Tudor. 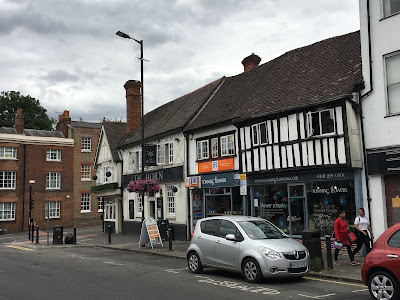 Here are some more genuinely ancient buildings in St Mary's Butts. County Delicacies, a lovely deli with a beautiful cheese counter and a wonderful range of Italian pasta among many other delights, is sadly no longer to be found in the stripy building. 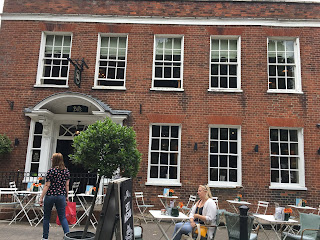 This is St Mary's old Vicarage, I think, now a pub. 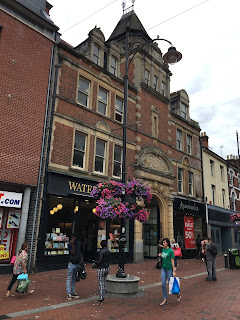 Waterstones occupies the site of the old Broad Street Independent Chapel; a temple to reading, nowadays, in Reading. 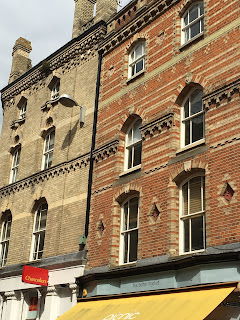 I have always really enjoyed these Venetian-style buildings on the street that leads from Broad Street to the butter market; appropriately, the left hand one used to be occupied by Nino's Italian restaurant, but this is, alas, no longer the case. They represent to me the positive side of Victoriana. 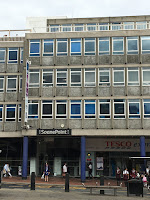 Here is the negative side of modernity; a building whose perpetrators actually dared to name after the architect Sir John Soane. The reason for this is that opposite the building is a monument contributed to Reading by Soane, in the Butter Market. I think Soane would have turned in his grave both at the naming of the building (which looks as if it had been badly glued together and might collapse at any moment) and its proximity to his graceful pillar. However, I'm ashamed to say that at one stage, Reading actually plopped a very smelly public toilet slap right against the monument. I am in favour of having public conveniences, but they need to be properly sited.
Here is Soane's monument, now happily freed from the smelly anklet of public 'convenience.' 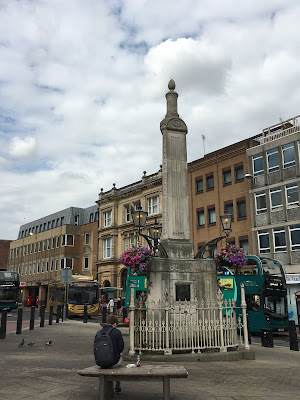 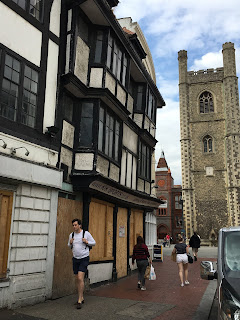 This is one of the ancient buildings in the Butter Market, near St Laurence's church, which is one of the three ancient churches of Reading, along with St Mary's and St Giles's. The half-timbered building used to house a martial arts shop, but it has been grubby and neglected for as long as I can remember, and I've lived her for 33 years. It's a great pity, as it is a piece of Reading's heritage. 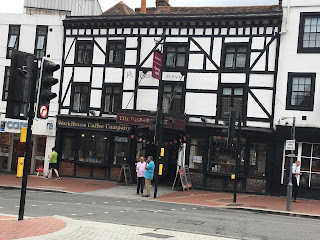 The George, however, where Dickens stayed, I believe, is well maintained. It dates from 1506. I was going over the country looking for examples of old posting inns, then met a friend in the coffee shop at the George and realised that there was a wonderful example right under my nose. Below you can see where the coaches used to draw in, and Mine Host would come bustling out to welcome the occupants of post-chaises and private carriages. 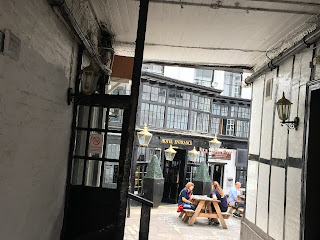 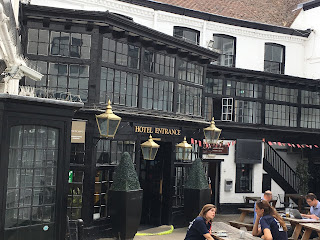 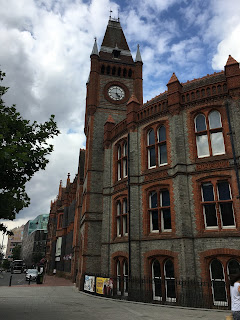 The Victorian Town Hall is rather fine, I think, but often looks like a suitable location for some Gothic horror narrative. This part of it was designed by Alfred Waterhouse, who also designed the Natural History Museum in London. We have a Pugin building in Reading, too, but I shall talk about that one in a later blog. There's a link to more info about the Town Hall at the bottom, which is worth clicking on. There was once an extension with an onion spire on it, which clashed a bit with the rest, but I for one am rather sad that it was demolished, as I'm rather fond of onion spires. 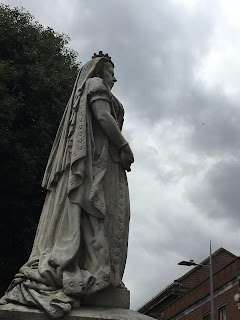 According to local legend, Queen Victoria insisted her statue face the station, so that she could imagine herself leaving Reading rather than arriving there. I would take this with a pinch of salt. 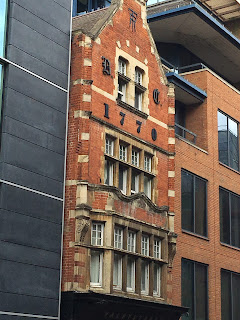 This is a rather splendid piece of eighteenth century building in the Netherlands style, which I always look at with enormous pleasure. 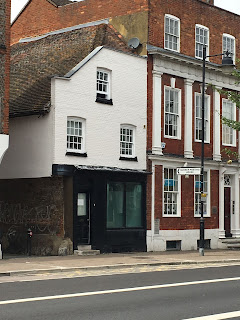 This is an ancient building in London Street, where the coaches used to drive on their way to the capital. It's at the corner of Church Street, which leads to the Quaker Meeting House, where I worship. You can see the false front which fails to hide the original, older building. In Church Street you can see many buildings which are much older inside than they look from the outside, and some of them have convenient side alleys where you can look at the half-timbering. 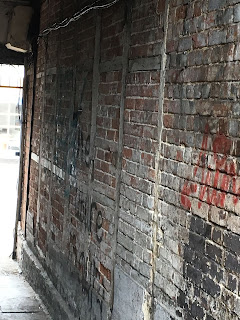 It's a pity that the local graffiti artists have demonstrated their lack of talent here, but you can see what I mean. This is the side of what was once the London Street bookshop, and if I remember right, Reading's first lending library (commercial, not public)

Here is one of the timbers, close up. 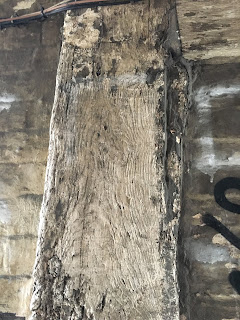 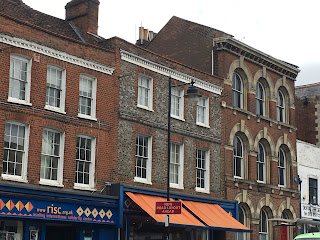 This is the front of the building, which nowadays houses Reading International Support Centre. You can see how the later facade has masked the half-timbered original building, but the meeting rooms and offices inside show their ancient provenance in half-timbering and rather irregular floors. There is still a bookshop inside RISC, which has a good selection of international authors, and it's well worth visiting. Below is another example of an ancient house wrapped up in a more recent (though hardly modern) facade. Also the Great Expectations, once a meeting hall, and before that, on the same site, there was the old Quaker Meeting House where William Penn once worshipped. There is a plaque commemorating this inside the RISC centre next door. Dickens gave readings in this building, hence the 'Great Expectations' of the title. 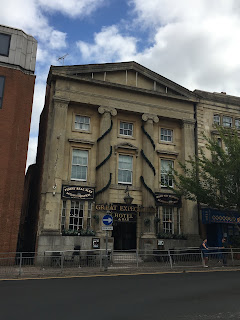 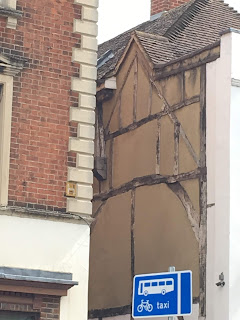 I'll be guiding you round Reading again; the Abbey is the next stop, and I hope to go into more detail. Reading may be less glamorous than Oxford, where I once lived, but it has had huge significance in national history, and Jane Austen went to school here...
http://www.berkshirehistory.com/businesses/huntley_palmer.htmlhttp://www.berkshirehistory.com/businesses/huntley_palmer.html

https://www.readingtownhall.co.uk/explore-reading-history/our-building-history
Posted by Leslie Wilson at 01:30