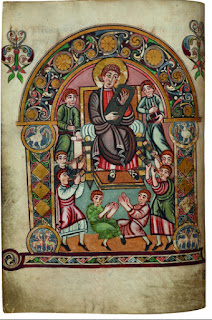 As we endure our national nervous breakdown it’s interesting to be shown by this wonderful exhibition at the British Library just how international this country was during the six centuries between the departure of the Romans and the Norman conquest. 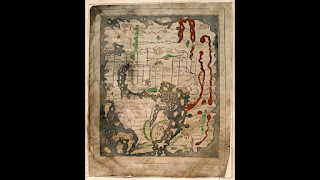 This Mappa Mundi was probably created at Canterbury in the 11th century, but is thought to be based on a Roman map. It’s the earliest known depiction of the British Isles ( in the bottom left hand corner). Two fighting figures may represent the conflict between the Saxons and native Britons that raged in the centuries after the Romans left.

The language we all attempt to use might easily have been very different. Latin continued to be the language of the most educated and English evolved from West Germanic dialects spoken by the Angles, Saxons, Jutes and other Teutonic tribes who invaded England in the fifth and sixth centuries. They brought their gods as well as their languages, as can be see by this painting here of a crazed looking Woden, king of the gods ( the German Wotan and the Viking Odin). 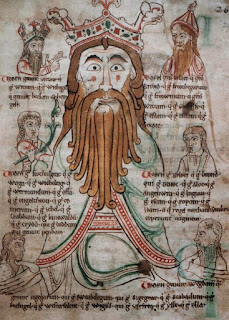 I always find the British Library an exciting building, a temple to the book with its central spine made up of George 111’s library. This exhibition reminds us that after these islands converted to Christianity books of stunning complexity and beauty were handmade and illuminated by monks in scriptoriums and then circulated around Europe. Many of the artists and craftsmen who worked on these manuscripts moved freely from country to country.

In 716 Ceolfrith, abbot of Wearmouth-Jarrow, set off from Northumbria for Rome carrying an enormous, richly illuminated bible as a gift for the shrine of St Peter. The monks sang and wept as his boat set sail and their fears were justified, for Ceolfrith died on the voyage. The bible ended up in the monastery of Monte Amiata in Tuscany, which is why it is known as the Codex Amiatinus. The oldest surviving complete Bible in Latin it has now returned to Britain after 1300 years. 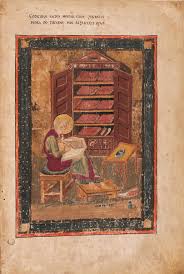 Here is the prophet Ezra writing with his feet on a stool, an inkwell on the desk in front of him and a drawing compass on the floor. Despite his dinner plate halo he looks contented, it’s a timeless vision of the joy of writing. Behind him nine manuscripts lie flat on the shelves of a cupboard, waiting to be read.

The St Augustine Gospels, which came to Britain with a Christian mission in the sixth century, are richly illustrated with classical columns and arches. The memory of grand imperial buildings must have outlived the empire. This sophisticated Latin culture was threatened by Viking raids from the eighth century. King Alfred the Great personally translated Pope Gregory the Great’s Regula Pastoralis into Old English so that people who didn’t know Latin could read it or have it read to them. The king gave away sixty free copies with a jewelled reading pointer made of ivory. 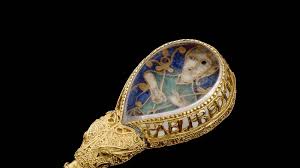 The Alfred Jewel ( lent by The Ashmolean in Oxford) has a socket thought to have held one of these ivory pointers. Gazing into its richly coloured depths you can see a golden monster writhing with serpents. It is inscribed “AELFRED MEC HEHT GEWYRCAN” – “Alfred ordered me to be made”

Other treasures include the beautifully illuminated Lindisfarne Gospels, the earliest surviving text of the poem Beowulf with its Scandinavian hero and Bede's Ecclesiastical History. The greatest Anglo-Saxon intellectual, the Northumbrian Venerable Bede, points out in one manuscript that the Earth is undoubtedly a sphere, “like a ball”. Here he is, writing away. 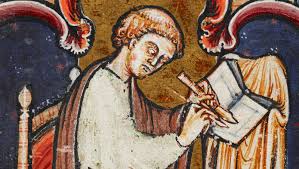 Some of the more obscure exhibits are fascinating too because they show how arbitrary survival is; for instance, a tombstone carved with runes that turned up a thousand years later, having been used as a mangle stone in a cottage.

Canterbury was a great centre of learning centuries before Oxford and Cambridge were founded. An important school was established there in the seventh century by Archbishop Theodore, who came from Tarsus in Asia Minor, and Hadrian, an abbot from North Africa. Among the subjects taught at this school were poetry, astronomy, mathematics and Greek. One of the manuscripts made in Kent was the Vespasian Psalter, an illuminated copy of the Book of the Psalms. With its gold and rich colours, the script and decorations show the influence of Roman models, indicating that Kentish culture was both wealthy and shaped by links to the wider world.

At the end of this glorious exhibition is the Domesday Book, lent by The National Archives. Commissioned by William the Conqueror in 1085, nineteen years after his Norman forces defeated King Harold at the Battle of Hastings, it is a sobering reminder that this was the most detailed survey of how and where people lived in England, and how much they were worth, until the first census in 1801. Contemporaries knew that this vast survey was an extraordinary achievement. Richard Fitz Nigel, the royal treasurer, reported that the English called the book Domesdei, the Day of Judgement, because its decisions, like those of the Last Judgement, could not be appealed.

This amazing exhibition finishes on February 19th. Many thanks to the British Library for giving me permission to reproduce these images from their website. 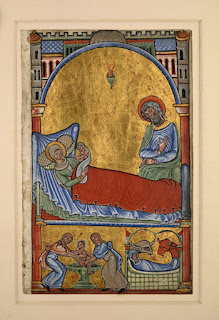 With this illumination of the nativity I wish you all a very Happy Christmas.

"The king gave away sixty free copies with a jewelled reading pointer made of ivory."

Alfred certainly knew the importance of publicising his new book.

How lovely to have this post on Christmas Day!