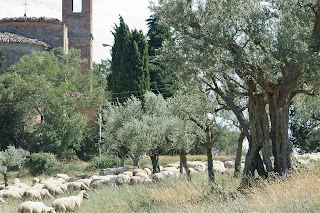 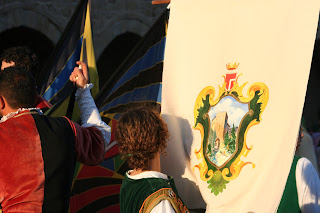 If you’ve ever wanted the experience of being in Renaissance painting then head out to any village in Le Marche during the 35-40 degree days of mid August. This is Ferragosto time – the holiday derived from Feriae Augusti – festival of the Emperor Augustus - which takes place to celebrate the end of harvest. Some celebrations are virtually unchanged in form, participation and music. The palio of Sienna is well known but lesser palio’s in smaller hilltop villages where pecorino sheep still browse the olive groves on the outskirts of the town walls, are perhaps even more steeped in their traditions.

The word palio comes from the palium or piece of precious fabric that was given to the winners of horse races in ancient Rome. And most celebrations of Ferragosto involve a horse race or jousting race between different quadrants of the town or village. The hilltop town of San Ginesio on Wednesday 15th of August this year, was no exception. And while I can’t explain the intricacies of the parade I watched through shimmering heat against the backdrop of an unchanged medieval town square … it was incredibly regal. No one speaks or shouts as they walk the route to the jousting grounds where the cavalieri will compete for the palio… each group named after one of the four ancient portals to the town and dressed in the colours of their rioni.

I’ve always thought people in Renaissance paintings have a certain look that a modern face lacks. But in San Ginesio I saw figures and profiles and expressions one might expect in artwork from the School of Rimini under the influence of Giotto. How did this page boy get that look? Or these young men shouldering their crossbows display such bravery yet at the same time such vulnerability? How were the women with their long necks and calm profiles able to show such regal dignity and yet such exquisite womanliness?

These weren’t modern people. They had walked straight out of a Marchigianan painting and the 13th century stone walls and arches and far vistas of hills and sheep were merely painted backdrop. 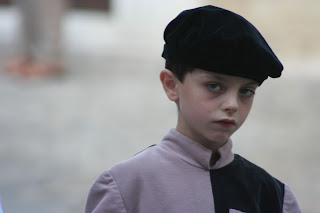 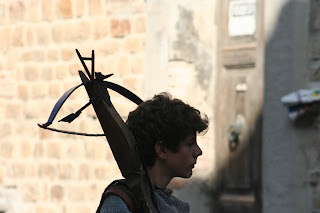 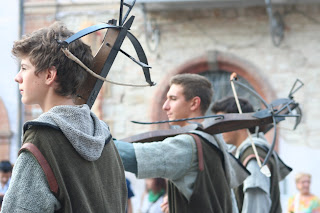 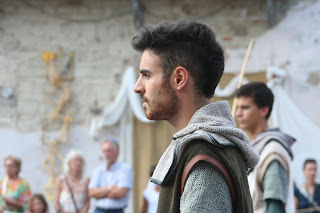 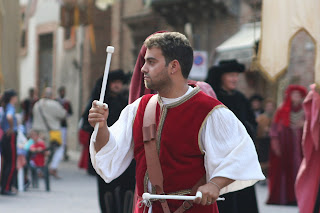 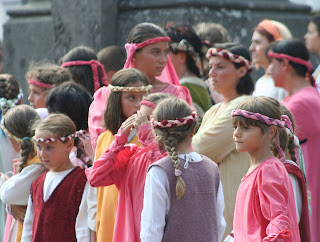 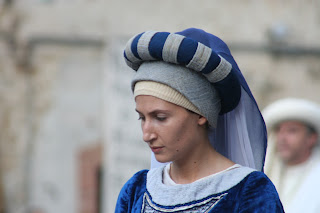 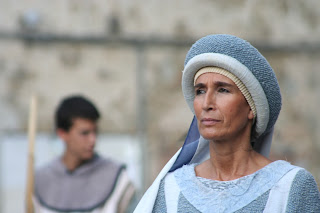 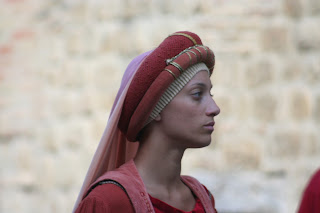 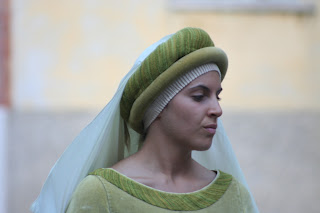 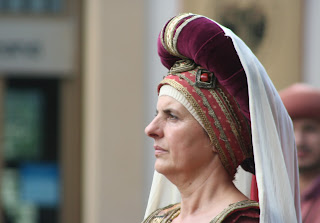 Stunning portraiture--and just as you described them--not a modern people.

Beautiful pictures! The one of the little boy should be entered in a competition. Thank you - what a lovely post.

The faces take my breath away - thank you so much!

I always feel the same about the Sienese Palio which, on the day after Ferragosto, my contrada won, in case anyone hasn't heard me babbling incoherently about this feat.

And of course Ferragosto is also the Assumption so very much a bank holiday and celebration in most RC countries.

Wonderful photos as ever, Dianne. Amazing the way that history shows in the dignity of the faces and the carriage of each person's frame.

Di the photos are simply stunning. So enjoyed the article---well done!

Knew this would be a stunning post, Dianne! Fabulous, though I shudder at the thought of how HOT it is...
But this is something that struck me eating pizza in Florence....the people all around us were straight out of Renaissance and pre-Renaissance art, lots of them.
Wonderful.

Thanks for all the comments... esp appreciated as I know everyone is busy with it being a Bank holiday week-end here in the UK. It was pure luck to catch that moment with the page boy. I certainly don't know any of the technical stuff. I was using a long lens but he seemed to look so directly at me. I'd love to know what he was thinking... we could start a caption competition!