Sex, Marriage and the Church by Manda Scott

One of the joys of the writing life (as opposed to the veterinary life I left behind at the turn of the millennium) is having time to read the morning paper.  These days, courtesy of a home broadband connection that brings the world to the tiny rural outpost where I live, I can read key commentators in organs other than The Independent.    As a result, rather a lot of my books have started their life in an inner-page article that has sparked a train of thought that leads, by the process of magic and alchemy none of us understands and on which each one of us relies, to a hundred and fifty thousand words set in a different era, describing the lives of people we have never met, engaging in acts that, even with the best battle re-enactment group, we could never hope to experience in real life.
Once in a while, though, the process moves in reverse and I read in modern prose, something I discovered long ago but have so far confined only to fiction. George Monbiot's recent op-ed on the modern invention of marriage is one such. 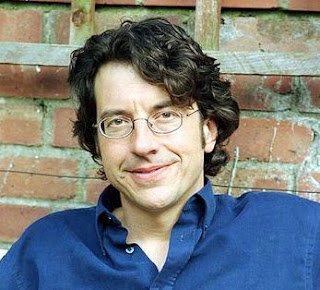 Early on in the research for Boudica - back in the days when I was still a vet, had no historical training whatsoever and the only thing pushing me forward was the fact that I'd done a vision quest with the question 'what do you want of me?' and the answer had been to write Boudica* - I began to realise that my assumptions about our pre-Roman predecessors were wholly wrong. Like everyone else, I had swallowed the Victorian myth that we were a bunch of hide-wearing savages communicating in grunts and whistles, and that we needed the ordered, organised, benevolent, road-building, peace-keeping Romans to grant us civilisation. After all, look what happened when they left four and a bit centuries later: the Dark Ages fell on us, we were subject to wholesale Anglo-Saxon invasion, with all the rape and pillage that implies and the eventual indignity of perpetual occupation by the Normans. 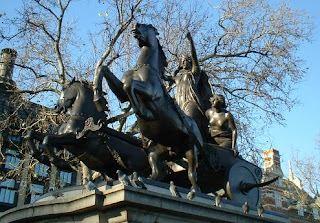 But all that is for another blog, another day. What's interesting now is who we were before the Romans 'wrought their desolation and called it peace.' Tacitus gave those words to Calgacus in the lead up to Mons Graupius, which is a fairly strange thing for a Roman noble to say - unless it happens to be true. And true it is: it doesn't take much scraping beneath the surface to realise that we were a highly artistic, literate, educated people, capable of outstanding works of craft and art, of literacy and spirituality.

In the context of Monbiot's article, it's our relationships that were most interesting. Marriage as we know it, in which the ownership of a woman passes from her father to her husband, was entirely foreign to us at the time of the invasion - and remained so for several centuries. Salway's excellent 'A History of Roman Britain', contains a reference to a conversation between a Roman matron and the 'wife' of a British chieftain.I can't find it now, but the words are written on my liver and will be found at post mortem examination when I die.

The Roman woman is castigating the Briton for her 'loose morals'. The Briton replies, 'We consort openly with the best of men. You allow yourselves to be debauched by the vilest.' The conversation (allegedly) took place in the fourth century, after over 350 years of Roman rule and the imposition of Roman concepts of marriage and yet even then, we were not yet domesticated. Even then, we still clung, it seems, to the tribal ways of living where the concept that a man might own a woman, either as daughter or wife, were still alien.

Monbiot’s article doesn't go back as far as the Romans: I wish he had, and perhaps that's an column for another week - but he does examine in briefest, but fascinating terms, the history of marriage since the end of the first millennium, including particular reference to Boswell's work, Christianity, Social Tolerance, and Homosexuality which documents homosexual marriages performed by clerics dating back to the fourth century. (A rather more populist reading of that work is available here.)

As always, when we're dealing with modern interpretations of ancient texts, there are issues of translation and therefore scope for controversy, but one of the most striking - and incontrovertible - instances of gay marriage, appears on an icon in the Kiev art museum. 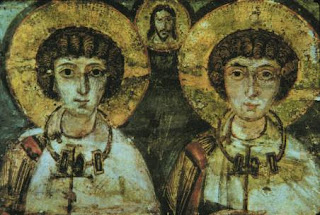 The icon records the marriage of two saints: St Serge and St Bacchus, two Roman soldiers who became Christian martyrs. In the icon, they are in the position of marriage, with Christ as the 'best man’. Later (and more controversial) instances record the "Office of Same Sex Union" (10th and 11th century Greek) or the "Order for Uniting Two Men" (11th and 12th century). You'll note there's no office for uniting two women, but the 14th century Serbian Slavonic ritual recorded "Office of the Same Sex Union", uniting two men or two women, had the couple having their right hands laid on the Gospel while having a cross placed in their left hands. Having kissed the Gospel, the couple were then required to kiss each other, after which the priest, having raised up the Eucharist, would give them both communion."

It is only in the nineteenth century, it seems, that heterosexuality became so rigidly normalised; yet again, the Victorians had to impose their post-Roman vision of Empire on a pliant public, with repercussions that are felt in the present. day. But it's not who we were. From all kinds of sources it seems that we were a polyamorous, tribal nation and the restrictions of the nuclear family have never really suited us.

When I finished the Boudica series, I travelled round the country giving readings based on my premise, 'this is who we were, this is who we could be,' and it seems, that, a few advances in technology and a whole fistful of social conservatives notwithstanding, we might almost have reached parity with our ancestors of the late pre-Roman Iron age.

* A hare had died. And all her young, it had mattered to ask that question when clearly what I was about to do, which was write the next contemporary crime thriller, wasn't what was wanted
Posted by Stroppy Author at 01:01

Pre-Roman British culture is full of surprises to people who see our modern world as 'more developed', as if we 21st century dwellers are higher up the scale of evolution. In my modest researches into past eras,including the life of the British pre-Roman tribes, I've come to realise that poeple of nay age are more alike than different. I'm only sad that those long lost voices, which we hear in fits and starts, can't speak to us more clearly. Our view of past people is inevitably skewed towards the outstanding ones: the rulers, the military, the religious, the rich. I'm equally interested in the ordinary people, the labourers and, often, the women, whose lives go undocumented.Wouldn't it be great to have a time-machine?

Wonderful post Manda, and it is really good to see you join The History Girls. I sincerely hope that we shall very soon go back to being a properly civilised society.

Thank you both... and yes, indeed, a time-machine would be lovely, though I fear what extremists would endeavour to do with it. And yes, sometime soon, we might reach a level of modern culture we could truly called civilised. It might even happen in our lifetime...

Wonderful post, and I agree with Pauline's comment too. I have been reading an Oliver Sacks book, hard on the heels of some 16 century medical theory, & have been astonished to find hugely valid psychological ( as we would now say) insights mixed up in the rejected 16th c theories. Insights that medical theorists seem to have lost sight of for centuries, I suppose by assuming that 16th c theories were simply primitive. Thanks for this post, Manda!

Hi Manda, thanks for a great post about the slippery nature of 'progress'. Am also intrigued and puzzled by the vision quest...

I hope you don't mind, I've shared this on my facebook, good reading :)

Another excellent and thought-provoking post, Manda. I'd like just to add that I'm constantly astonished by the numbers of people who don't realise that priests themselves used to be married, with the living often passing from father to son. The ban on marriage only came into full effect in the 12th century and look where that got the church . . .

And another thing. We forget that we have only increased our knowledge, not our intelligence.