She was a game girl was Mary Stuart, and escaped from ‘secure’ premises quite a few times. The most widely recorded, and certainly the one I remember being told in my childhood was when, disguised as servant, she escaped from Loch Leven aided by the young lad, Willie Douglas. 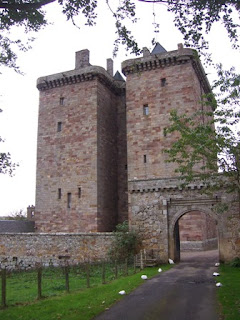 While researching Spy for the Queen of Scots the escape that most impressed me took place at Borthwick Castle where, poignantly, she spent her last night with the Earl of Bothwell. It is a forbidding fortress with hugely thick walls. Lord Borthwick offered Mary shelter when rebel Lords threatened to kill Bothwell after Mary married him. Immediately the would-be assassins gathered an army, closely pursuing the newly weds, to besiege the castle. Once Mary was safely inside Bothwell daringly slipped out of the castle to gather his men to defend the Queen:

Spy for the Queen of Scots is told in the first person of the main character, Jenny, who is Mary’s companion. That night Mary and Jenny sit together, huddled under a blanket in the window embrasure of the Queen’s bedroom, praying that Bothwell will elude the surrounding rebel forces… 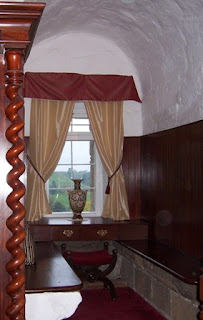 ‘Do you love him?’ I asked Mary.
‘He is going out to risk his life for me. How can I not love him?’
We held onto each other until dawn, when we heard the blast of a hunting horn from the distant hills. Then we knew he’d won free, whereupon we both gave way to a fit of weeping.

The rebels called on Mary to surrender, telling her they’d sent for heavy cannon to bring down the castle walls. She refused to betray Bothwell and donned disguise to make her own bid for freedom. 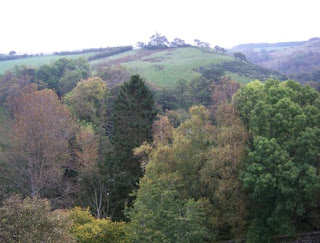 Borthwick Castle is now a private hotel http://www.borthwickcastle.com/  You can book dinner (delicious!) to eat in the great hall, or indeed hire the whole castle for a weekend for family and friends! Situated not far from Edinburgh in beautiful countryside, it has the most hospitable staff who will happily give you a free guided tour before your meal to tell you of the history of the wild Border Clans and the ghosts they have heard laughing and chatting in the corridors. You can see the window Mary climbed out during the night of her own escape. You can stand in the top towers and look at the hill beyond and imagine the campfires of the rebels. You can sit in the window alcove of her bedroom and look down into the forest as she did, hoping that her lover would not get caught by the vengeful Scottish rebel Lords. I thought of her, orphaned, scarce out of her teens, twice Queen, twice widowed, a mother with no access to her baby, betrayed by family and former friends and in dire danger of losing her throne and her life.  With Research comes Insight. With similar insight I hope that historians might judge her less harshly. 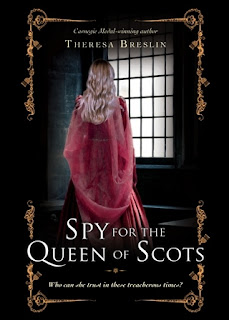 Debates with leading authors will be streamed live world-wide from 17th – 21st August during the Edinburgh Book Festival at a special World Writers’ Conference. These will be interactive – you might like to join in!
Theresa Breslin events in EDINBURGH this August include discussing the Researching & Writing  Historical Novels with fellow novelist Berlie Doherty (author of  Treason)  on 27th August plus an event about the Illustrated Treasury of Scottish Folk and Fairy Tales, illustrated by Kate Leiper on 28th August – both at the Edinburgh Book Festival.
Divided City - Conversation and Performance extract from the musical is on at the Festival of Spirituality and Peace Venue on 25th  August with excerpts from the play at the closing ceremony on 26th August
Posted by K.M.Grant at 00:30

Lovely post Theresa! I will try and watch the live stream if I can work it out! Wish I could be live at the Festival and see you in person.

Thanks Adele. The debates are fascinating. It's a Wonderful Wordfest with 50 writers in the tent contributing. Check out links #worldwritersconf Am looking fwd to Patrick Ness talking on Monday 20th about Censorship.