For three days Olympic cycling has taken over Bushy Park and the surrounding roads.  Miles of barriers and bunting and Olympic flagpoles.  It’s been a festival atmosphere where we live, in Teddington, and the roar of the crowds drifted over the park this afternoon as ‘Wiggo’, Bradley Wiggins, fresh from his Tour de France triumph, won gold.  He flashed by me on Chestnut Avenue (conceived by Sir Christopher Wren) en route to Hampton Court Palace and victory.  The herds of deer that normally roam the park have been keeping a very low profile.  It was so good to see Henry VIII’s old residence as a backdrop for the crowning of a British sporting hero.
And what did you all think of the 2012 Opening Ceremony and its historical agenda?  I loved the whole daring concept of the evening: the crowd-pleasing James Bond and Mr Bean sketches,  of course, but also the idiosyncratic attempt to introduce the history of Britain into the spectacle.  It was probably mad to try, but they pulled it off, and, oh, those chimneys and the smelting of the Olympic rings!  It was the dramatic equivalent of rendering the Decline and Fall of the Roman Empire in a haiku.  Thanks, I suspect, to screenwriter and Carnegie medal-winning children’s writer Frank Cottrell Boyce, who did the storyboard, not only British history but also children’s literature (and children) were celebrated in the spectacle.  It certainly raised a cheer from me.

Versailles and the Affair of the Poisons: Part II

In June I  wrote  a post about a 17th-century French scandal involving poisoning and focused on one individual, the Marquise de Brinvilliers, who was burned for her crime.  As it turned out, the Brinvilliers case was only the tip of the iceberg.  Once La Reynie, Chief of the Paris Police, started to dig about, and discovered the sheer scale of the problem, he determined to stamp it out. It was not uncommon, it seemed, for people across the social classes, including the nobles at Versailles, to procure poison from individuals masquerading as harmless ‘fortune-tellers’.   The Chambre Ardente, a special tribunal, was set up in 1679.  It was to meet in secret to investigate the affair.  One notorious purveyor of love potions and poisons to high-ranking individuals at court was Madame Voisin.  The woman was arrested, interrogated and tortured.  She talked...and talked.  Every day the names of more and more noble courtiers were dragged into the affair:  the Duchesse d’Angouleme, the Princesse de Tingry and even the maid and sister-in-law of Madame de Montespan, the King’s mistress.   The whole of France talked of nothing else. “Men’s lives,” said the horrified La Reynie, “ are up for sale as a matter of everyday bargaining; murder is everywhere – in Paris, in the suburbs and in the provinces.”   That persons close to the King were implicated was especially worrying – partly on account of the scandal, but more importantly on account of Louis’s safety.

Despite La Reynie’s zeal, it was when witnesses started testifying that the King’s mistress herself, Madame de Montespan, had had regular dealings with Madame Voisin (an accusation which Voisin never confirmed) that things started to fall apart.  As far as the King was concerned it was unthinkable that she should be tried and imprisoned.  The tribunal consequently collapsed.  In order to avoid Madame de Montespan’s involvement, all evidence implicating her was to be suppressed by means of the lettre de cachet (detention without trial).  Nancy Mitford (in The Sun King) notes the final tally of punishments meted out by the Chambre Ardente:
[...]36 burnt to death after torture; 4 sent to the galleys; 36  banished or fined (mostly gentlefolk) and 30 acquitted.  The fortunate 81 who remained and who benefited by lettres de cachet [insofar as they weren’t executed], were chained up in dungeons all over France for the rest of their lies, in solitary confinement.  If they spoke to their gaolers they were whipped – Mme de Montespan’s name must not be bandied about the French prisons.  Thirty-seven years later some these people were still alive. 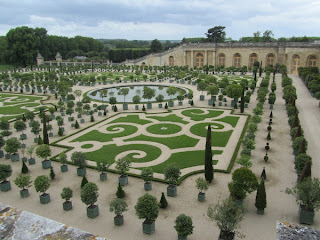 I first read about l’Affaire des Poisons while doing some preliminary research at Versailles.  I remember looking out on the exquisite grounds and thinking how horribly deceptive appearances can be.  But then, that’s why we invented novelists and historians...

And is there any evidence that anyone really was procuring poisons, or was the whole thing a mare's nest from start to finish? Sounds just like the witch trials - and another example why evidence from torture is a really bad idea on every level.

Thank you, Linda, for a fascinating story - and for the filip you have given me that someone of your emminence has quoted from a book that I actually have on my own shelves, The Sun King.

The difficulty (now and then) is proving cause of death. Fear of poisoning meant that any unexplained death could be attributed to foul play. Louis's sister-in-law, for instance, Henriette-Anne, was widely suspected to have been poisoned by the King's brother whereas contemporary historians put her death down to acute peritonitis. And, as you say, how can evidence procured by torture ever be acceptable on every level? On the other hand, poison was very easy to get hold of, and one good thing that came out of the Chambre Ardente was the regulation of its production.

Thanks so much for your comment, Brian, I am very fond of Nancy Mitford's The Sun King. And, not being eminent at all (!), I am very fond, like Alice, of books with lots of pictures and conversations. It was Mitford's book which got me interested in Louis XIV many years ago.

What an appalling story! Imagine being shut up for decades and not allowed to speak to anyone, just to save the reputation of the King's mistress!

Loved this post and SNAP about the SUN KING. I have it too and that was the book that turned me on to the whole French history thing....You will be missed. Keep in touch!

Thank you, Sue and Adele - even though I shan't be regularly contributing posts to the blog any more, I shall certainly be a frequent visitor to the brilliant History Girls!