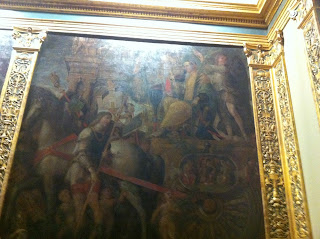 One of the great challenges of being a writer is to decide which story to tell. Let’s take today as an example when I went to visit the Mantegna’s The Triumph of Caesar at Hampton Court Palace.

One story is ours. We visited the Mantegnas at Mantova when we went to watch our eldest son play rugby in Italy about six years ago. We were amazed to discover that his most famous work was installed at Hampton Court Palace mere miles from our home in Richmond. Getting to see the Mantegnas became an ambition continually thwarted by family life, weather and who knows what for six long years. Finally our mission was accomplished a couple of weeks ago. It was a great day out, lunch at the pub by the river in one of our few days of sunshine, a walk in the garden but the paintings themselves were, if I’m honest, a  little disappointing. Massive in proportion and hugely ambitious each huge panel showing a different aspect of the victory parade but the canvasses were poorly lit and too dark to pick out all of the detail.

The second story is that of Mantegna himself and the Prince who commissioned him, a man inspired to emulate the success of Caesar and doomed to fail. I suspect the hawk nosed, thin lipped Caesar of the paintings to be modelled on Mantegna’s patron. Mantegna himself was a fifteenth century super star, famous in his day for his mastery of his perspective, his optical illusions and obsessed with the art of the classical period. The Roman bust in the exhibition was owned by Mantegna who, like us, took his history seriously and researched every detail of Caesar’s period in order to bring the parade to life. The scene is set so that the viewer effectively joins the parade, enters the distant past, hears the trumpets, sees the loot, the strange beasts, the exotic slaves is jostled by the crowd, breathing in the exotic scents of foreign plants and perfumes from other worlds. Inevitably the painter tells us as much about his own period as the past, just as we re-envision the eras of our stories through the distorting lenses of our own aesthetic and twenty first century sensibilities.

Then there is the story of the paintings themselves, brought by boat to Hampton Court as a symbol of status and wealth, damaged in transit, over painted then cleaned and retouched so that Mantegna’s own hand and stunning draftsmanship emerges only occasionally. In those all too few moments the paintings spring into focus and exert something of their original power, seeming as vivid and as deceptively truthful as they must have appeared to Mantegna’s first audience.

I must say I am obscurely pleased to have seen them at last -if only to satisfy my curiosity and to be reminded of the multiplicity of stories that surround us. There is no excuse for my occasional complaint that I don't know what to write about.

The story that engaged me most is that of the subject of the painting: the triumph that preceded Caesar's murder by no more than a couple of years. Ironically the paintings were acquired by Charles I whose own fate echoed that of  Caesar's not too long after. These paintings represent so much ambition, the painter's, his patron's, his subject's, the king who bought it, even mine: so much hubristic triumph, so much disaster.

Email ThisBlogThis!Share to TwitterShare to FacebookShare to Pinterest
Labels: Charles I, Mantegna, NM Browne, The Triumph of Caesar

Great post - I love the way you've linked the paintings' subject with their story as prized possessions. And yes, as a writer how often am I paralysed by CHOICE? Which angle to take, which story to tell? I have been to Hampton Court several times, but - I'm ashamed to say - never looked properly at the Mantegnas. I shall next time...