The Flying Monk, and Other Aerial Characters - by Katherine Langrish 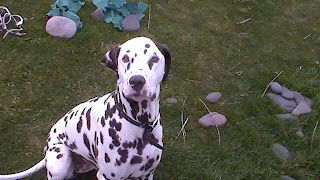 Our dog Polly, now two years old, was born near Malmesbury in Wiltshire, a sweet little hillside country town built around the remains of a huge medieval abbey. And I mean HUGE. It was founded around 676, built and rebuilt, and by 1180 possessed a 431 foot spire, taller than Salisbury Cathedral's. So it must have been pretty catastrophic when, circa 1500, the spire was struck by lightning and collapsed; and then the west tower also fell down fifty years later and – well, what’s left is impressive but nothing compared to past glories.

For a small place, Malmesbury has a colourful past. A gravestone in the churchyard commemorates the death in 1703 of a barmaid called Hannah Twynnoy who was killed by a tiger: 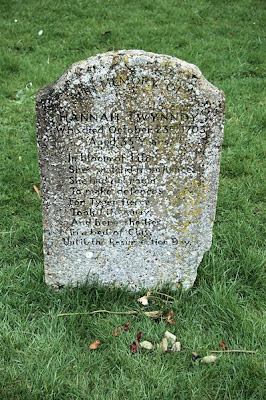 In bloom of Life
She’s snatched from hence
She had no room
To make defence
For Tyger fierce
Took life away
And here she lies in a bed of Clay
Until the Resurrection Day.

The tiger belonged to a travelling circus which parked in the inn yard. Like Albert in ‘Albert and the Lion’, it seems that Hannah could not resist teasing the animal - with fatal consequences. 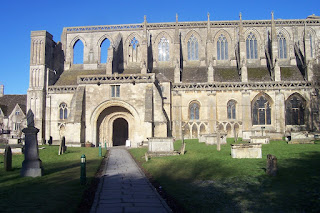 A luckier and much earlier Malmesbury character was described by the chronicler William of Malmesbury, a monk of the abbey who wrote several books including a history of the Kings of Britain up to the Conquest. It is this book in which he details the magnificent escapade of the flying monk. Some time in the early 1000’s, the monk Eilmer of Malmesbury flew something like a primitive hang glider off the top of one of the abbey towers:

“He had by some means, I hardly know what, fastened wings to his hands and feet, so that he might fly like Daedalus, and collecting the breeze upon the summit of a tower, flew for more than a furlong (220 yards). But, agitated by the violence of the wind and the swirling of the air… he fell, broke both his legs, and was lame ever after.” Enthusiastic despite his injuries, Eilmer declared that he knew what had gone wrong: his glider needed a tail. He was probably right. And he wanted to have another go, but his abbot – who must have been a long-suffering and enlightened man to allow him to try in the first place – utterly forbade it. 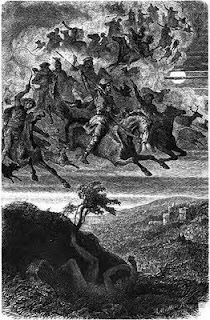 My book ‘Dark Angels’ (‘The Shadow Hunt’ in the USA) is set in the late 12th century, and I spent months researching life in a monastery and in a (already old-fashioned in the twelfth century) palisaded motte-and-bailey castle. I wanted to immerse myself in the stories 12th century people told and sang, the legends they believed in. There is no better place to discover this than the medieval chronicles themselves. They are irresistible once you get going, full of colour and vigour and human emotions. Take an example from the Peterborough version of the Anglo Saxon Chronicle, the progressive year-by-year account of important events which was kept and copied up with some slightly different variants from 1042 to 1155. The thing to remember is that the Anglo Saxon Chronicle was written in the vernacular – in Old English, not in Latin. Hence the name. This meant that after the Norman Conquest, as far as newly appointed Norman French abbots were concerned, the Chronicle was effectively written in code. These abbots could read Latin and French; they couldn’t read English. So for the year 1127, the monk writing the chronicle is free to say exactly what he thinks about his new abbot, Henry of Poitou, who has been appointed by the King:

“Thus miserably was the abbacy given, between Christmas and Candlemas, at London, and so he [Henry] went with the king to Winchester and from there he came to Peterborough, and there he stayed exactly as drones do in a hive. All that the bees carry in, the drones eat and carry out, and so did he…”

So far, vivid enough – but this is merely the prologue to a piece of vituperation which has become famous as one of the earliest English accounts of an apparition of the Wild Hunt. The anonymous but angry chronicler continues:

“Let it not be thought remarkable when we tell the truth, because it was fully known all over the country, that as soon as he came… then soon afterwards many people saw and heard many hunters hunting. The hunters were big and black and loathsome, and their hounds all black and wide-eyed and loathsome, and they rode on black horses and black goats. This was seen in the very deerpark of the town of Peterborough… and the monks heard the horns blow that they were blowing at night…

“This,” our chronicler concludes darkly, “was his coming in – of his going out we can say nothing yet. May God provide!”

The Anglo-Saxon Chronicle's account of the Wild Hunt is entirely due to the Peterborough monks’ hatred of their new, foreign, and greedy abbot. It is a splendid piece of mud-slinging, which has preserved an even more splendid bit of folklore.

This sounds wonderful! I probably have some of this among my university texts, somewhere on my shelves. I know I've got some William of Malmesbury writing there...nothing like primary sources to give you the flavour of the times!

And goodness, what an ending for a barmaid in a small town!

Goodness - isn't it interesting how other people see us. I live in Wiltshire - and love Malmesbury, the solidity of the Abbey that towers over everything. But I'd never thought of it as a 'sweet little country town!' It's history is as rich as any town in Wiltshire, but it has its factories (Dyson was a huge employer for a long time), and its rough corners. It's still a vibrant, complex, living, market town!

Love that Epitaph!! And the whole post is very interesting. Btw, do read THE GALLOWS CURSE by our fellow History Girl, Karen Maitland, set in 1210. I think it's up your street! I loved it.