ON OBSOLESCENCE, by Jane Borodale 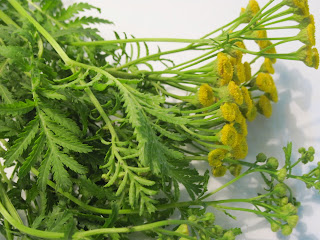 One pudding very much out of ure these days is a tansy. Even the inimitable Dorothy Hartley has nothing to say in Food in England about tansies – not even about their lengthy incarnation as Lenten cakes. Geoffrey Grigson at least gives them a mention but rather discouragingly says that they are not to be recommended.
But, presuming that obsolescences should be looked at individually on a case-by-case basis, I thought I’d share with you a rather slap-dash experiment I’m doing today in the spirit of historical investigation. 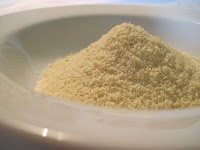 Having known theoretically what a tansy is for a while (one of my characters in THE KNOT, the florid Reverend Tope, enjoys one on p309, for example), in truth I didn’t know how it might taste beyond being a ‘bittersweet milky egg dish’. Nor did I really know if one should be making a tansy cake at all, as the herb does contain a powerful insecticidal substance called thujone that is highly toxic in excess. Too much tansy (the herb) causes abortion, venous congestion of the internal organs, and convulsions. But a moderate amount is apparently digestive and good against worms. I don’t have worms, but am still feeling mighty curious. 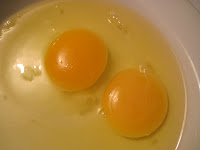 Just a small sprig, I say to myself, going out to the garden to pick a handful or two before it starts raining – it’s clearly in the dose. (NB. Am no expert but I definitely wouldn’t try the following recipe at home if pregnant.) Maybe this is why no-one makes them any more? It’s the Russian roulette of desserts. Or maybe they just taste bad. Gerard claims they ‘be pleasant in taste and good for the stomache, for if bad humours cleave thereunder, it doth perfectly concoct them and carry them off.’ The bad humours would be left over from the Lenten fasting, all that consumption of fish engendering moist and phlegmatic imbalances in the body. This reminds me that probably I should be doing this earlier in the year, when the leaves are young and tender, not just as the plant is coming into flower. 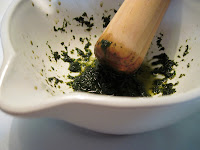 Well let’s see. I’ve chosen one of Hannah Glasse’s versions from her Art of Cookery Made Plain and Easy (1747) because it sounds the most edible. I’m going to quarter the quantities below for the size of my dish, and will brazenly omit the spinach juice, because some other recipes didn’t have it (and there was none at the Co-op this morning): 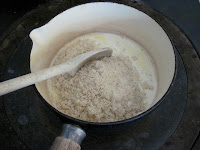 To make a Tansey.
Take ten Eggs, break them into a Pan, put to them a little Salt, beat them very well, then put to them eight Ounces of Loaf-Sugar beat fine, and then a Pint of the Juice of Spinage. Mix them well together, and strain it into a Quart of cream; then grate in eight Ounces of Naples Bisket, or white Bread, a quarter of a Pound of Jordin Almonds, beat in a Mortar, with a little Juice of Tansey to your Taste; mix these all together, put it into a Stew-pan, with a Piece of Butter as large as a Pippin. Set it over a slow Charcoal Fire, keep it stirring till it is hardened very well, then butter a Dish very well, put in your Tansey, bake it, and when it is enough, turn it out on a Pye-plate.
Overall impressions:
1. The tansy juice, (which I’ve got by grinding a fair few leafy sprigs in a pestle and mortar with drops of water, then squeezed out into the cake mixture, leaving the fibres behind) is a disconcertingly dark green. It has an extraordinary aromatic, balsamic smell I could best describe as half mint, half flyspray. 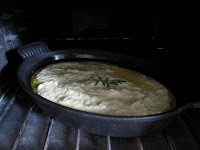 2. It's not difficult to make. At all. Unless trying to photograph at same time.
It’s no looker, this tansy, but all-in-all I’d say of late it has been maligned, ignored and almost lost for no reason at all. Will I make it again? Possibly; my smallest child adored it. I should add that the name of the tansy herb Tanacetum is from the Greek athanasia, or ‘immortality’. The name might refer to the old practice of packing corpses with tansy leaves to keep them preserved before burial, or maybe it’s just that in the long run some things never die, even so-called obsolete, outmoded, out-of-fashion puddings...
What would you bring back from the brink? 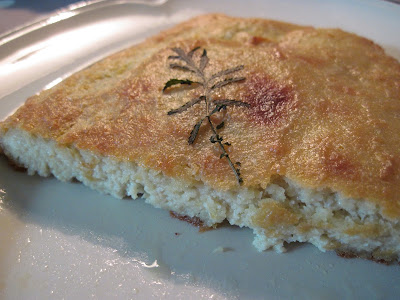 Most surely elderberry wine-which h likely went out of fashion due to the labor intensive process-here is a link to a video demonstration:
http://youtu.be/dMzdLIGlmFI

Blancmanger, basically white chicken, rice, almonds and a little saffron -- for the very noblest palates and stomachs -- tasted really fantastic when my husband and I made it! Thanks for this interesting re-creation.

What a tasty post! I loved it. Never heard of tansy...

I would bring back the Roman *libum* a cake made with salty white cheese and honey which the Romans offered to the gods!

Cato, On Agriculture 75
How to make a sacrificial cake. Crush two pounds of cheese in a mixing bowl; when that is thoroughy done, add a pound of wheat flour or, if you want the cake to be lighter, use half a pound of fine flour. Mix well with the cheese. Add an egg. Mix together well. Make it into a loaf, put it on leaves and bake slowly on a warm hearth under a crock. When cooked, coat with honey.

And I'd love to try real Roman *garum* or fish-sauce, like a cross between Worcestershire sauce and Thai Fish Sauce... only different!

Gosh - edible research! Why have I never tried it? Although I did once make a syllabub according to a medieval recipe. Unfortunately it was 20 years ago and I can't lay my hands on it, but it did involve sherry (sack) and sugar and lots of whipped cream.

I'd love to try some Tansy Pudding, Pepys is always eating it. I once tried to make caudle - a spicy, eggy, wine drink.

Did you use two and a half eggs? And what about the Naples bisket?

And Caroline, isn't Garum made from fish guts? I think even if I were not vegetarian I would pass on that one!

What a super post! That cheese and flour thing of Caroline's sounds a bit like a Roman version of a cheese scone!

Ooh, pass me a slice!

Am loving all these ignored dishes. The Roman libum sounds VERY good. I once made a Roman baked egg and honey dish that was popular in our household.

Mary - re eggs, I used 2. I thought that would be ok as mine were going to be much larger than Hannah Glasse's eggs. And one had to choose between Naples bisket OR white bread, not both. (Other recipes suggested manchet rolls. Some also suggested baking the egg sauce in a pastry case.)

Inspired by Jane, I will blog about making a Roman libum (honey cake) and also dispel some myths about garum! ;-)

I must try it, but will have to plant tansy first. I use sweet cicely for sauces, it is a native plant that tastes very like chervil, and substitutes deliciously for that herb, plus it grows like a weed in a secluded part of the garden, whereas chervil has to be grown from seed and the slugs like it too much for that to be an easy task!

PS. Fascinating to discover that blancmanger is quite different from blancmange - sounds gorgeous.