Circle of Shadows and Gengenbach by Imogen Robertson

Circle of Shadows is due out in paperback tomorrow, and as the novel is set in Germany that gives me a chance to talk about what a wonderful place Baden-Württemberg is to spend time. For those of you who don’t know it, please do put it on your ‘to visit’ list at once. The scenery is magnificent and the whole region is packed with enough castles, cathedrals and museums to satisfy the most committed of culture hounds. My partner Ned and I spent some blissful busy weeks there and can’t wait to go back.


I spend a lot of time researching my novels in various libraries, for Circle the excellent library at the German Historical Institute of London was particularly useful, but nothing beats walking the ground. I like doing the walking research as soon as possible after I’ve started working on a book. That way I can fold in all those memories into my plans and be open to inspiration before I have a plot too fixed in my head. Wow, that sounds pretentious. It’s often also a good excuse for a holiday once the last novel is put to bed!

So I went to Germany with Ned, a notebook and a rough idea of where my novel might take place and when, but that was about it. We went to Freiburg, and Karlsruhe to look at palaces and museums and out of Baden-Württemberg a little way to see Trier and Speyer, both ancient and beautiful cities. Going to Gengenbach was a chance to walk in the Black Forest and get a feel of a smaller town. When we arrived I had no idea how important it was going to be in the finished novel.

Gengenbach was made a free city in the 14th century, almost completely destroyed at the end of the 17th during the Nine Years’ War, then rebuilt in the 18th century so it is to that period (luckily enough for me) that you feel you are returning to when you visit. The magnificent town hall was built in 1784, the year before Circle of Shadows takes place and is now made into a huge advent calendar every year to coincide with their Christmas Market. 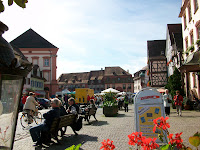 When Ned and I visited we fell for it completely; me with the half-timbering and Ned with the beautiful blonde in traditional dress who brought us our beers. We walked in the woods and peered at the buildings, but it was finding in Gengenbach the Museum of Fools which made it so important to the finished book. The Shrovetide carnivals of misrule are a long standing tradition in this part of Germany and involve parades were inhabitants dress up in elaborate masks and costumes, often mocking their rulers or officials. You can see some of the photographs of the festival in Gengenbach here, including the wonderful and terrifying masks.

I was fascinated by the masks, and standing in front of the town hall imagining that torch-lit pagan procession gave me the start of the book. A young Englishman, Daniel Clode, visiting the area in 1785 and watching the parade suddenly finds himself confused and afraid. For him the people in costumes are replaced with real demons and witches. He goes missing and is found some hours later by his friends in a locked room, his wrists cut and the murdered body of a young woman alongside him. She is a favourite of the ruling Duke and Daniel has no memory of what has happened or how he came to be there. Things looks very black for him indeed… So there between the beer, the walk and the museum of fools I found my novel. And if you’re curious to find out what happens to the young Englishman next, well, I did mention the paperback is due out tomorrow, didn’t I?

Lovely post, Imogen. I've now devoured all your Harriet Westerman novels so I shall be diving into this one with relish. One of my novels, The Floating Book, is partly set in beautiful Speyer. No one had set a novel there before, and they were rather chuffed with the idea, so the town gave me a wonderful guide with whom I am friends to this day.

Good luck tomorrow! I agree - nothing like walking in the shoes of your character for research if you can.

That's MY kind of research: beer, bread, bratwurst, a boyfriend (we won't mention the blonde waitress) and the Black Forest!

Congrats on the publication of your book! Looks lovely...and what fun research is, eh?

I'm looking forward to reading it too. Like Michelle, I'm up to date with the previous three. And love Germany to bits, so will enjoy a book set there.

Thanks all! It was great fun to research and really hope you like the book. Speyer is wonderful, will enjoy reading your take on it Michelle.

devoured the hardback as soon as it appeared - probably with beer, not necessarily bratwurst. loaned it out eagerly. Now NEED the paperback. a little less chewy?

Must read it! Out with the Kindle..Yes, I have found the German Hist.Inst. invaluable for various novels - it helps if you can read German - but as you say, going to the actual place is irreplaceable. Gengenbach sounds a lovely place. I got one of my two beloved childhood Teddys, Growly, in Freudenstadt in the Black Forest. Freudenstadt means 'town of joys' so it was a very appropriate place to be presented with a superb bear, if you are an enthusiast for teddies, as I have been since small childhood.