Manuscripts and The Master and Margarita: by Theresa Breslin


It was one of those never-to-be forgotten experiences.

As a writer who is also a librarian I’m always interested, when in different countries, to visit their libraries. Recently, on the Russian leg of the Edinburgh World Writers’ Conference with Melvin Burgess and Tibor Fischer, I’d asked if it was possible to see around the Russian State Library in Moscow. I expected a quick tour of various departments. Instead what Melvin and I were treated to was a privileged glimpse of the archives and special collections. 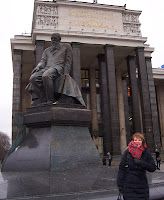 Dwarfed by the massive statue of Dostoyevsky we made our way with our British Council escort to meet the librarian and archivist, our charming hosts for the afternoon. We were led through a maze of corridors, across an open courtyard to a separate building where they’d laid some exhibits out for us.
First up was a stunning bound illuminated manuscript, with colours from natural dyes still vibrant after hundreds of years. 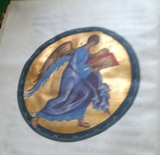 Some manuscript leaves from a writer of later date were next. There were pages of pre-typewriter elegant ink script, with scoring out of text and corrections inserted. Empathy flowed from us. But who could this be? Which famous Russian writer?

Leaning closer we could distinguish the words ‘Brothers Karamazov’ Dostoyevsky’s own writing!

The archivist then picked a green covered exercise book and laid it before us. 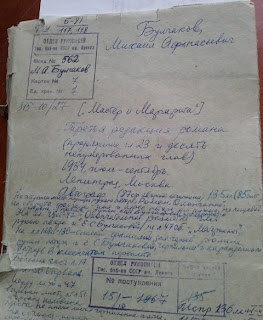 We literally gasped when we realised it was a handwritten version of Mikhail Bulgakov’s novel, ‘The Master and Margarita.’

It was an exceptional day. We left, dizzy with delight.

Our trip took us further east - four hours flight plus four hours time difference - to land in the pale yellow and lilac light of a Siberian winter morning. Beautiful clear air and a mesmerising twinkle from the ground’s frosty sheen. Mild snowfall, but it wasn’t that cold, honestly, (and I’m not just saying that because I’m a Scot) A myriad of things done and seen and shared, and then, on our last night, something happens, one of number of things which I’m starting to call a Siberian Serendipity moment.

We’re invited to a ‘Night at the Museum’ – a very innovative idea here - when the public have free late night access to the Krasnoyarsk Cultural and Historical Museum Complex. Wandering through some amazing exhibits in one of the galleries we come across a painting. Ahh! The artist has chosen to illustrate scenes from a book. I’ll leave you to guess which one…. 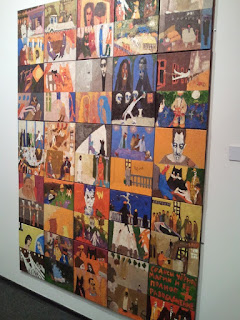 An interactive session on Scottish Folk and Fairy Tales with illustrator Kate Leiper is scheduled for Tuesday 27th November, Rothes Hall, Fife.
In conjunction with the Citizens Theatre and South Lanarkshire schools the Divided City musical will be produced at Hamilton Town House Theatre in February 2013.

Ace post! What a fantastic trip this must have been.

Thanks Adele. It was. Unique opportunity to speak to librarians, teachers, and, most importantly, young Russians. You'll be interested to know that there's a huge demand for YA fiction!

Late to the party, but honestly, I'm just gobsmacked with jealousy. Fantastic post, and wonderful that they let you take photos. Thank you so much for sharing it.

They were so welcoming. Such a masterpiece with reach - spooky thrill...