On Remembrance weekend I was in northern France, where even the railway timetables shriek of poppies and blood.

I was staying at Cambrai, at a nice hotel, the Beatus,  run by a M Philippe Gorcsynski. He has surrounded the hotel, which he inherited from his mother, with maple trees, for the many Canadians who visit. 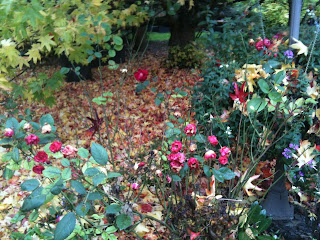 Inside, he has a small room off the foyer dedicated to a tank,
containing tank models, press cuttings and so on. 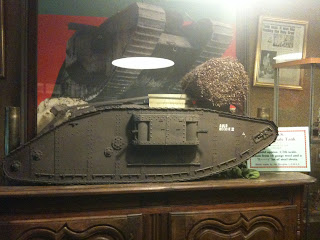 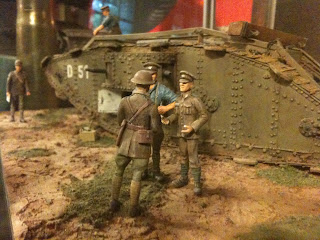 A few miles away, he has a real tank. She is British. Her name is Debora. 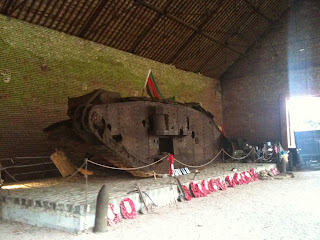 I was humming the Pulp song all weekend.

Tanks often had nicknames. There was one called Peak Freans, after the tinned pie company. Which is a bit bloody bleak.

M Gorczinski is a local man, and thus grew up immersed - literally, when it rained - in the detritus of the Great War. His town - small, pleasant, with two Moorish giants (Martin and Martine) on the clocktower - had its own famous battle, in October 1918. It is mostly famous for the use of tanks, a new thing. Here are the grandfathers and uncles of the Canadian visitors. 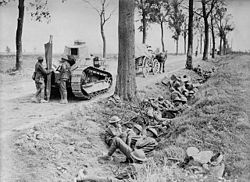 The tanks were developments of the same technology that Captain Scott had tested in the Antarctic seven years before, in the form of motorised sledges. 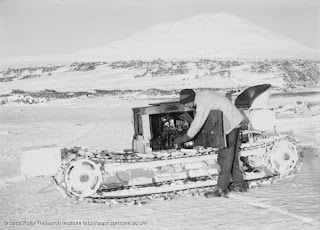 M Gorczinski knew that a British tank had been shot up and captured at a nearby village, Flesquieres. An old lady told him she had seen it being buried when she was small - this wasn't unusual, tanks made good extra strength for trenches. M Gorczinski looked for the tank for years. He located the spot. He used aerial photography and metal detectors and infra-red. He dug. And dug. And found it. And dug it out. And got a crane. And hauled it up. And cleaned it out, 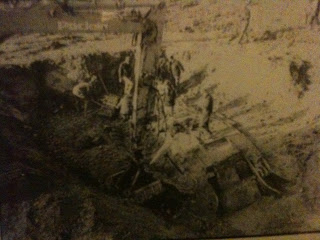 and put it in a barn. 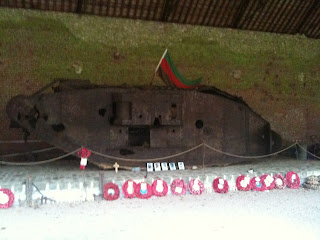 I was in France to take part in a talk at the Musee de la Grande Guerre at Meaux, about facial reconstructive surgery during WW1, which as some of you know is my thing. The French facially wounded soldiers called themselves the Geules Cassees - the Broken Mugs, if you like. They have their own fondation and are well respected as a distinct group to this day, with modern sufferers of similar damage taking the place of the WW1 poilus. Debora is known as a geule cassee. You will see why from the pictures above (from the left, amidships) and below (right, front on). 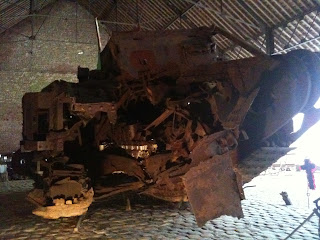 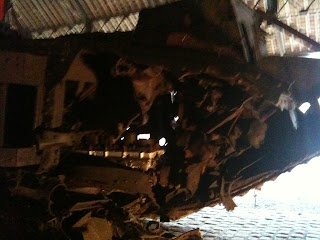 It is unbelievably cramped inside. You can't imagine that five men and an engine could fit in there.

This is the kind of anti-tank gun that destroyed her. It is next to her in the barn. 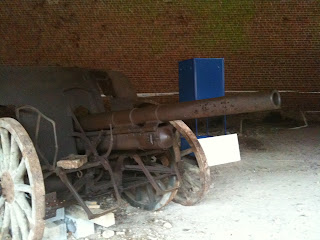 The walls of the barn are streaked with bullet holes - quite possibly made by Debora as she came through the village, a giant Dalek, on her way to her fate. 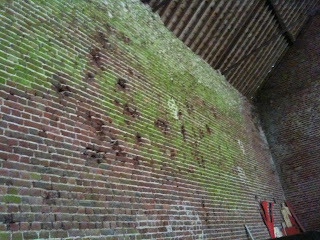 (I shouldn't call her a Dalek. Daleks look much more like German tanks. Their designer, Ray Cusick, served in the army in Palestine. I thought about looking into whether there was a connection, but there is rather more information on Dalek design on the web than I dare approach.)

Debora's entire crew died. Their portraits are propped up, above the wreaths. 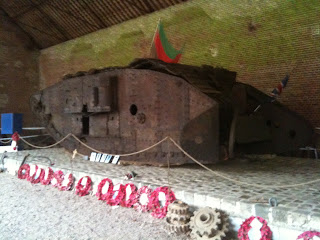 Here are M Gorczinski, my publisher Cynthia Leibow, and I, feeling respectful and sober. 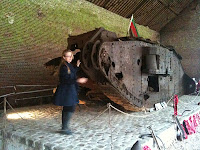 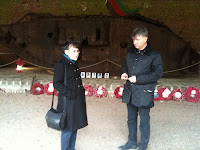 Here is an emblematic hat 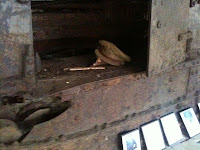 And here is an old WW2 photo of Martin and Martine, standing in front of a tank called Black Prince. The Nazis had taken them down from the bell tower and sent them by train to Belgium to be melted down. Someone took them off and sent them back. 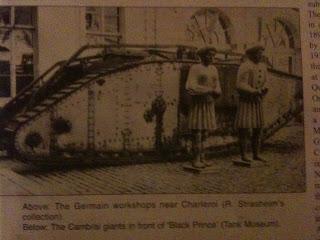 Their legend is that in mediaeval times a Moorish couple lived at Cambrai, and when the town was under attack they came out with hammers and chased away the enemy.
Now they get to strike the clock.

Here is their clock tower. You can't really make them out (they are not the odalisques lounging on the pediment). It was, as so often, a rainy day in Flanders. 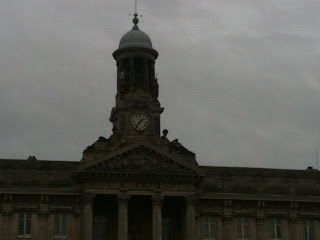 M Gorczinski is trying to raise funds for a smart new museum for Debora, half a mile away near the spotless War Cemetery, where Debora was destroyed. The building still stands behind which the guns were concealed; the road leads peacefully through where the ambush happened. The dead are buried in that cemetery. While I respect this plan, and dare say it will come about, I like where she is now. I like that she is in an open-sided barn, with rain and rust and dandelions and her own bullet scars on the old bricks, and some boxes of dusty helmets and bottles and old shellcases, and M Gorczinski's remarkable story. I like museums to be old too, and to look it.
Posted by Zizou Alphonse Corder, PhD at 00:05

Thank you, Louisa, that is fascinating. I have to say I agree there is something particularly evocative about the old tank's present home.

Thank you, Louisa. My father was shot in action, (but survived!) at Aubigny au bac on October 13th 1918, just north of Calais, so your words and pictures were very relevant.

Thank you, Louisa. My father was shot in action, (but survived!) at Aubigny au bac on October 13th 1918, just north of Calais, so your words and pictures were very relevant.

You're right - sometimes museums can be too clean and clinical and it takes samething away from what you're looking at. The Tunnel experience in Sarajevo is very similar - it's a museum at the end of a long bare road, still in the house that the Tunnel was first started in during the siege, complete with family-collected mementos, news clippings, and personal testimonies. It meant so much more, like Deborah, to see it all where it actually happened, with carefully collected historical links on display nearby, than if it was all displayed neatly behind glass somewhere with perfectly printed notes.

I'll have to look up about the Moor statues - that sounds so curious it has to be explored!