A note from Adèle Geras:

This month I'm handing over my slot on this blog to my daughter, the novelist and poet Sophie Hannah.  To introduce her, I'm quoting the back flap copy on her new novel which stars Hercule Poirot: THE MONOGRAM MURDERS 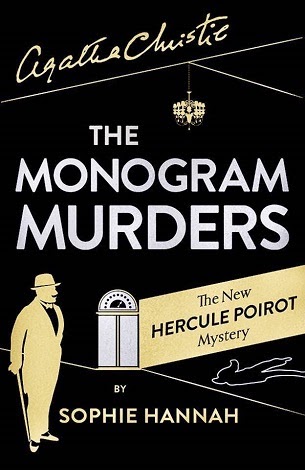 "Sophie Hannah is the internationally bestselling author of nine psychological thrillers which have been published in more than 20 countries and adapted for television. Her novel, THE CARRIER won the 2013 Specsavers Crime Thriller of the Year. Sophie is an Honorary Fellow of Lucy Cavendish College, Cambridge, and as a poet has been shortlisted for the TS Eliot Prize."

A question I've been asked at least a hundred times since it was announced that I was to write a new Hercule Poirot novel is: 'Wasn't it daunting?  Weren't you scared by the prospect of having to fill Agatha Christie's shoes/write in her voice/wear two-piece tweed suits and move to Torquay?'  More than a hundred times I explained that I wasn't going to attempt to copy Agatha's voice, that no one could 'become' Agatha Christie who was not Agatha Christie from the start; that there was no moving-to-Torquay requirement attached to the project, that the wearing of tweed suits was not compulsory (though actually I'd rather like one, come to think of it.  I could do with some additional gravitas.)

Daunting, though?  Scary?  Yes, for sure.  Agatha Christie is the best and most successful crime writer of all time, and Poirot is the greatest fictional detective that ever lived in the world's imagination.  I didn't mind being scared - I decided it was character-building, and, besides, a healthy dose of fear of catastrophic failure does wonders for any work-in-progress.  I suffered not only from Agatha's-a-hard-act-to-follow fear but also from Historicalnovelophobia: terror of historical novels.  I'd never written one before.  My knowledge of History (by which I mean anything that happened before The Good Wife Season 1) is scanty.

You might think, therefore, that I would be paralysed by fear.  I wasn't.  There was one certain fact that I clung to for reassurance: Golden Age mysteries are easier to write than contemporary mysteries because you don't have to be ashamed of storytelling.  I've read enough of both to be struck by the difference.  Of course, writers of modern crime novels love story too, but we can't begin our books, as 1920s mystery authors so often did, with a first person narrator saying: 'Let me tell you about the baffling murder case I encountered last summer, during a brief stay in Downham Market, Norfolk.  It all began when...'  Etcetera.  These days, such an opening would seem too unsophisticated, too top-down, too 'Sit down children and let me tell you a gripping tale'.  Contemporary crime writers go to great lengths to create the illusion that their novels are not stories they are telling - or even stories their protagonists are telling - but rather real people's actual lives that the reader happens to be observing, without any inventive authority patronising them by telling them anything.

Perhaps strangely, I wasn't aware of this difference until I started to think about how I would approach the writing of my Poirot novel.  I didn't realise that part of the 'Aargh, this is hard!' feeling I had whenever I wrote one of my Simon Waterhouse/Charlie Zailer novels was the frustration of having what I thought was a dramatic, surprising and exciting story to tell and being unable to approach it in what you might call a straightforwardly storytelling way.  Edward Catchpool, the Scotland Yard policeman narrator of The Monogram Murders, tells the story in his own personal chronological order - what happened to him first in connection with this mystery, then what happened to him next, then the next interview/clue, and so on.  He starts chapters with announcements like, 'The next day, I set off to X to interview Y.'  Simon Waterhouse, my twenty-first century police detective, would be laughed out of every branch of Waterstones if he attempted similarly straightforward narration.  He can't tell readers that he has the most puzzling case of his career to solve but that, not to worry, he's a brilliant genius so he'll solve it with panache and aplomb.  Poor old Simon has to hope that readers infer this by eavesdropping on his thoughts and conversations.

Contemporary readers won't be told in the way that Golden Age readers liked to be.  If a detective in a modern crime novel has an intriguing, exciting case to solve and an array of cryptic clues to help him do so, he mustn't appear to be too excited by the challenge; it's not merely authors but also fictional characters who can't seem too enthusiastic about a great mystery story.  These days, our detective heroes have to be depressed and defeated by the puzzles laid before them, bleakly certain they'll fail and ruin their entire careers, until the moment just before the end of the book when they work out the truth and deliver a solved mystery.  Even their moments of triumph should ideally be muffled, though.  They mustn't yell, 'Tee hee, I've got it!' like boastful Golden Age detectives.  Instead, we expect them to produce their revelations casually and/or covertly, with minimal fanfare and grand guignol, and certainly no long explanations revealing precisely how clever they've been.  'So, yeah, once that piece of evidence came in, the obvious conclusion to draw - the one anyone would have drawn because there's nothing special about me - was that X did it.  It's no big deal, really. LOOK OVER THERE AT THAT SOCIO-ECONOMIC CONDITION! DON'T NOTICE THAT I'M A HUGE BRAINBOX GENIUS SOLVING A BAFFLING MYSTERY THAT NO ONE ELSE COULD SOLVE!'

I knew before I started writing The Monogram Murders (which is set in 1929) that Golden Age fiction's lack of shame about storytelling would make my Poirot-writing process so much easier.  If what you're trying to do is tell a compelling story, it helps if you don't have to pretend not to be trying to do that.  Plus I had a plot idea that was hugely high concept and grand-guignol-ish - rather like the solutions in Murder on the Orient Express and And Then There Were None.  I knew my idea was perfect for a Golden Age detective novel - for a book set in an era when readers valued startlingly unpredictable storytelling and gasp-inducing twists more highly than their own right to say carpingly, 'Yes, but would that actually happen?  I mean, it's never happened in Basingstoke where I live.'

In an age (the present one, that is) that chronically undervalues plot, mistakenly believing that depth of character and insight into the human condition are somehow more compatible with stories that happen every day in Basingstoke rather than with unusual you've-never-heard-this-before-and-you-never-will-again stories, it was an utter joy to be able to write the Golden Age way.  I'm pretty sure I will try to find a way to do so again, even though my (updated - this post has taken a whole morning to write) definition of History is now anything that happened before The Good Wife Season 4.

I think my love of Golden Age fiction is why I prefer cosies to psychological thrillers. I don't mind police procedurals as long as they're like Reginald Hill ones in which the characters matter. There are a lot of people like me around, Sophie, never fear, who will enjoy the novel you've written. You're not Agatha Christie and can't be, but that doesn't mean another Poirot novel won't be welcome. You wouldn't have been chosen for this job if the publishers ain't felt you could handle it.

Really enjoyed this. Very interesting on the difference between contemporary and Golden Age detective novels - and really looking forward to this high-concept story!

Thanks so much, Sophie, for visiting us here on the History Girls. It was fascinating to hear how there really was a historical angle to your new Poirot, apart from its being set in 1929. You are quite right about the difference between Golden Age detective fiction and the contemporary lot. Though I found two Agatha Raisin mysteries in our holiday accommodation and think she is tapping into that idea too. Those books could be set any time between about 1930 and 1960, I think.

Anyway, I wish the Monogram Murders every success and can't wait to read it and discover the High Concept twist.

Mary, Agatha Raisin is great fun, but definitely later than the 1930s to 60s. The books have personal computers and mobile phones in them. Still, they have an old fashioned flavour to them.

Oh Sue, I know when they were written! But the content makes them seem much older.

Enjoyed your post very much, and it sounds as though your little Belgian will give the original a run for his francs. But do take up any offer of Christie's 'Torquay' home. It's on the lovely River Dart, not in Basil Fawlty-ville.

Thanks for giving us a glimpse into your creative processes, Sophie! I love a good plot and an original idea, too. I can't wait to read the Monogram Murders!

Rowena...just hopping in here to say that Sophie LOVES
The house! She's stayed there twice. The last time I went too and wrote a post about it here on History Girks. Just put Agatha Christie into the search box! It's the most beautiful place!

I must confess to adoring golden age crime stories, and having far more than any child of the sixties should! I am looking forward to your story and have had it on pre order for months! Thank you, you can never have enough golden age stories! :-)

What a fascinating post. Thank you Sophie! Must say I hadn't ever truly thought about what makes golden age so different to present writing so it was wonderful to have it explained by someone who has been in the shoes of Agatha herself... she would have thought me very stupid. I once stayed at the old Cataract Hotel on the Nile in Aswan and sipping drinks on the verandah, staring out over the water and the feluccas and the desert, took on a whole slowed down pace. Sitting there made her novels very real for me.