Who do you think you are? – a fantasy farewell from Katherine Roberts 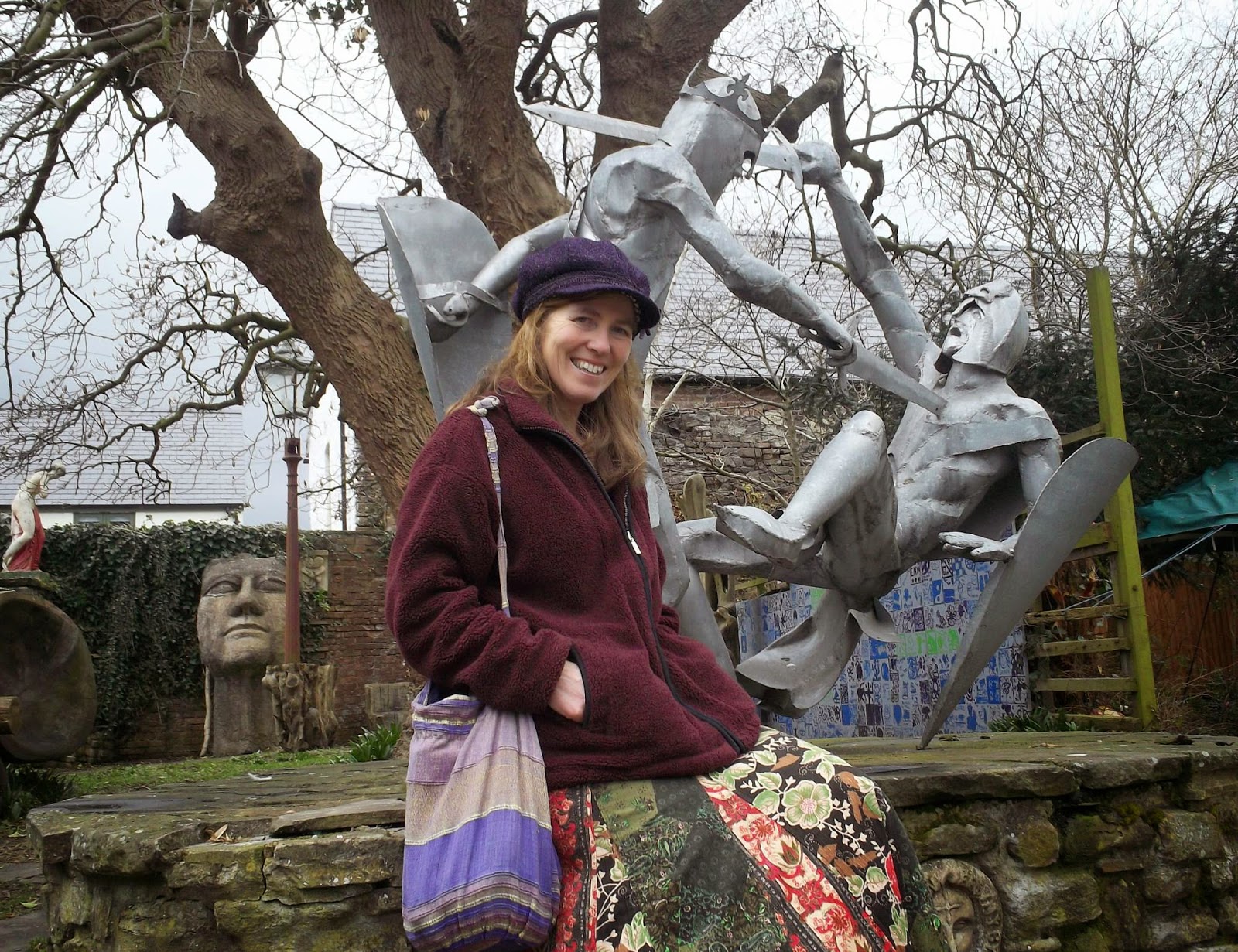 I have to admit the idea of tracing my family roots never really excited me, until my dad casually dropped into the family Sunday lunch conversation one day (as you do) that he’s listed as one of the heirs to 77 acres of prime Manhattan real estate, worth approximately 800 billion dollars, and including sites such as Wall Street, Ground Zero (previously the World Trade Center), the Trinity Church, the Woolworths Building, New York University, and Washington Square Park. For those of you who don’t have any Welsh blood and therefore probably have no idea what I'm talking about, I’m referring to the Edwards Millions, now an urban legend and notorious for attracting bounty-hunters keen to get their legal fingers on a piece of this increasingly valuable pie. There are apparently around 5,000 potentially legitimate heirs alive today so the fortune would have to be shared, but that’s still several million dollars each if someone ever manages to make a legitimate claim... and it's a big IF.

Back in the 18th century, a young Welsh pirate named Robert Edwards sailed the high seas, sinking Spanish galleons. Since England was embroiled in the War of the Spanish Succession at the time, Queen Anne rewarded him with 77 acres of land on Manhattan Island, New York… then mostly farmland. Robert later became a captain in the Royal Navy and continued to serve his country in a more respectable fashion.

In 1778, Robert Edwards leased this Manhattan land to brothers John and George Kruger, wardens of the Trinity Church (which had been built on it), for a period of 99 years with the provision that, when the lease expired, the land and its rents should be divided among his lawful heirs. Immediately after signing the lease, however, Robert boarded a ship to England which went down with all passengers and crew and was lost in a storm. His bones and papers relating to the lease lie somewhere at the bottom of the Atlantic, and were never recovered.

Fast forward 99 years to 1877, when the lease to the Kruger brothers expired. Robert Edwards was unmarried at the time of his death, so the land should have passed to the descendants of his six brothers and his sister back in Wales… i.e. the children of William, Jacob, Leonard, Joshua, John, Thomas, and Martha Edwards. However, the Trinity Church (having had use of the land and its rents for almost 100 years, during which time its value had soared) proved reluctant to give it up. The Welsh family's attempt to claim their inheritance at the time was half-hearted at best, and the Trinity Church performed a land grab, claiming that the 77 acres were part of land gifted to the church by Queen Anne of England in 1705… although no deed has ever been produced to prove this.

Since the expiry of the lease in 1877, there have been many attempts by groups of Edwards heirs scattered across the world to reclaim their inheritance – some possibly legitimate, others false claims filed by lawyers eager to get their hands on a piece of the increasingly valuable pie. All these claims have been successfully fought off by the Church, and were also hampered by the New York Statute of Limitations which I understand states that any such claim must be made within 15 years of expiry of a lease (1892 in this case). Since the original heirs would presumably have filed their claim for the land within this 15-year period, the main problem seems to lie with the patchy records kept back in the 18th century and the many different spellings of Edwards/Edwardes, further complicated by the Welsh tradition of using a father’s Christian name as a surname, which gives rise to completely unrelated Edwardses.

To confuse things even further, Robert Edwards seems to have multiple identities. Naval records do prove the identity of Robert Edwards as a captain of that period, but not – understandably – in his original career as a pirate. American legend tells how our dashing hero Robert saved a Native American princess from death and was rewarded with the land by her father the chief… a more politically correct version, I guess, since it’s highly questionable that the Queen of England should own 77 acres of Manhattan in the first place, no matter who she gave it to!

So where does all this leave me?

I believe the Edwards line follows from my Welsh grandmother, Evelyn Edwards, who came from the Valleys, married Henry Cudmore, and after the war lived out her life as a humble shop assistant in Devon. Here is Gran as I like to remember her, surrounded by her beloved budgies:

Her only child, Derek Cudmore, is my father. This picture was taken about 30 years ago, and I think you can see a bit of Welsh pirate blood in there somewhere! (That’s my mum beside him, who has a bit of Spanish ancestry, so the connection is obviously in their genes.)

Almost a hundred years of sketchy history and hard-to-trace documentation lies between Gran Edwards and a possible multi-million-dollar fortune. Even if Gran turns out to be a direct descendent of one of the Edwards siblings who apparently inherited the land, I doubt this mystery will be resolved in my lifetime. But that still leaves what I think is a fascinating story.

Robert Edwards’ tragic loss at sea with all his legal papers immediately after he signed the lease to the church is highly coincidental, if not downright suspicious. There was supposed to be a Trust Fund, set up for his heirs, in the Chase Manhattan Bank – which denies all knowledge of this. The resulting century-old struggle to reclaim the money for the Welsh heirs from the powerful (and now extremely wealthy) Trinity Church, with its potential for a rags-to-riches happy ending, would make a great historical novel for an author with romantic fantasy twist… hmm, maybe I should write it one day?

Katherine Roberts has some Welsh and Spanish blood, is (possibly) heiress to a multi-million dollar slice of Manhattan Island in New York, and writes fantasy and historical fiction for young readers. Her latest series is the Pendragon Legacy about King Arthur’s daughter, published by Templar Books in the UK.

She is retiring from the History Girls blog to take up a Royal Literary Fund Fellowship, while she works on making her first million the hard way.

You can keep in touch with Katherine and find out more about her books at:
www.katherineroberts.co.uk
www.facebook.com/katherinerobertsbooks
www.twitter.com/AuthorKatherine

Posted by Katherine Roberts at 02:00

A taxi driver in London once told me that I was to be his very last ride. He had received an email saying that he owned a slice of Manhattan and he had decided to was throw in his lot and go and reclaim his fortune. I felt very concerned for him as I got out of the cab. He seemed so certain that he would return a multimillionaire. His name wasn't Edwards and he wasn't Welsh or not that I remember. Do you think there are other such stories circulating like this with other surnames, Katherine? (Drinkwater, perhaps???) Or maybe you think I am just damp rag washing away dreams? I wish you good fortune with the books and your claim! x

Wow, how exciting! So is he the original Dread Pirate Robert(s)?
And why aren't you out there learning how to scuba dive and hiring a suitable boat? :-)

I think your dad definitely looks like a pirate! Good luck with the fellowship, Katherine...

I've enjoyed your HG posts, Katherine. All good wishes for your new RLF time and - if it happens - those millions.

Thank you, I've enjoyed blogging here with everyone and wish all the HGs well in the future - I'll still be lurking!

Carol, I think the Edwards-Hall Millions are quite (in)famous, and there are still class actions ongoing in the US... but these kind of stories obviously attract sharks, and there have been several on this one in the past. Don't worry, I'm not about to hand anyone my bank details in exchange for the promise of millions to come :-)

Goodbye from the History Girls, Katherine, and thanks for being one of us. We will continue to meet in other contexts and good luck with the RLF Fellowship and your own writing.

I have the same story in my family. Funnily enough I've written my own blog about this.

Hi our family have been called from BBC
UK TV program that all Edwards must present their Family tree we have William Edwards which is the same name in Robert Edwards family Tree all other Edwards have been discarded except our branch .if anyone have any information pleas PM me .