Sometimes, as a vegetarian, it's distressing to wander around Venice.
There’s a great deal of carnivorous behaviour going on. I write not only of the tourists devouring fegato alla Veneziana alfresco at Venetian restaurants, nor of the rats gnawing cutlets behind those same establishments, or of the seagulls wrenching squid from the canals, nor yet of the egrets fishing for tiny slivers of silver, which fight for life all the way down the birds’ long, creamy gullets. 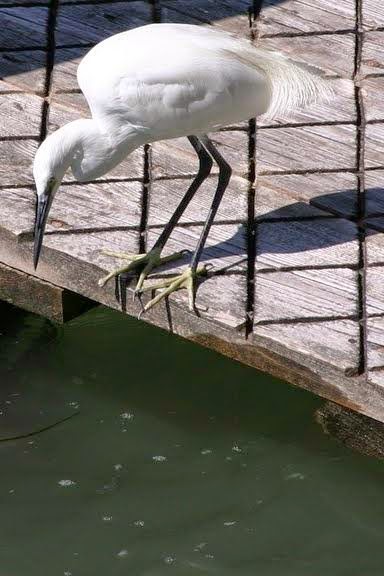 In fact, the most fearsome eating you see in Venice goes on in Byzantine stone circles: reliefs, between 20 and 80cm, which can be seen on the walls of many secular buildings. This is one of the most vivid. 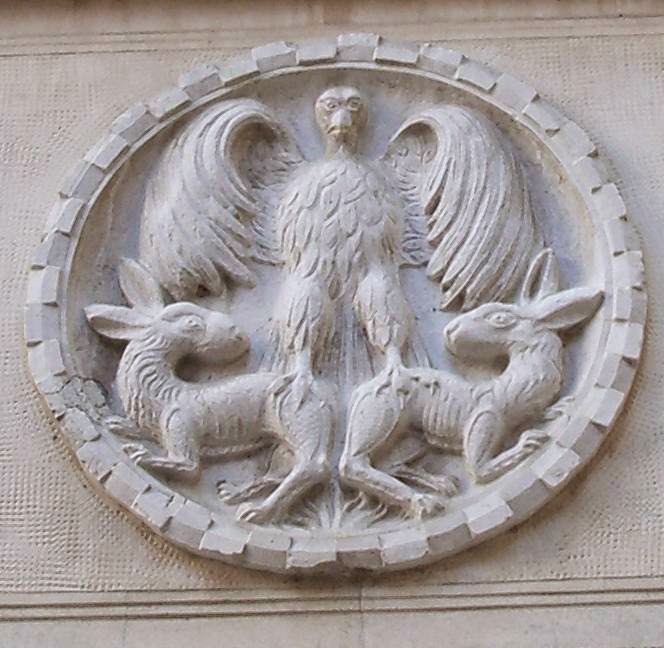 These poor hares can be seen the Campo del Luganeger, which, incidentally, means the Square of the Sausage-Maker. Hare sausage? I don’t know.  I hope not.


Such stone circles are called' patere' (singular: 'patera'). Their shape and size indicates their material origin: they were often cut from slices of old marble columns, with the stone originating from Venice’s conquests in Greece. Most patere were made between the 11th and 14th centuries.


They are sometimes described as charms to ward off evil, which may explain the fact that they are usually attached to the outside walls of domestic dwelling. In most of the patere, the enemy is being despatched by mouth. 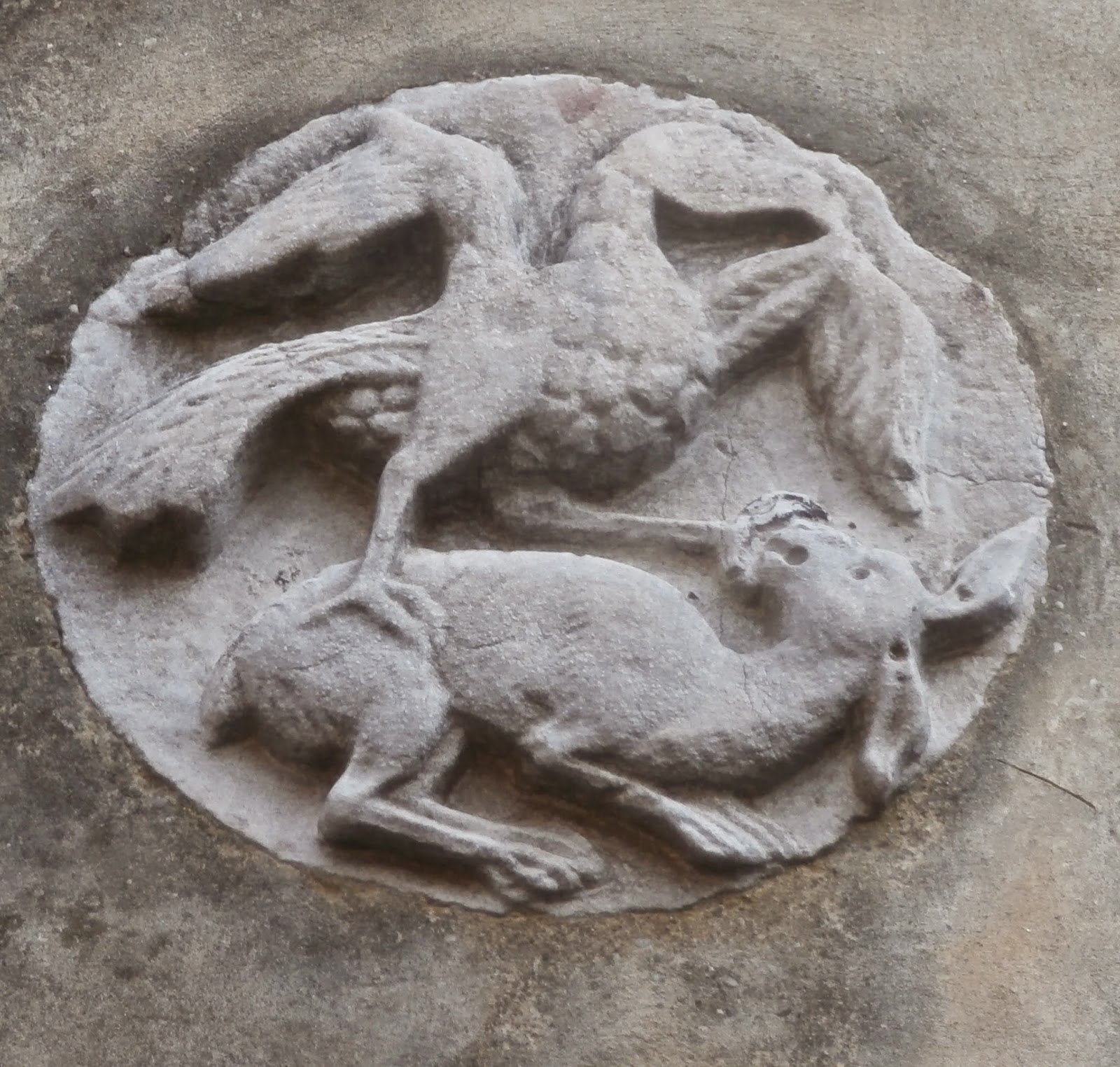 Given their antiquity and their style, scholars have suggested that the patere might originate in those parts of Italy governed by Byzantium or in Byzantium proper, manufactured for export. They have been cited as the spoils of conquest. However, such motifs and shapes are not frequently found in secular Byzantine architecture. So the patere seem to have been a special feature of Venice’s promiscuous accommodation of her varied cultural maternity.


However, the visual tropes of the patere borrow from Byzantium: the poses and body forms of the beasts and flowers, and even the ways in which fur and feather are depicted.
Variations of the same images can be seen in many patere. The most popular vignette shows an eagle eating a rabbit or a hare, symbolizing the victory of virtue over vice. Apparently these rodents represent concupiscence and lust. (Their expressions, however, tend to connote wide-eyed shock at the prospect of being eaten alive.)

There are also lions eating dogs or wolves or horses. 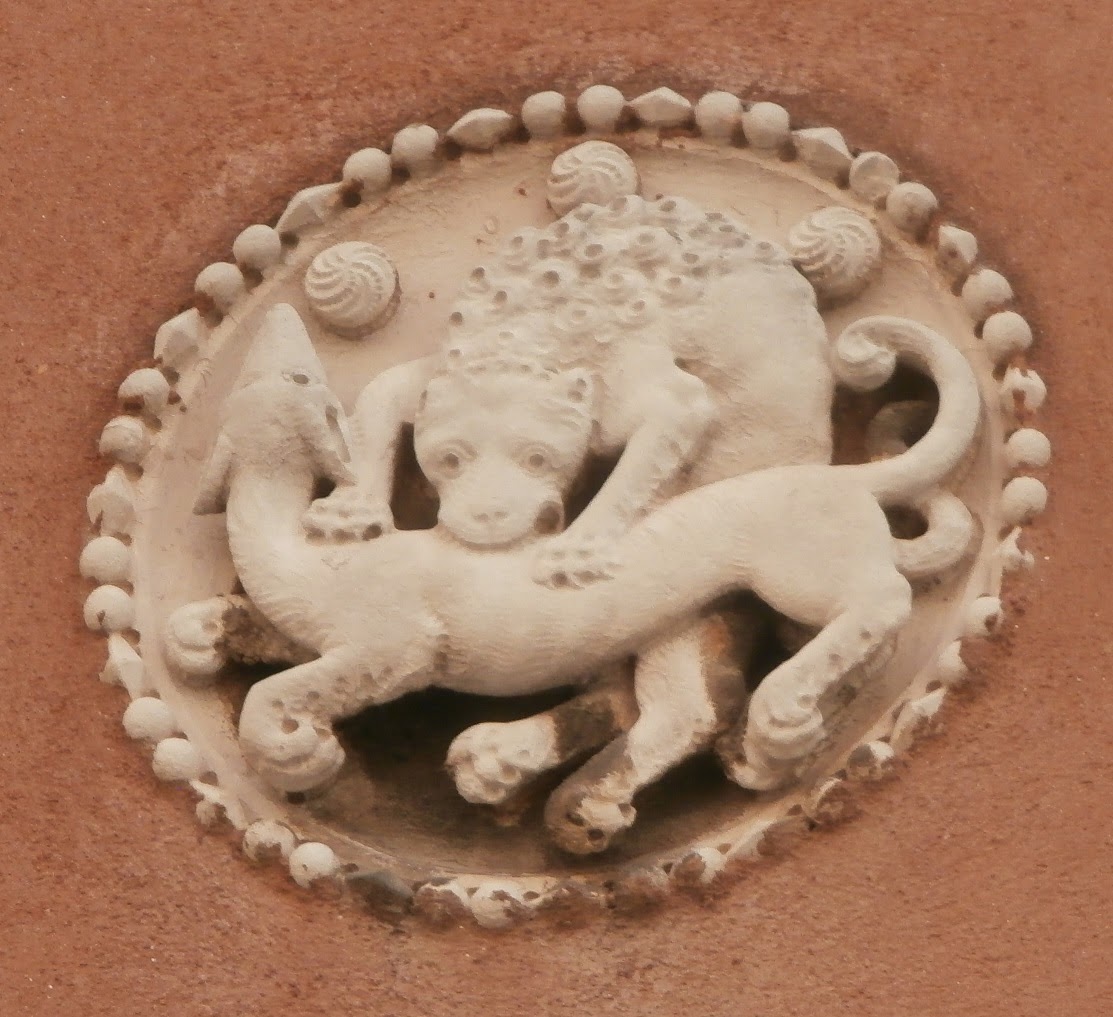 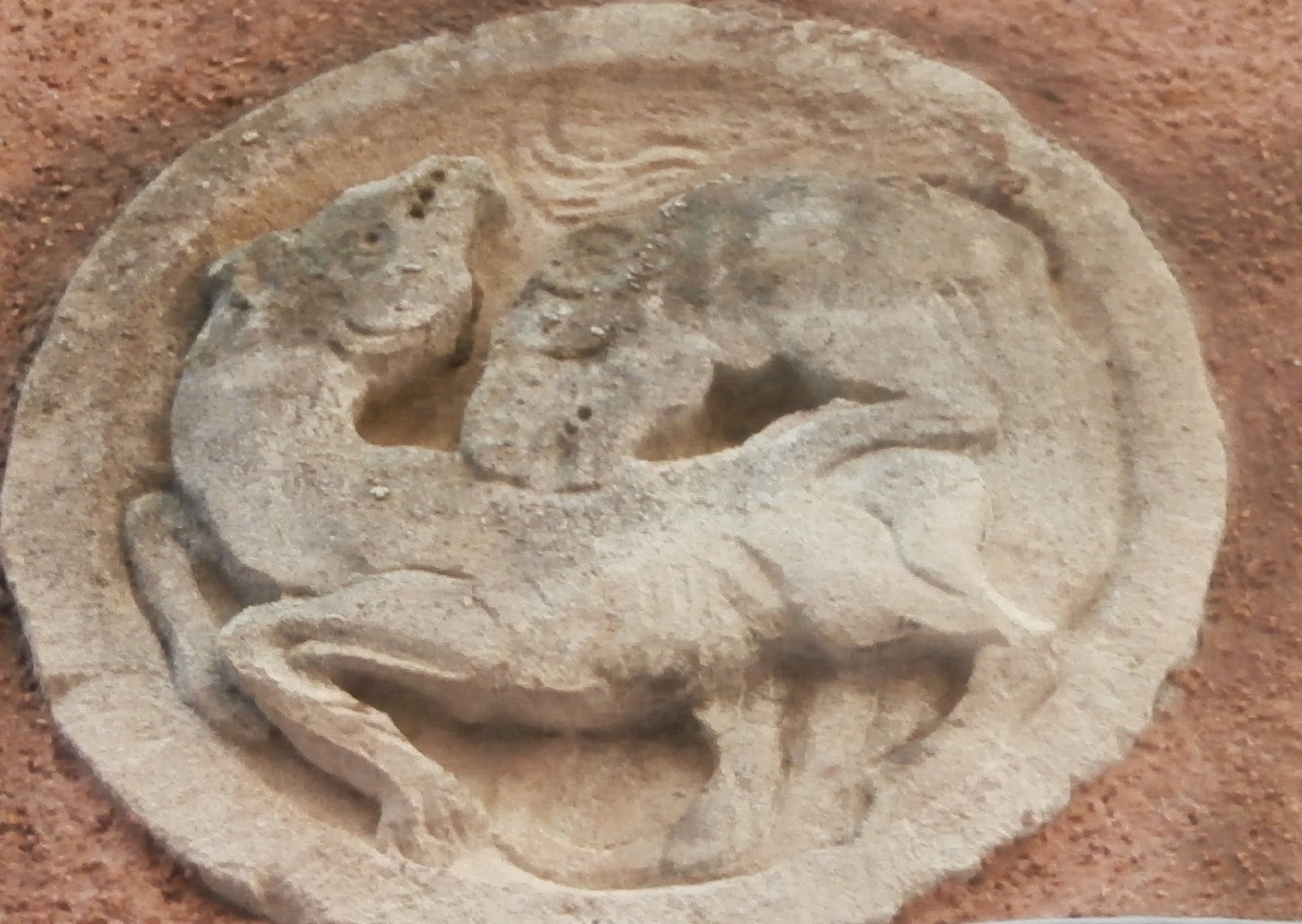 A recent university project made a census of 482 patere, with 150 different themes. They are found in every sestiere of the city. In fact, one third of the world’s population of patere can be found in Venice.
When rectangular with an arched top, these stones are known as 'formelle'. The formelle show many of the same themes as the patere. They are far less numerous than the patere.


The earliest examples that can be dated are to be found on the extreme left arch of the façade of the Basilica – the arch of Sant’Alipio, where there are two formelle from the late 12th century. 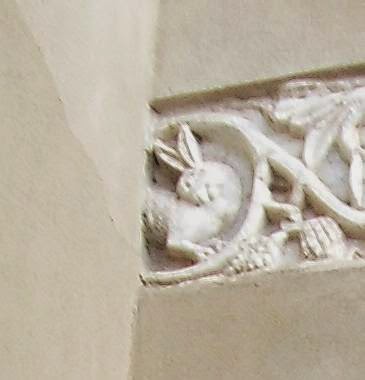 Many patere and formelle are not in their original locations. This is because Venice’s vernacular architecture frequently succumbed to various waves of fashion: Byzantine, Gothic, and Renaissance.  Buildings were torn down, or re-facaded regularly. The patere were saved and added to the new walls, as were other pieces of public art. Or new walls were built around them, as this interrupted rabbit shows, on side of the church of San Giacomo dell'Orio.

Other buildings were razed to the ground punitively, such as the palazzo of Baiamonte Tiepolo at Sant’Agostin after his conspiracy to murder Doge Pietro Gradenigo in 1310. The patere from Baiamonte’s home ended up on the walls of the Tagliapietra chapel in San Vio. Here are some details ... 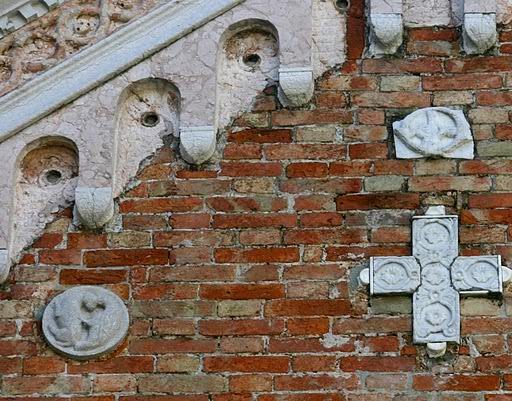 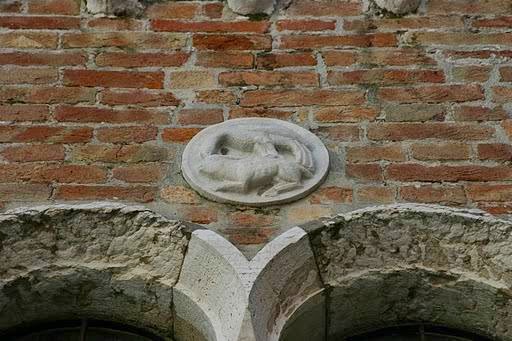 This is no doubt connected to the fact that the conspiracy was defeated on the day of San Vio, where a ceremony to celebrate its failure was held for centuries afterwards. Meanwhile a different kind of stone memorial - a column of infamy - was erected for Baiamonte himself on the site of his former home. (I've spent quite a few years of my life devoted to that column.)
There are less bloodthirsty patere. Some show two birds or other animals eating from the tree or drinking from the well of life. Sometimes two birds are shown with their necks intertwined, to express harmonious coexistence. 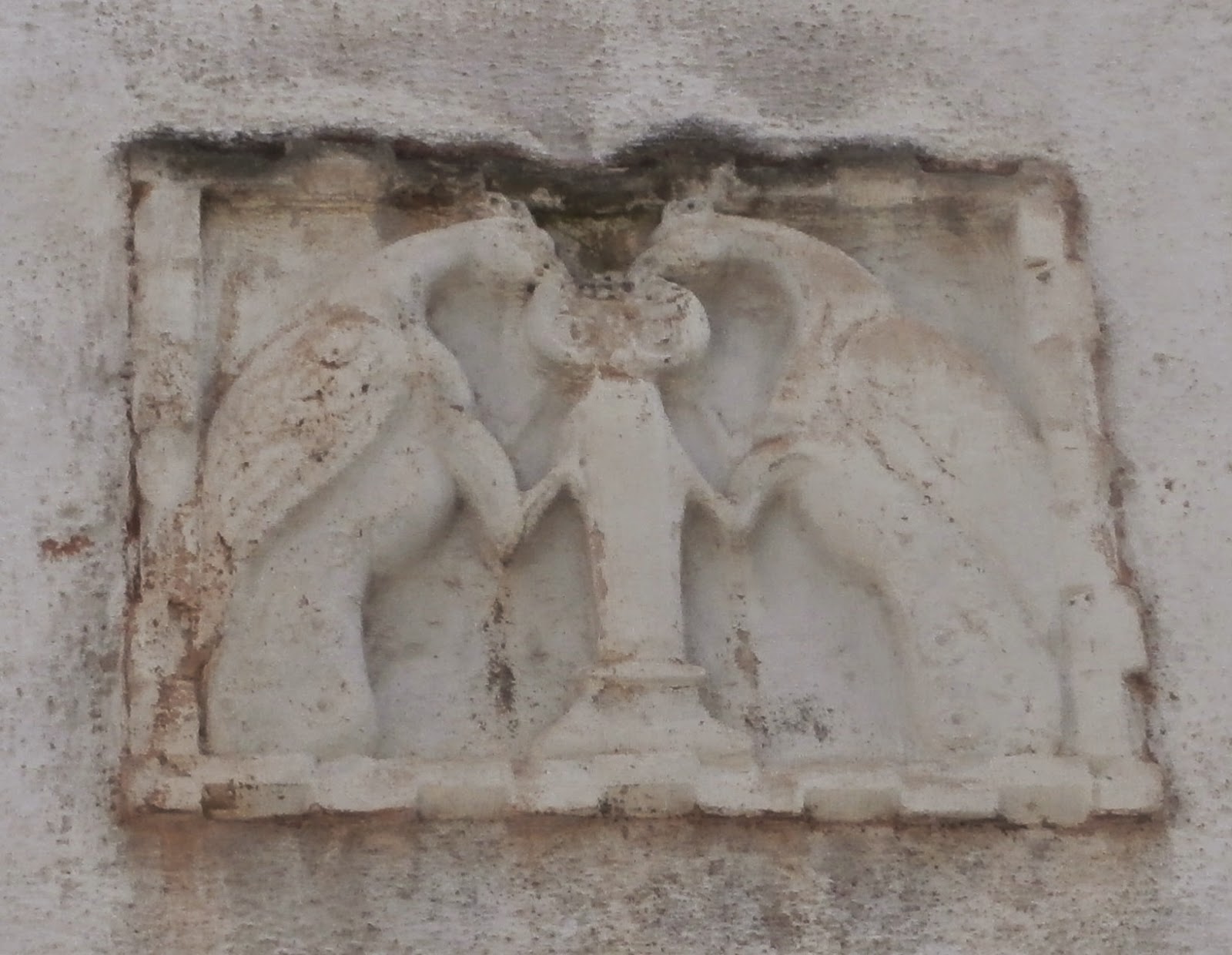 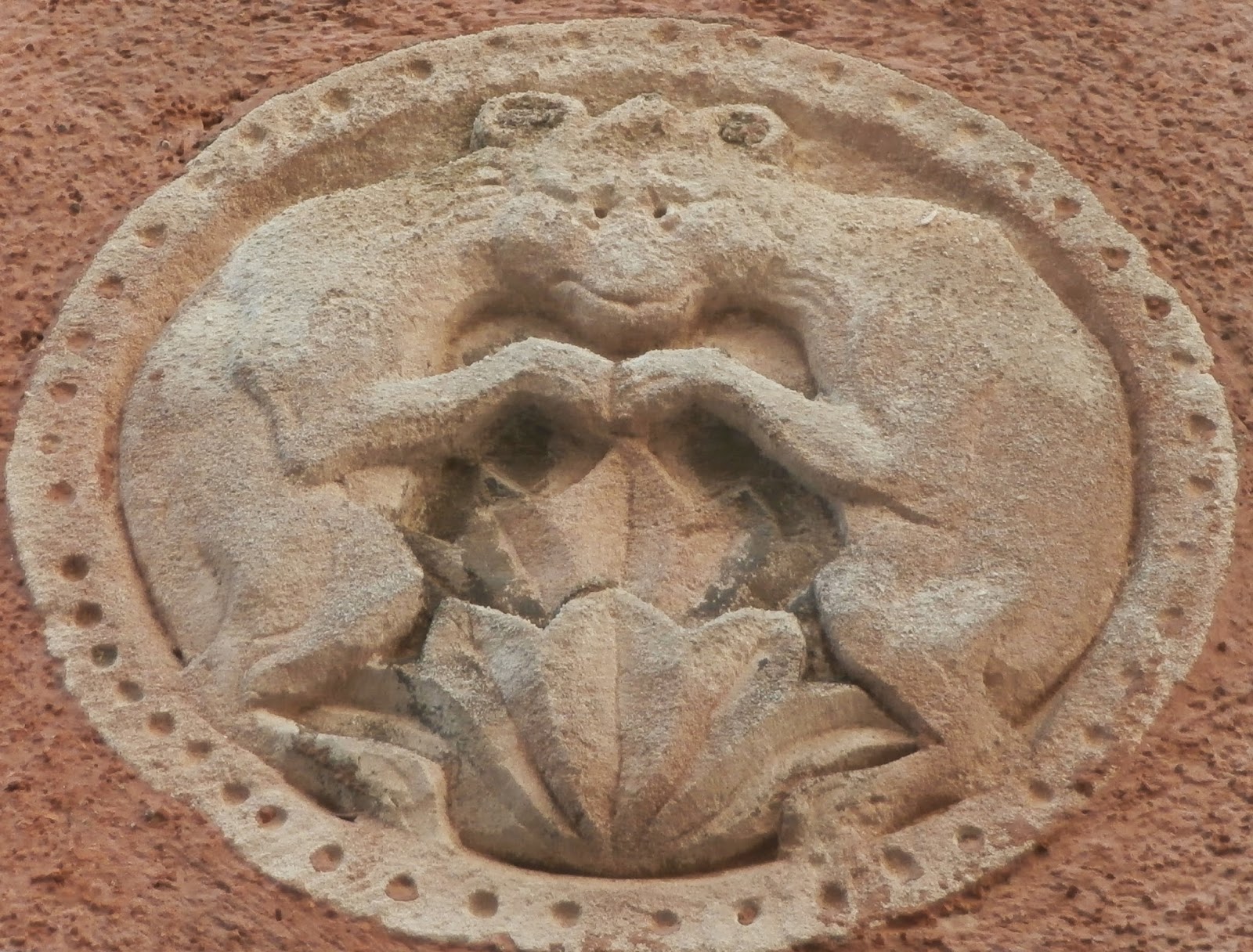 If you happen to be in Venice, and would like to look at some patere, there are good conglomerations of them at Ca' Donà de la Madoneta, the Ca' Cappello in Castello, and the Ca' Vitturi in the Campo Santa Maria Formosa, at San Aponal, and near the Ponte de le Oche. Opposite the famous wine bar at San Trovaso there’s a yellow wall well studded with them too.


Carnivorous behaviour is not restricted to the patere. On this column of the Doges Palace you see each animal with its prey in its mouth. My favourite is probably the bear with the honeycomb. 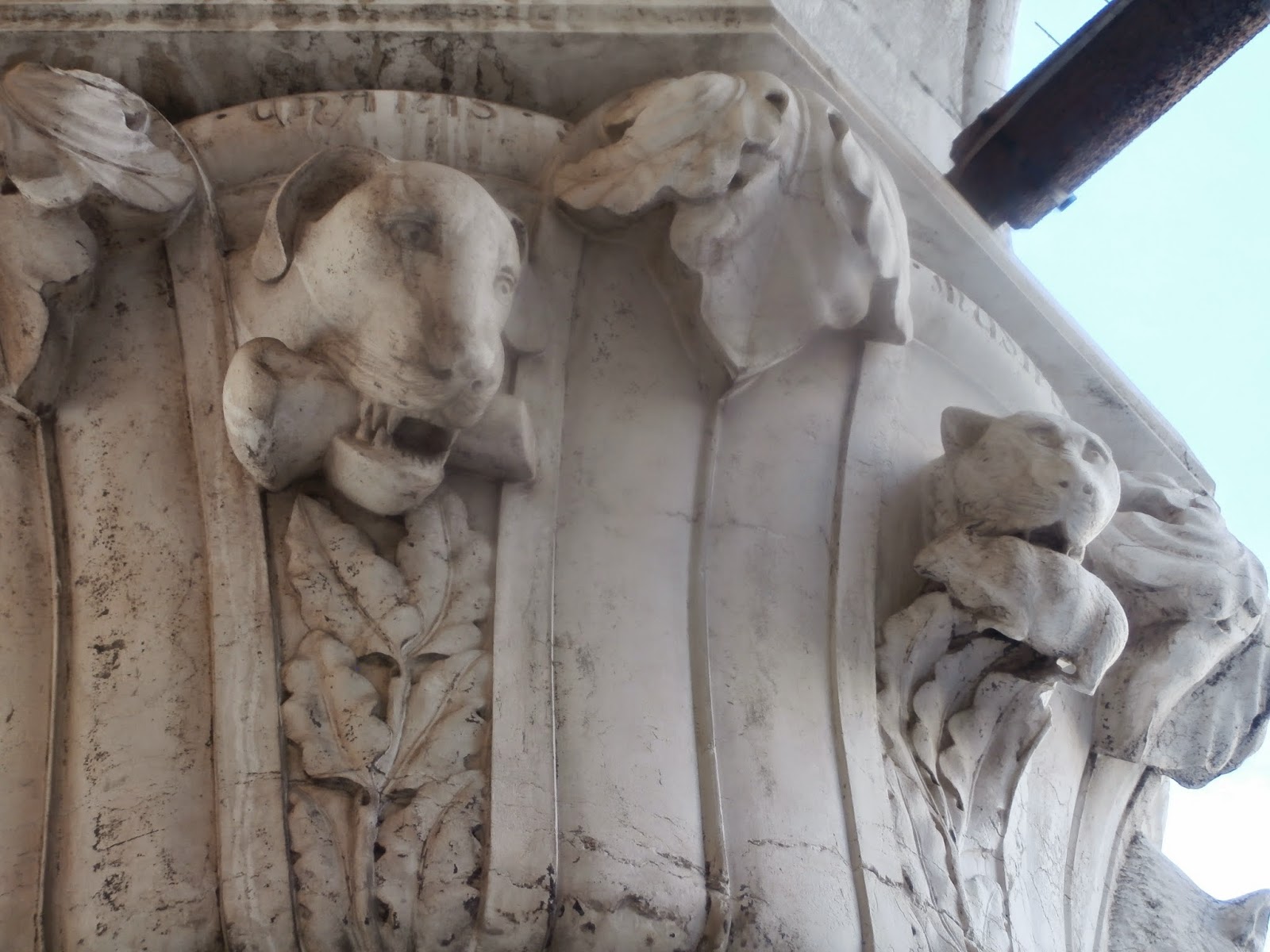 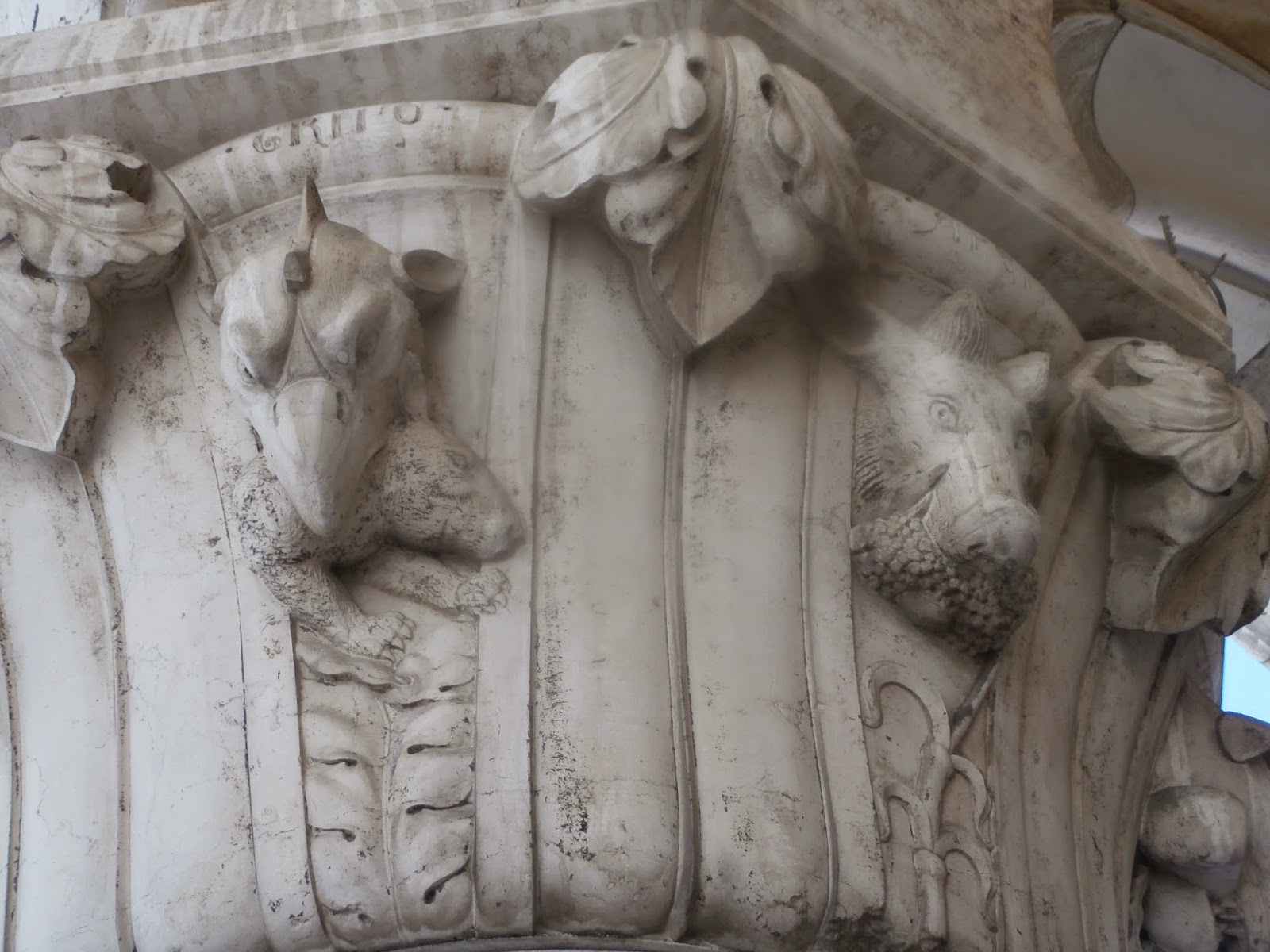 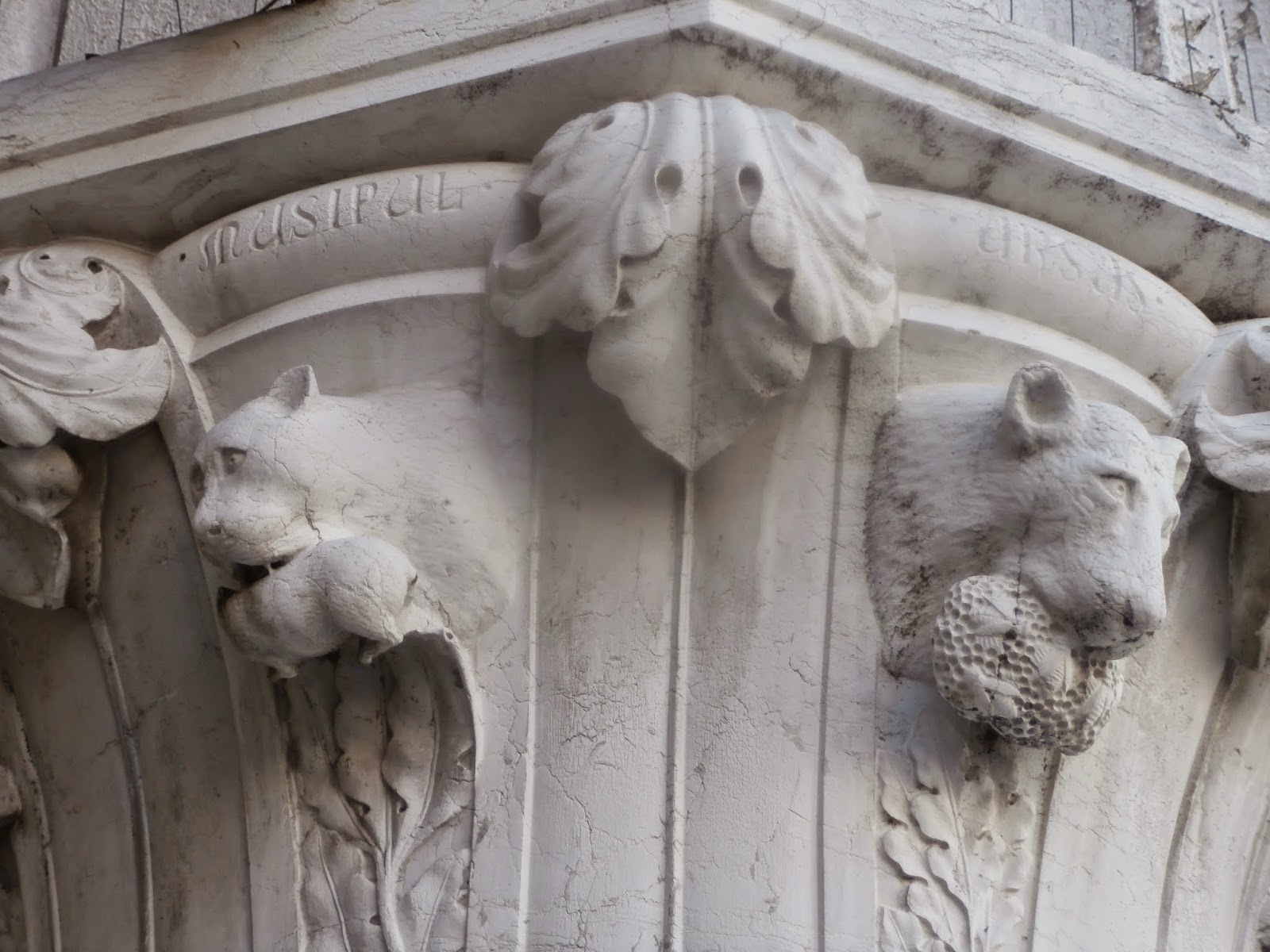 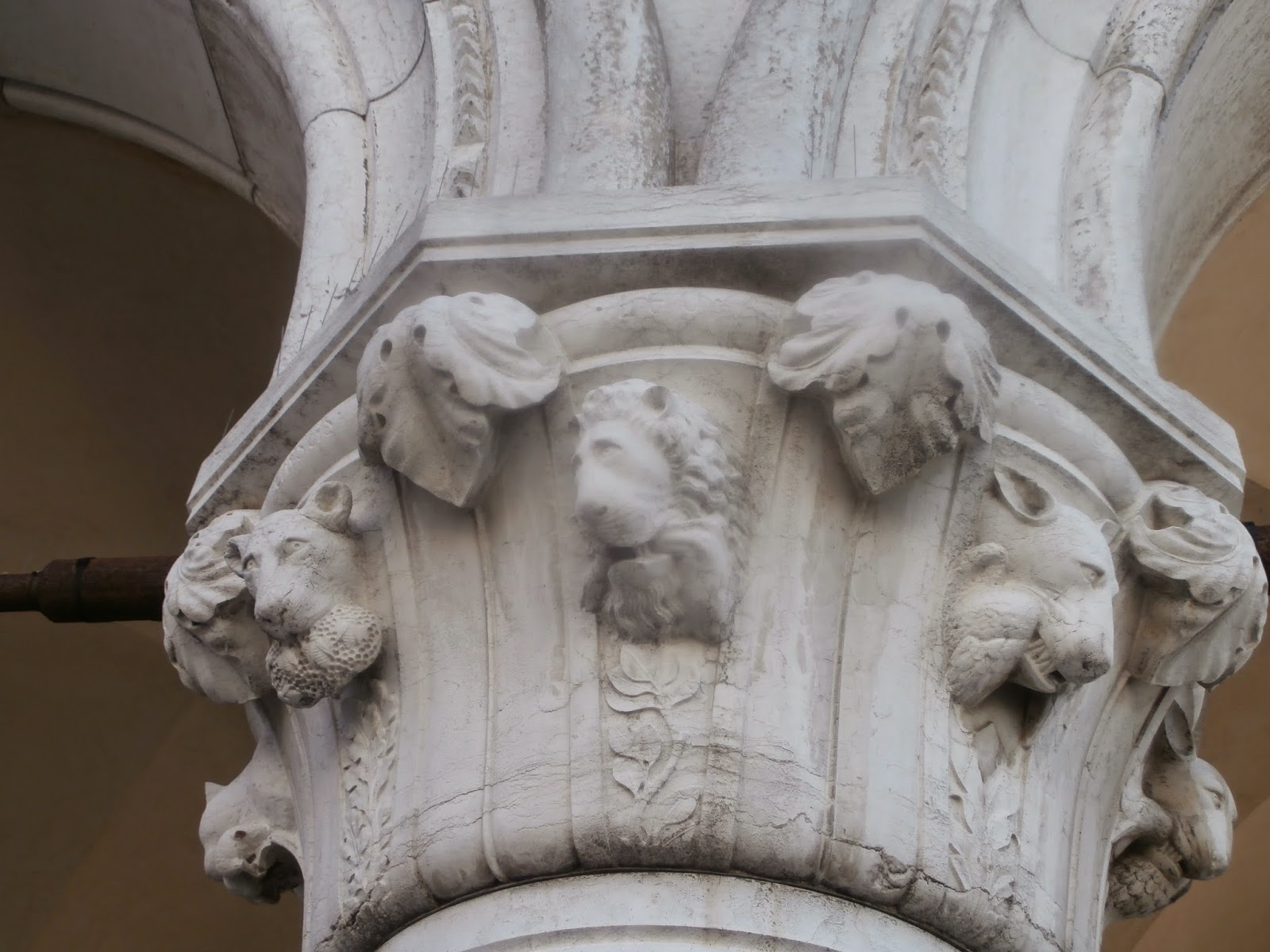 This feline creature –‘Musipul’ is a character in my work-in-progress for children. 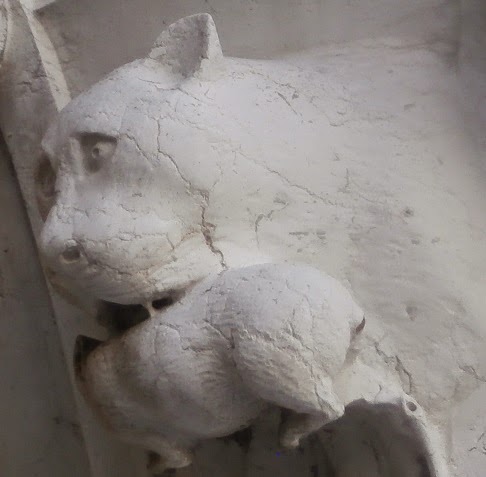 In this, she is a testy Arabian leopard from the Castle of Jabrin in Arabia. But that's another story ... 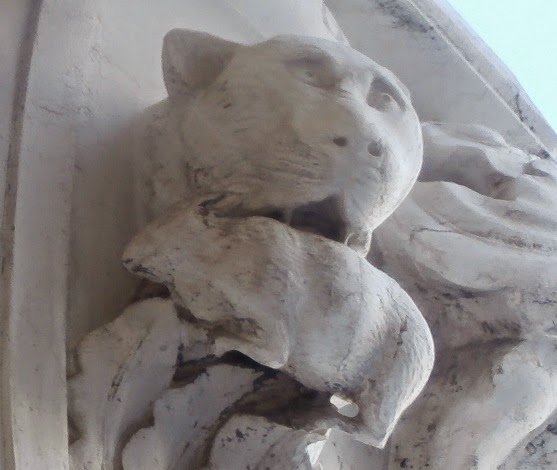 Michelle Lovric's website
Her latest book is The True & Splendid History of the Harristown Sisters, published by Bloomsbury.
Posted by michelle lovric at 01:00

Very interesting. I love looking at details like this.

Definitely something new to look out for!

What a fascinating post, Michelle! How interesting that they mainly date from a specific place and time.

I am obsessed apotropaic images, and can usually trace them back to ancient Rome or Greece, but I can't think of any Roman precedent for these.

Maybe that's because they are purely Christian with their symbolic aspect. I will add a link to this post to my Pinterest page of Apotropaic Images!

Thank you all. I suppose, Caroline, that they are apotropaic in that they are supposed to ward off evil, in showing the righteous beasts devouring the wicked ones.

I also find it interesting that this superstitious - and therefore essentially pagan - element was at work in the vernacular architecture while churches were building spires into the Venetian sky. I suppose it can be summed up in a Venetian proverb ... Primo Veneziani, poi Cristiani. First Venetians, then Christians. The Venetians would take what they needed from anywhere to assure the safety of their Venetianness.