Skullduggery and Sabotage in the East Anglian fens by Rosemary Hayes

Skullduggery and Sabotage in the East Anglian Fens

People think of the East Anglian fenlands as flat and dull, but look a little closer and you come to appreciate their wide skies, their remarkable bird life and their rich and romantic history. 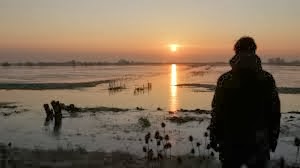 Recently I saw a particularly spectacular sunset in the Cambridgeshire fens as I was returning from a walk along the banks of the great Bedford dyke which connects the River Ouse to the Wash. As I stood watching the red and gold reflections in the water, a marsh harrier drifted silently by and I felt again the eerie atmosphere of this extraordinary tract of land which is as famous for its myths and legends as for its fertile soil.

Nowadays, the fens of East Anglia have some of the best farming land in the country but for thousands of years the area had long periods when it was flooded and uninhabitable, interspersed with drier periods when people moved in to live on the edge of the marsh and on its islands. They ate fish, eels and wildfowl, harvested reeds and sedge for thatching and used peat for fuel.

The Romans saw the potential of the fens and started to build dykes and banks to protect the land from the sea and rivers. However, once the Romans left, the area reverted to marsh and wilderness.

Between 400AD and 1066 building work had begun, on the higher ground, of many abbeys, notably Crowland and Ely, the monks being attracted by the solitude and the ability to be self sufficient.

From the 13th to 15th centuries the drainage systems had all but disappeared and the fens were subject to severe flooding; it wasn’t until the 1600’s, with the age of the ‘gentlemen adventurers’ that a serious attempt was made to drain the land. This was a time of exploration and trade with the Far East and there was a new class of people who had become wealthy through trade rather than land ownership and were keen to invest their wealth. Some of these ‘adventurers’, led by the Duke of Bedford, got together and invited a young Dutch engineer, Cornelius Vermuyden, to design a drainage system for the whole area which, when completed, would provide vast tracts of excellent land whose ownership would be divided between them and the Crown.

After Henry VIII’s dissolution of the monasteries, the grip of the religious houses on the area was loosened, thus removing what could have been powerful objection to the scheme, and work began a few years before the outbreak of the Civil War in 1642. During the war the project was halted, but in 1650 it began again and Vermuyden declared it completed in 1653.

He was over optimistic. Unfortunately, no one foresaw the unintended consequence of the scheme. The drained peat soil started to shrink and dry out and its level dropped to below that of the dykes and rivers. Wind pumps were introduced to overcome this, later replaced by steam pumps and later still by electricity. The battle to keep the fens dry goes on to this day. 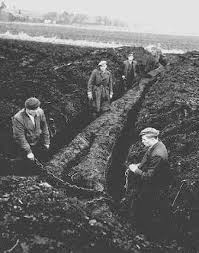 So why choose a drainage scheme as a subject for a children’s book?

It was, of course, the human story behind the scheme that attracted me, the struggle of the 17th century fen dwellers to hold onto their way of life as they fought the powerful, wealthy adventurers and their workforce.

Not only did Vermuyden have, among his workforce, many of his countrymen who hoped to rent land in the reclaimed fens, but there were also Dutch and Scottish prisioners of war and Walloons (Belgiums fleeing religious persecution).
Imagine then, the shock to the people of the fens when this huge influx of foreigners appeared, threatening their livelihood.  Until then, fen dwellers had lived in relative isolation. So much so that myths had grown up about them. They were known as ‘yellow bellies’ and reputed to have webbed feet so they could travel across the marshes. They were mocked for being slow witted and inbred.

They were also superstitious folk, seeing wraith like creatures rising up from the gaseous water and believing in the great black dog of the fens who was loosed just before a death and bounded, howling, across the marshes, rattling his chains.  For death visited them often, not only death from drowning in flood water but also from the ‘fen ague’ (malaria).

However, the fen dwellers were tough and Vermuyden and his workers had not anticipated the level of their opposition. They murdered the interlopers and vandalized dykes, ditches and sluices.

In my book ‘Flight of the Mallard’ I wrote about two fen dwelling children who rescue one of Vermuyden’s sons from drowning (he had 13 children, so there were plenty to choose from!) and thus become pawns in the battle between those draining the fens and the childrens’ friends and family, fen dwellers fighting for their survival, knowing that there would be no place for them on the reclaimed land.

It is a book I wrote a long time ago and for years it was required reading for schoolchildren visiting Wicken Fen, one of the few remaining tracts of original fenland, run by the National Trust.

A visit to the fens never fails to affect me and, as I watched that amazing sunset the other evening, I could imagine the ghostly images appearing as the mist rose from the water and (almost) hear the distant rattle of the black dog’s chains.

Rosemary, I love that part of England and used to visit regularly when I lived in the UK. You evoke its history marvellously. Thank you.

I went to Wicken Fen only a few weeks ago, while staying with friends, and loved it - especially the little cottage and the story of the family that lived there. Fenland does have a curious fascination and magical quality, doesn't it - the Somerset levels, near where I live, have the same feeling. It's very spooky driving across them at night time, when ribbons of mist drift across the roads.

One of my very favourite parts of the world and I'm so glad to think you've enable children to see the magic and mystery in it, that way they will want to preserve it. I always loved the fenland story of Tiddy Mun and his peewit cry. I like to he and his little people might still be hidden in Wicken Fen.

My brother lives in Ely, so I shall get Flight of the Mallard for his daughters. My daughter loved The Blue-Eyed Aborigine by the way, so thank you for that too!

Fascinating post. I've always enjoyed the Fens in fiction: "Gaffer Samson's Luck" by Jill Paton Walsh is a wonderful children's book, and then there's Peter Wimsey story "Nine Tailors" by Dorothy Sayers, both very evocative of place. And yet, though I've lived close by (in Cambridge) I've never really explored. Something to put right!

Flight of the mallard sounds just my sort of book. i too love the fens and was intrigued when I was researching the Anglo-Dutch wars for the Lion of Sole Bay and realised how many of the captured Dutch seamen ended up working and settling there.

I first came across the story of the draining of the fens by the Dutch in Violet Bibby's children's novel Many Waters; I shall read Flight of the mallard as well for another perspective.