The Angels of Mons by Kate Lord Brown 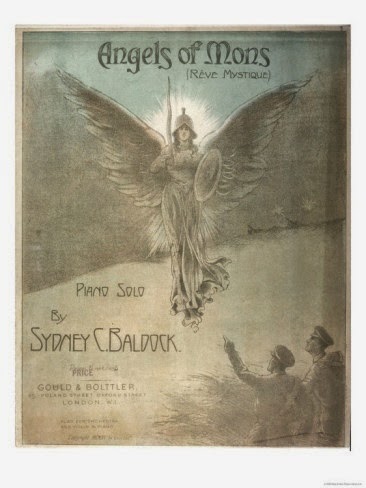 The commemorative service at Mons during the summer reminded me of an interesting tale from WW1 that I came across researching the work in progress. As ever, much of the research has hit the cutting room floor in the final telling - however tempting it is to shoehorn in a fantastic bit of history, if it doesn't serve the story, you have to let it go.

On August 23rd 1914 the British Forces were confronted and outnumbered by enemy troops at Mons. The 'Victory by Christmas' looked set to turn into a protracted nightmare. In the heat of the battle - so the legend goes - a soldier called upon St George for help. 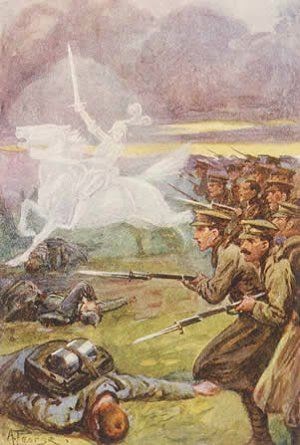 The accounts of angelic and divine intervention at Mons came from several sources. Arthur Machen's 'The Bowmen' is one of the most well known. Printed six months after the event, and conveniently 'unable to reveal sources for security reasons' it was at once military propaganda and a morale boost for the troops and public. Machen described the visions as 'English angels with longbows'. 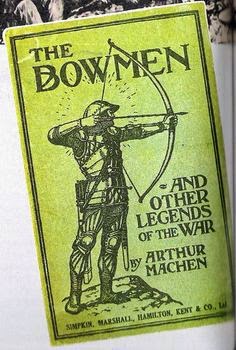 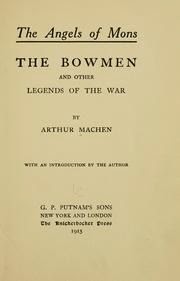 Another account surfaced in a parish sermon, and reached the newspapers. From William Doidge of the Scots Guard, to Brigadier General John Charteris who wrote to his wife on 5th September 1914 of an 'angel of the Lord on a white horse and with a flaming sword', the accounts came from sources across the spectrum of the British forces.

The retreat of the 80,000 from Mons to the Marne saw them caught up in a nightmarish battle of shrieking, thundering guns and shells that tore men limb from limb. In the midst of this furnace of torment, the idea that someone cried 'May St George be a present help to the English' has more than a whiff of propaganda about it. And yet. There are many different accounts of a line of angelic shapes beyond the British line, a cloud of arrows descending on the enemy, and of slain men found with arrow wounds. Or of individual warriors with 'a shining about them', and of three vast angelic figures hovering over enemy lines protecting the British. It was enough to turn one 'old contemptible' I read about from a hard drinker to a teetotal pillar of the community.

Then there was a group of Coldstream Guards, the last to retreat from the Battle of Mons, cut off and lost in the Mormal forest. They had dug in for a valiant last stand, when a tall slim angel apparently beckoned them towards an open field, and a hidden sunken road where they were able to effect their escape from the enemy swarming towards them.

Angelic intervention, or mass hallucination? Whatever the truth, the story of the Angels of Mons helped morale and saw British troops through the hell to come at Loos, the Somme and Passchendaele. It would be interesting to know how many of the HGs have come across tales of supernatural intervention researching their historical periods?

Good morning Kate, Jean d'Arc is the obvious French fighter who heard voices, had visions and she was the enemy of the British, (centuries earlier, of course). Are there any German accounts of soldiers being led by angels/spirits/voices to safety? I don't know.
The call of 'God on our Side' is a very worrying one. We have only to turn on the news today to see the results of it.
Which book is this research for?

I remember years ago reading quite a lot of Arthur Machen's short stories- it was when I was a teenager, and going through a Dennis Wheatley/Bram Stoker sort of phase. Machen had a very vivid imagination! I expect these derived from the instances where British and German troops laid down their arms and had a break from it all - I've just read of an instance in Vera Brittain's Testament of Youth where the Germans and the British agreed to allow each other to collect their wounded from No Man's land without firing on each other - which worked beautifully till the English company was relieved, and their replacements didn't honour the agreement but shot the German orderlies.

Indeed, Carol. Very much looking forward to reading Manda (Scott's) Joan of Arc. This is for the draft just finished, spans WW1 to 1970s.

Sue - that's interesting, I hadn't come across Machen before this. Dennis Wheatley - there's a blast from the past!

By the way - for anyone interested in this kind of thing - I was trying to remember the name of this book: http://www.amazon.co.uk/Third-Man-Factor-Surviving-Impossible-ebook/dp/B002VNFNU6/ref=sr_1_1?ie=UTF8&qid=1411378471&sr=8-1&keywords=the+third+man+geiger 'The Third Man' by Geiger.

I haven't heard of any German equivalents but here might well be. What I was thinking of was the people who thought they saw Princess Diana after her death. This is clearly a much more high stress situation. There are many instances of mass hallucination in the Middle Ages, which have been attributed to ergotism (poisoning due to a fungus on rye - curiously the source of the ergometrine used to accelerate childbirth nowadays). But now I wonder if these were just also due to mass stress..
Thank you! I had heard of the Angel of Mons but had never followed up what that was, so I am very glad to know!

That is interesting, thanks Leslie - shall take a look at ergotism. Princess Diana's death provoked such heightened emotion I wonder if it was a kind of mass hysteria/hallucination - pretty unprecedented emotional outpouring for Brits.

I was just reading about this story recently! In Paul Fussell's brilliant 'The Great War and Modern Memory' he says that Machen first published the story in September 1914 in the Evening News and was 'embarrassed and distressed' that the story had come to be regarded as fact 'within a week'. Fussell adds that many people - especially clergy - assured him angels had appeared and it became almost treasonable to doubt it. Great insight into how legends develop, I think.
ps glad you like the Igtham Mote doghouse.

The above is a link to a blog post I wrote about the Angel of Mons. I grew up hearing about it on a regular basis, and have no reason to doubt what I heard. I was talking to a French pastry chef and asked him about what people in France thought of it. 'God's gospel truth,' he said. I think we live in a world where such things are difficult to even talk about, unless you've dispensed with worrying about being 'normal'.

Thanks, Imogen - I'll look up the Fussell.

Christine - thank you, a fascinating post, and incredible to have a direct link through your grandfather. For what it's worth, I'm on the believers side - and who would want to be normal ;)