TUDOR FICTION: is it all sex and scandal? 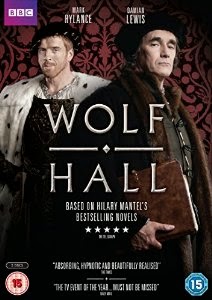 I thought I’d run out of things to say about Wolf Hall when my attention was drawn to Laura Miller’s article in Salon, in which she responds to the TV adaptation of Wolf Hall in the context of other Tudor texts. In it Miller sings the praises of Mantel’s serious approach to a period that she scathingly describes as ‘for chicks,’ applauding the way the author draws out the idea of the Tudor period marking the break from Medieval feudalism and the beginning of the modern world, with the increase of social mobility in figures like Cromwell.

This is all well and good and cogently argued, but Miller also takes an opportunity to serve a crushing and sweeping blow to pretty much all other fictional material set in the period. She compares Mantel’s ‘high-brow’ approach with what she disparagingly terms ‘princess novels’ or Tudor set fiction that is focused on women’s lives. Her main point being that such fiction foregrounds lascivious sex and scandal and in so doing makes it no different to schlocky high-school teen dramas.

Philippa Gregory comes in for a particularly contemptuous drubbing, accused of digging out uninteresting female figures from the past and padding out their stories with romance that has no historical validity. Though Miller makes her point well and there is legitimacy to some of what she says, certainly about the gratuitous soft-porn elements of the Showtime series The Tudors, and the wilful manipulation of history in the teen drama Reign, what she overlooks is the serious nature of some of the themes of much Tudor set fiction.

Even the more commercial, romance led, Tudor novels have a profound darkness that makes them a poor comparison to the teen dramas cited. Yes, there are parallels to situations in which young women are living at close quarters and competing for prestige. Miller correctly points out that in such novels much is made of clothing but refrains from exploring the value and symbolic resonance of women’s clothing in these texts. For the Tudors, an upstart family with a tenuous grip on the throne, clothing was a crucial indication of status and thus merits description. Indeed Mantle also employs, to great effect, descriptions of clothing to create a sense of the importance of the outward representation of rank and affiliation through apparel within the courtly arena, where position and allegiance were of primary significance.

The cumbersome clothing women were laced into was also a part of the broader denial of female freedom in much the same way 21st century women living in fundamentalist Islamic communities are required to cover and restrict their bodies. The early modern female body was a precious commodity and was at once expected to be a site of allure and yet also to be contained and kept out of sight to guard its value.

To view such narratives as inconsequential refuses to acknowledge that for these Tudor ‘princesses’ the stakes were vertiginously high. They describe a world in which young women were brutally murdered for political ends and had to negotiate a dangerous path through a male power structure that gave them no agency.

Surely any woman who can gain even a modicum of power in an oppressively misogynist system merits having her story told, and many of the generation of serious historians who are rediscovering such stories would agree. It is unhelpful to regard all such fiction as romantic clap-trap that uses sex as its narrative drive, when marriage was the primary route to power for women. What is noteworthy about these stories is that it becomes impossible to separate sexual and state policy. Princesses are interesting because of, rather than in spite of, the power that was invested in their bodies, and how they used that power makes for fascinating reading.

By comparing a novel about Anne Boleyn to Gossip Girl, Miller is refusing to acknowledge that these privileged young women are unlike their contemporary counterparts because their stories are inherently tragic – real tragedy that ends in brutal death – when he worst outcome in teen drama is social ostracisation. What could be more pitiful than the execution of of Catherine Howard. Yes, she may have been a shallow girl preoccupied with love (she was seventeen, for goodness' sake) but her life was caught up in a political vortex over which she had no control and as such it is worth inspecting as a means to understand the extraordinary lack of power such women – even queen consorts – had in those days. These women were rendered shallow and infantalised by the paternal hegemony to which they belonged. To compare them with modern women who have sexual and professional freedom, who are educated and, importantly, choose to be largely concerned with superficial matters is missing the point.

Early modern women had no freedom, yet they found ways to make themselves heard. For the first time the humanist project, led in England by Thomas More, encouraged education for women, albeit for a limited and privileged cohort, which was surely an important social change that merits our attention. Take Katherine Parr for example, a minor queen of apparently little political importance, but few are aware that she was one of the first women to publish an original text in the English language. At a time when women were obliged to be silent and submissive, to publish religious political texts was an audacious and dangerous act. Indeed these educated females laid the ground for an unprecedented half-century of female rule in England. To say such lives are not worth examining and reduce them to little more than titillating tales, plays into the hands of the misogyny that sought to silence them in the first place.

Because Cromwell’s story is essentially one of social mobility and money, doesn’t automatically invest it with greater legitimacy, as Miller suggests, indeed it could be said that as women’s bodies were a currency traded at the highest level their stories have equal importance from a socio-economic perspective. Social mobility too was mediated through the bodies of women. Consider how the minor landed gentry such as the Seymours and the Parrs became elevated in such a way. These women’s lives provide a vital key in understanding the period, so please let’s not do as David Starkey has long done, and dismiss them as trivial.

Elizabeth Fremantle is the author of Tudor trilogy: Queen's Gambit, Sisters of Treason and Watch the Lady. ElizabethFremantle.com

Queen's Gambit, about the life of Katherine Parr, has been chosen for World Book Night.

Congratulations on World Book Night. That is FAB news Carolx

Great post, Liz! And even Anne Boleyn, while no Katherine Parr, was not the bimbo she is often portrayed. She was educated too, and if she didn't write books, she certainly read a lot, and had her own opinions on religion. You have made some very good points here.

Agreed. Very well said. Women still struggle today to be taken seriously by men but in the Tudor period they were mere pawns in a deadly game. Even the woman on the throne, either consort or queen in her own right. A woman's ability to produce a healthy son was paramount.

Thanks for your lovely comments. It's a topic close to my heart.

An absolutely excellent post! Dould not agree more and indeed this is what I have argued in my work on Philippa Gregory and will continue to look at in my work on historical fiction by women set in the Tudor period. Thanks a lot!

I meant: Could not agree more...

Excellent post! Without wishing in any way to disparage Mantel and her remarkable achievements, I felt from the beginning that she'd won all those prizes and been so lauded by the critics because she wrote about men and her books were therefore important. When I watched the TV series, I became certain of it. I'd have to read the books to be sure, but I was quite uncomfortable with the representation of women. I felt they were women as men saw them, but that could be the acting/directing and nothing to do with the writing. But the point holds that if you want to win prizes as a woman, write about men. For 'high-brow', read 'male'.
I love your point about clothing too. I talk about this on school visits - in connection with my Georgian and Tudor novels.

I couldn't agree more Marie-Louise. In fact I cut a paragraph where I discussed the notion of the male protagonist automatically making a novel 'serious' as I felt it distracted from the main thrust of my argument. Glad I'm not the only one who feels that.

It's a ticklish subject, isn't it? And I would hate in any way to say that the prizes were undeserved, because clearly Mantel is highly talented and deserved every one. It's just she almost certainly wouldn't have won them writing about women. And I don't think that most of the 'establishment' would even understand their own reasons for making those choices. And it's just as often women who fall into this judgement as men, as you demonstrate so well here.
I'm sure you were right to cut the paragraph - your post is clear and brilliant as it stands.

Yes well said. One problem is that often books about such women which are narrative history or biography are pushed into being more upbeat in order to find a publisher and audience. I'm thinking of Amanda Foreman's biography of Georgiana Spencer, Duchess of Devonshire. Eighteenth century women were still mostly denied agency, certainly property rights and many others. In fact Spencer's life was a tragic one -- this comes out more in Betty Rizzo's Companions without Vows. The problem is it is hard to find a woman who practices real agency without strong compromise or hard punishment. That's why people turn to historical fiction and women who had some power through their relationships with their families or men.

In fact, Hilary Mantel made just the very apposite points you are making in her London Review of Books lecture, when she spoke about the politicisation of royal women's bodies - and was lambasted for it, because she dared to point out that it is still going on, with princesses.
You are so right to make the point about Katherine Parr's scholarship, too - wasn't she thus an important influence on the future Queen Elizabeth, who was highly educated and certainly 'practised agency'? Though of course, at the cost of remaining unwed, and not providing England with an heir. I will confess, however, that I find Philippa Gregory unreadable..