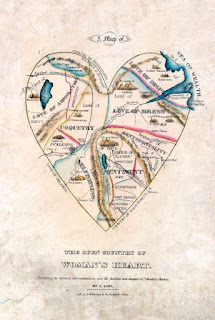 Seeing the river of Novel Reading flowing through the Land of Sentimentality is enough to warm the heart of any writer to boiling point. This Victorian document, purporting to 'Map the Open Country of Woman's Heart' including the 'facilities and dangers to Travellers therein' was - apparently - by 'A Lady'. Though interestingly it was printed by D W Kellogg of Connecticut - I wonder if there's any relation to the founder of the cereal company who was obsessed with regular bowel movements.

Squeezed in at the base of the heart between the Lands of Selfishness and Sentiment, are - almost as an afterthought - some positive attributes. Hope, enthusiasm, discrimination, Good Sense and Prudence. But where is bravery? Or honour? Or sheer sass? In the undulating timeline of history, why have women been sidelined in the Land of Oblivion.

A couple of weeks ago, I taught a hist fic workshop at the Taunton Literary Festival in the wonderful Victorian school room of the Castle Museum. When we were discussing character, I talked about the joy of finding forgotten bits of history - the stories of women Spitfire pilots, women war photographers and women soldiers. One of the students asked 'Are you a feminist'? 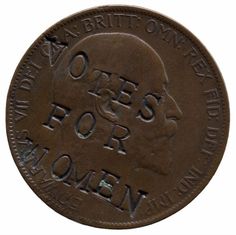 Growing up, it never occurred to me that women were anything but equal with men. We went to career days where we were handed badges with fist punching gender signs and encouraged to sign up as engineers. We were taught to be capable - both to run a home and a business. Did that make us feminists? I don't remember us using the term - feminism seemed to belong to previous generations who had fought for equality. We were told there was no glass ceiling, nothing we could not do or be.

Now, with a teenage daughter of my own, I wonder it that is true. If we redrew the map of a woman's heart today, what would it show? With the film Sufragette, with a fourth wave of New Feminism, what it means to be a woman is once again in the news and a younger generation of women are claiming the word 'feminist'. It feels like there is still a lot to work for.

I was delighted to be asked to contribute a chapter to 'More Passion for Science', a publication about remarkable women in aid of Ada Lovelace Day. Ada was the daughter of Byron, a visionary scientist. I wrote about the women of the Air Transport Auxiliary who inspired my first novel, 'The Beauty Chorus'. It was a moment in history when men and women flew side by side, on equal salary, with equal risks. The more I learnt about them, the greater my admiration became. The women had hearts full of qualities I admire - courage, intelligence, loyalty, passion, bravery, liberty, equality. If that makes me a feminist, then yes I am. How about you? Perhaps in a week when the 'first' British astronaut headed to space according to the press, there is still work to be done. Dr Sharman was the first British astronaut in space, in 1991. But perhaps that doesn't count, or has been overlooked, because Dr Sharman was a woman. 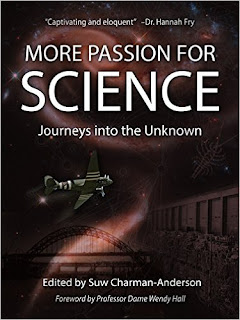 Find out more about Ada Lovelace and the new anthology here.

This is an interesting collection of essays on the subject - I Call Myself A Feminist: The View from Twenty-Five Women Under Thirty

I think the question should be, not, 'Am I a feminist?' for being aware of this, but - 'If you're not aware of this, what kind of fool are you?' What possible justification can you make for arguing that one adult member of the human race should be treated with less humanity and respect than another?

And you're right - the complete lack of acknowledgement of Dr. Sharman is infuriating.