Regrets of a Failed Bell Ringer, by Laurie Graham

I’ve always had a thing about church bells and a brief, unsuccessful career in the bell tower of an English village church forty years ago did nothing to dilute that love. Since then I’ve relished the chaotic clanging of Italian bells which announced ‘Habemus Papam’ and the strange allure of Russian monastery bells, but my heart is always drawn back to English bells. They are part of the soundtrack of my childhood.
I was doomed to failure as a bellringer chiefly because numbers mean nothing to me. On the page they jump about before my eyes. In my ears they might as well be a recitation in Togalog. PINs were invented to torment me and, cruelly, the skills of change-ringing are as beyond me as tightrope walking. And simple change-ringing is child’s play compared to method ringing with its wonderful eccentric peal names. Grandsire Caters, Erin Triples, Stedman Cinques (named after Fabian Stedman, a 17th century campanologist). 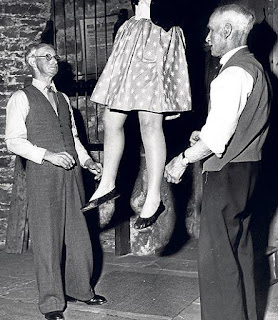 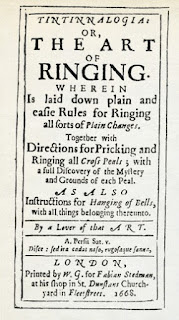 There was another reason I never took to bell-ringing: a warning tale told to all rookie ringers about what can go wrong if you don't develop a feel for the rope. You can see what I mean. But apart from the risk of getting  airborne in an undignified manner it was all very convivial. Historically bellringers have had a reputation for enjoying drink, mustering at the local pub before and after practice, and sometimes, tsk tsk, keeping a stash of ale in the ringing chamber itself.

Times have changed and some bell-towers now find themselves on the defensive. There are villages where blow-ins have complained about having their Sunday lie-in disturbed and and have succeeded in getting the church bells silenced.  A case of statutory noise nuisance, apparently. Have these people no sense of history? Bells were once the 24-hour rolling news service of a community.  Three strokes rung three times told (and tolled) the death of a man, rung twice it signalled the death of a woman, once, the death of a child. Bells rang with urgency to signal an invasion, half-muffled for a funeral or fully muffled for a solemn day like Good Friday. How strange that in an age when people allow their William Tell Overture ringtone to disturb the peace of the world without giving a damn, they object to church bells.

I feel in illustrious company with my love of bells. Charles Dickens (The Chimes),  Lord Tennyson (Ring Out, Wild Bells), John Betjeman  (I heard the church bells hollowing out the sky, deep beyond deep, like never-ending stars.) But it’s to an American, Henry Longfellow, that I turn for my customary December sound clip. He wrote his poem I Heard the Bells on Christmas Day in 1864. His wife was recently dead, his son had been seriously wounded fighting for the Union. Longfellow’s lines run the gamut from despair to hope, and all inspired by the sound of church bells. Here is a very lovely version of it.

This is my final post for the History Girls. You'll still be able to find me at my website but
from next month my place here will be occupied by historical novelist, Katherine Clements.  So thank you very much for having me. Welcome, Katherine. Merry Christmas. And, well, that’s all folks!

Very sorry to say goodbye! Have so enjoyed your posts ....look forward to meeting Katherine, but sad to lose you! Merry Christmas.

Thanks so much, Laurie, for this and all your other posts. We wish you well in future.

Sorry to hear you are leaving.

You might find that you could give ringing another go - if you can get past the basics it is more about learning the blue line than learning the numbers (other than being able to count up to 6 or 8) - take the numbers away and learn the pattern, instead!

A lot of towers are short of ringers so even if you didn't progress to more complex methods you could still be both welcome and useful.

Ringers used to be paid in beer. We've never forgotten that, even though it is no longer the custom!

You've been swell and may it be so:
"The Wrong shall fail, The Right prevail,"
So peace on earth to you and yours!