I’m sure you’ve all got better things to do than read my blog today but as it IS Christmas I started to think about the cosy traditions Prince Albert and Dickens are said to have invented between them. When I went to live in Saudi Arabia in the 1980s I didn’t expect to miss them, as I’m not religious and don’t like turkey or tacky decorations. However, I was furious when the morality policemen, or mutaween, confiscated the Christmas tree at my daughter’s playgroup. Remembering this reminded me that Cromwell also banned Christmas, in 1652, and for eight years there were no public festivities in England.

One of the customs the Puritans banned was the appointment of the Lord of Misrule, also known as the Christmas King, a tradition which can be traced back to the Roman Saturnalia. From New Year’s Eve until Twelfth Night he was to entertain the community and turn things upside down.

In 1595 the Puritan Philip Stubs or Stubbes wrote, in his Anatomie of Abuses:

The wildheads of the parish, conventing together, choose them a Grand-captain (of all mischief) whom they ennoble with the title of my Lord of Misrule, and him they crown with great solemnity and adopt their king. This king annointed, chooseth forth twenty, forty, threescore or a hundred lustyguts, like to himself, to wait upon his lordly majesty, and to guard his noble person...Then march this heathen company towards the church and churchyard, their pipers piping,their drummers thundering,their stumps dancing, their bells jingling, their handkerchiefs swinging about their heads like madmen, their hobbyhorses and other monsters skirmishing among the throng; and in this sort they go to church...like devils incarnate with such a confused noise, that no man can hear his own voice. Then the foolish people they look, they stare, they laugh, they fleer, and mount upon the forms and pews to see their goodly pageants solemnised in this sort.

The Lords of Misrule gave themselves preposterous alliterative titles, such as Sir Morgan Mumchance of much Monkery in the county of Mad Mopery. 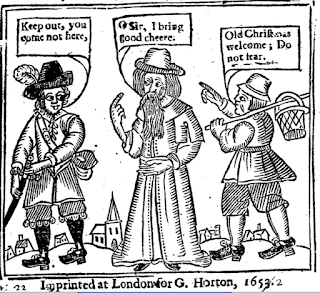 Mince pies were also considered offensive. They used to be filled with minced meat, including pheasants, hares, rabbits, pigeons and capons. They were large, oblong ( to represent Christ’s crib) and sometimes topped by a baby Jesus made of pastry. The puritans considered this idolatry, a popish superstition.

There was a war of pamphlets over the pros and cons of celebrating Christmas. One Puritan pamphlet had the catchy title: Christmas Day, the old Heathens’ Fasting Day in honour to Saturn their Idol-God, the Papists’ Massing Day, taking to hearth the Heathenish customs, Popish superstitions, ranting fashions, fearful provocations, horrible abominations committed against the Lord and his Christ on that day and the days following.

Another pamphleteer, protected by anonymity, dragged class into the argument and retorted: A Ha! Christmas, This Book is a sound and good persuasion for Gentlemen, and all wealthy men, to keepe a good Christmas. Here is proved the cause of Free-Will Offerings, and to be liberall to the poore, here is sound and good arguments for it, taken and proven out of Scripture, as hath been written a long time.

John Evelyn, a Royalist and Anglican, defied the government when he attended illegal Prayer Book services in London. 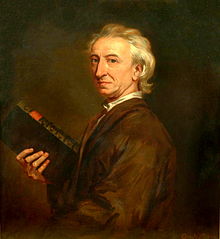 Then as now, politics and religion were inextricably mixed. In 1657 he was arrested:

Sermon Ended, as he was giving us the holy sacrament, the Chapell was surrounded with Soldiers: All the Communicants and Assembly surpriz’d and kept Prisoners by them, some in the house, others carried away...When I came before them they tooke my name and aboad, examined me, why contrarie to an Ordnance made that none should any longer observe the superstitious time of the Nativity (so esteem’d by them) I durst offend, & particularly to be a common prayers, which they told me was but the Masse in English, & particularly pray for Charles Stuard, for which we had no scripture.

After the Restoration people soon reverted. On Christmas day 1662 Pepys records that he went to a Christmas service in the chapel at Whitehall Palace:

Methought he (Bishop Morley) made but a poor sermon, but long, and reprehending the common jollity of the Court for the true joy that shall and ought to be on these days. Particularized concerning their excess in playes and gaming...Upon which it was worth observing how far they are come from taking the reprehensions of a bishop seriously, that they all laugh in the chapel when he reflected on their ill actions and courses. He did much press us to joy in these publick days of joy, and to hospitality. But one that stood by whispered in my eare that the Bishop do not spend one groate to the poor himself. 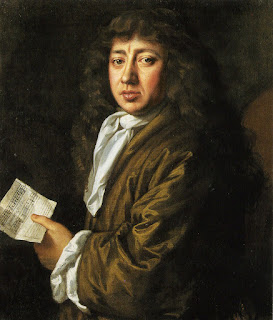 Bah, humbug, eh? The Puritans were right, Christmas celebrations WERE pagan, but there are reasons. When Christianity was new, the leaders of the Church found it easier to get converts if they could persuade them they didn't have to change too much. Without that, Christianity might have remained a small Middle Eastern sect. This never occurred to the likes of Cromwell, did it?

Have a great festive season, hopefully away from the fun police.

Absolutely, Sue. I wonder if Christmas would have disappeared in this country if the Puritans had stayed in power. I love the way people always do defy the authorities - in Saudi Arabia foreigners used to go to illegal masses and christenings.

Sir Morgan Mumchance of much Monkery in the county of Mad Mopery?

Isn't that from Blackadder?

Blackadder would make a brilliant Lord of Misrule, wouldn't he?

I hate mince pies myself and am a Quaker and they didn't use to celebrate Christmas: luckily, things have changed. But I also hate the commercialisation of the whole thing and Christmas bling. I'd like to send Cromwells police to the shops who start Christmas displays in August! Great blog, Miranda.

Thanks, Leslie, and Happy New Year to everybody. Perhaps we should dress up and go round the shops next autumn?