I didn’t intend to go to the art exhibition now on at London’s centre for Russia-lovers, Pushkin House. I was there for a talk on something else Russian and cultural in the same room, to do with the novel I’m researching, and very interesting it was too. Yet, as I listened to the talk, I couldn’t help but be struck by the textiles hung on the walls. They weren’t particularly astonishing when you first came in. Their (brilliantly) bizarre wrongness took a while to sink in, and make you stare.


The artworks were big blanket-like knits in dingy colours, with dividing lines that made them look like brick walls (think Pink Floyd album covers), and with graffiti-like Russian words in bright wools sewn on. Slogan type words, only backwards, or upside down, or altered; or swearword type words. 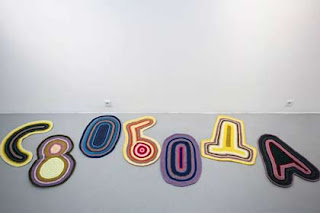 On another wall there were some neatly crocheted multi-coloured shapes – the kind of sweet table-mat thing you can imagine a granny with a slightly wonky sense of colour working, over a nice cup of tea. But these shapes were Russian letters, and the letters were strung together in more words, and, again, they were quite subversive, altered, wrong versions of Soviet slogans.

It was definitely confusing to see all those very butch power words – the shorthand script of the Soviet elite who, in their 70 years in power, gave us Stalin and the Gulag and millions of deaths, and the brutal vocabulary of choice of the violent Russian underworld that flourished under them – re-rendered here in neat, fluffy, well finished plain-and-purl-and-a-bit-of-embroidery. If you ever wanted an illustration of the feminisation of history, this was it.

It was only after the talk was over, and I turned round and noticed the quietest exhibit of all, at the back of the hall, that I actually burst out laughing.

This one was a large white lacy oblong, with frilly edges – the kind of cosy, conservative decorative item one might expect to find on a wire, not quite covering a cobwebby dacha window somewhere, with snow outside and whichever kindly auntie had done the crocheting glancing proudly round at it as she passed more tea (possibly from a samovar). It looked the concentrated essence of a particular kind of Russian innocence – the get-away-from-politics-to-the-simple-life mood that makes country weekends in those little wooden houses so enchanting. At least, it looked that way until you looked more closely and saw, all mixed up with the intricate patterns, that its main decorative feature was the – wildly inappropriate - great shouty Soviet propaganda word, PRAVDA (TRUTH), also the name of the main Soviet-era newspaper, followed by a disconcerting question mark.

The pieces, it turns out, are the work of a young Moscow artist called Olga Bozhko. 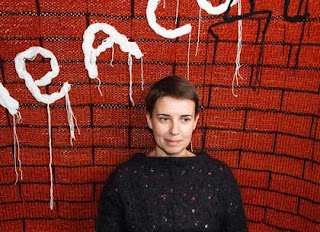 The exhibition blurb says Bozhko “plays with ideas of memory and history as they are reflected both in the language of the streets and in the language of government propaganda. She is fascinated by the way everyday Russian language mutates alongside ever-changing Russian perceptions of history. Living and working in Moscow, Bozhko pays attention to the graffiti, advertising and government slogans which comment, often unconsciously, on Russian society today.”

“The works for installation were knitted by hand - a symbolically soft and feminine medium. The large size of the works imply a considerable investment of labour and time: we usually associate this type of labour with domestic craft, which sets out to ‘wrap’ home life in comforting, soft hand-made material. But the images and particularly the inscriptions on the works are unsettling. Some of them imitate brick walls covered with angry graffiti, others - net curtains - but with slogans woven in to them. In the context of the elegant early Georgian architecture of Pushkin House, they turn into politically-charged comments on the past and present of Russia.”

The one that struck me most wasn’t in the room at all. It was at the bottom of the stairwell. 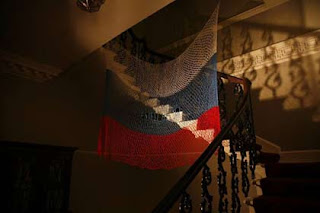 It’s a large hand-knitted fishing net, in the red, white and blue colours of the Russian flag.

The inscription Bozhko has snuck into the middle of the net looks and sounds like the heroic early Soviet propaganda slogan, “Raby Ne My” – “We Are No Slaves”. Between 1917 and the onset of perestroika in the mid-1980s, this phrase always featured in the Soviet primary school literacy programme and as a result resonates today with generations of Russian-speakers.

By now, though, I knew better than to take Bozhko’s slogans at face value. So I looked again. Sure enough, she’d changed a few letters to give a very different message, “Ryby Nemy”, or “Fish Are Dumb” – the title of her exhibition.

“This play on words,” Pushkin House’s gloss on the show says, “shows how very subtle changes can disarm (and in fact then re-arm) a powerful propagandistic message. To Russian ears, the phrase ‘We are no slaves’ is associated with one of the grand ideological narratives of the last century; ‘fishes are dumb’ may be read factually or of course as a metaphor for silent shoals of people caught in nets of government propaganda.”

“I like these,” I said, with growing fellow-feeling. Bozhko seemed so clearly the visual equivalent of so many female historical novelists today – cleverly re-examining the past, using new methods and materials and values, emphasising some things more and de-emphasising others, poking a bit of quiet fun at some of the sacred cows of tradition, and generally filling in the gaps left by the male academicians who did the writing first time round.

“I don’t,” the man sitting next to me replied, in cross David Starkey style. “I decided that before you got here.”

But you might enjoy Bozhko's mocking girl challenge to the orthodoxies of modern Russian history if you are open-minded. Even if you're male.

Interesting to know that such challenging work is being done - and you obviously have to be a Russian speaker to really see it, so thank you, Vanora! Who owns/runs Pushkin House? Not the Russian government, presumably?