The Greek myth of Persephone has often been retold as a sweet and charming little story, a just-so fable about the cycle of winter and spring. Here’s an extract from 'The Pomegranate Seeds,' a 19th century version for children by Nathaniel Hawthorne. Persephone - under her Roman name, Proserpina - has begged Mother Ceres for permission to pick flowers. Attracted by an unusually beautiful blossoming bush, she pulls it up by the roots. The hole she has created immediately spreads, growing deeper and wider, till out comes a golden chariot drawn by splendid horses. 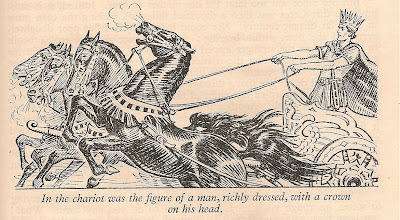 In the chariot sat the figure of a man, richly dressed, with a crown on his head, all flaming with diamonds.  He was of a noble aspect, but looked sullen and discontented; and he kept rubbing his eyes and shading them with his hand, as if he did not live enough in the sunshine to be very fond of its light.
“Do not be afraid,” said he, with as cheerful a smile as he knew how to put on. “Come!  Will you not like to ride a little way with me in my beautiful chariot?”

Reducing the myth to a 19th century version of ‘don’t get into cars with strange men’, Hawthorne tells how King Pluto (a spoiled Byronic rich boy) makes off with the ‘child’ Proserpina and takes her into his underground kingdom, where she refuses to eat. Hawthorne archly explains that if only King Pluto’s cook had provided her with ‘the simple fare to which the child had been accustomed’, she would probably have eaten it, but because ‘like all other cooks, he considered nothing fit to eat unless it were rich pastry, or highly-seasoned meat’ – she is not tempted. In the end, of course, Mother Ceres finds her daughter, and Jove sends ‘Quicksilver’ to rescue her but not before (‘Dear me!  What an everlasting pity!’) Proserpina has bitten into the fateful pomegranate – and her natural sympathy for the gloomy King Pluto leads her to declare to her mother, ‘He has some very good qualities, and I really think I can bear to spend six months in his palace, if he will only let me spend the other six with you.’ 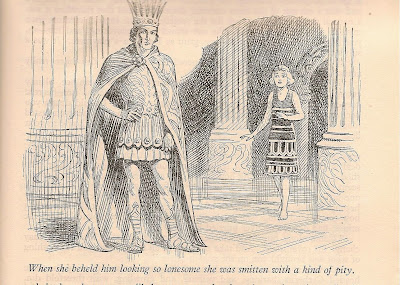 And lo, the happy ending. Prettified as this is, no one would guess that Persephone – whose name means 'she who brings doom’ – was one of the most significant of Greek goddesses. In Homer, it is to her kingdom which Odysseus sails:

Sit still and let the blast of the North Wind carry you.
But when you have crossed with your ship the stream of the Ocean
you will find there a thickly wooded shore, and the groves of Persephone,
and tall black poplars growing, and fruit-perishing willows;
then beach your ship on the shore of the deep-eddying Ocean
and yourself go forward into the mouldering home of Hades.

As Demeter’s daughter, she is originally named simply ‘Kore’ or ‘maiden’. When Kore is stolen away, Demeter searches for her throughout the earth, finally stopping to rest at Eleusis, outside Athens. There, disguised as an old woman, she cares for the queen's son, bathing him each night in fire so that he will become immortal. When the queen finds out, she interrupts the procedure and the child dies. The angered goddess throws off her disguise, but in recompense teaches the queen's other son, Triptolemos, the art of agriculture. Meanwhile, since the crops are dying and the earth will remain barren until Demeter's daughter is restored, Zeus persuades Hades to return Kore to her mother - so long as no food has passed her lips. But Hades has tricked Kore into eating some pomegranate seeds, and she must therefore spend part of every year in Hades. Kore emerges from the underworld as Persephone, Queen of the dead. And a temple is built to Demeter and Persephone at Eleusis, which every year will host the Great and the Lesser Mysteries.  The participants would:

[walk] the Sacred Way from Athens to Eleusis calling for the Kore and re-enacting Demeter's search for her lost daughter. At Eleusis they would rest by the well Demeter had rested by, would fast, and would then drink a barley and mint beverage called Kykeon. It has been suggested that this drink was infused by the psychotropic fungus ergot and this, then, heightened the experience and helped transform the initiate. After drinking the Kykeon the participants entered the Telesterion, an underground `theatre', where the secret ritual took place. Most likely it was a symbolic re-enactment of the `death' and rebirth of Persephone which the initates watched and, perhaps, took some part in. Whatever happened in the Telesterion, those who entered in would come out the next morning radically changed. Virtually every important writer in antiquity, anyone who was `anyone', was an initiate of the Mysteries.

(Professor Joshua J. Mark on the Eleusinian Mysteries, at this link: http://www.ancient.eu.com/article/32/)

The story really does contain all those mythic, seasonal references. While Persephone is in the underworld, the plants wither and die; there are the scattered flowers dropped by the stolen girl, there are the significant pomegranate seeds: but this is much more than a pretty fable.  It’s a sacred story, which conveyed to the initiate the promise and comfort of life after death. 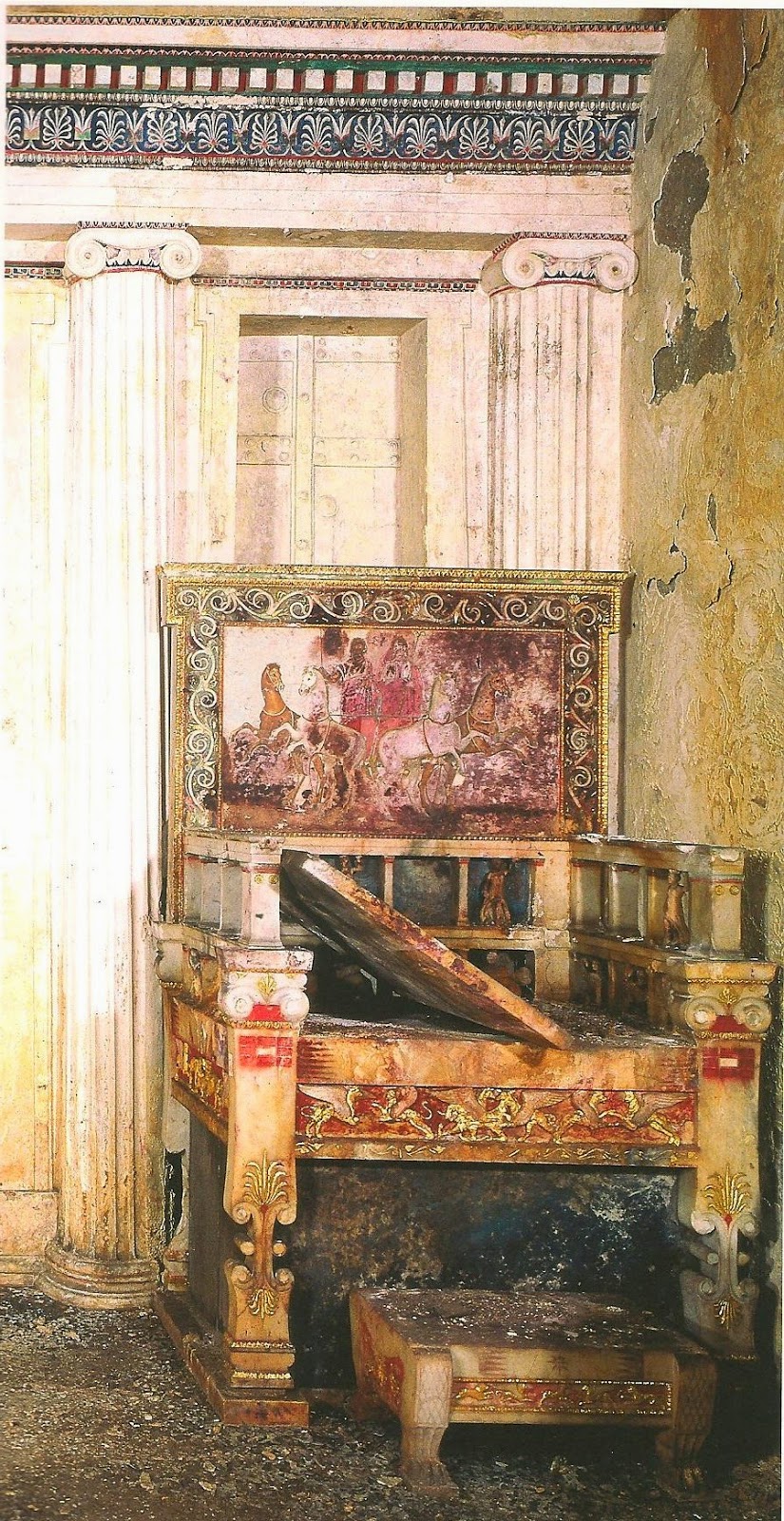 A couple of years ago, I went to see an exhibition of treasures from the royal capital of Macedon, Pella, at the Ashmolean Museum in Oxford. The treasures were dazzling, and the exhibition also included photographs of the lavish interiors and furnishings of the royal tombs of Philip II (father of Alexander the Great) and his family, at Aegae. In the tomb of Philip’s mother, Euridike, was a fabulous chair or throne.  On its seat had rested the chest containing the Queen’s burned bones, wrapped in purple... 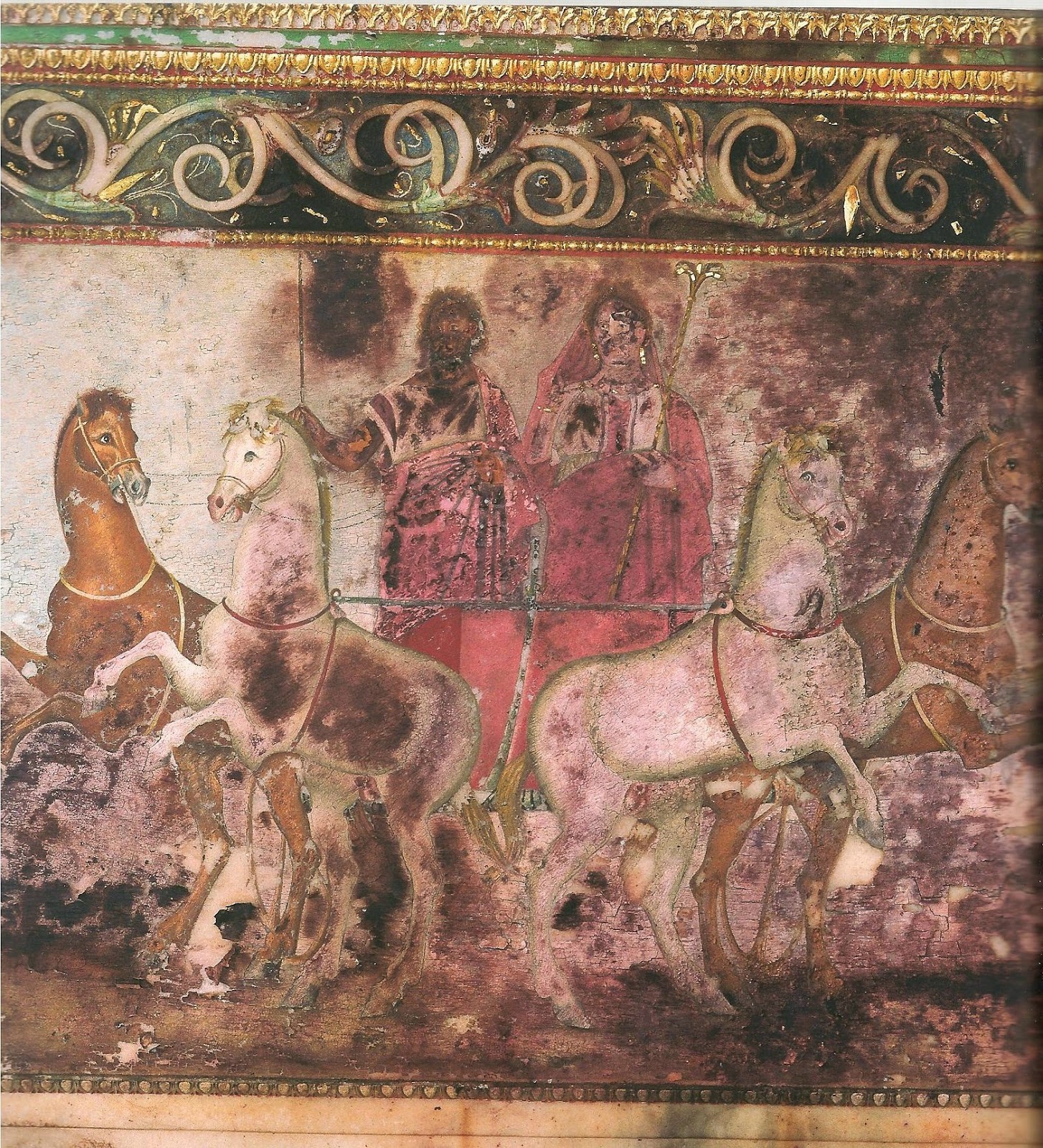 ...while on the back of the throne is a painting depicting Hades and Persephone riding together in triumph on their four-horse chariot. In another tomb at Aegae, Demeter is shown lamenting the loss of Persephone, while on another wall, Hades carries her off.  For me, it seems these images are being used in much the same way that we would place a cross on a Christian tomb. They are not merely referencing, but calling upon a significant myth, a myth with immediate, emotional potential, a myth that speaks of life beyond the doorway of death.

Although these tombs belong to the Classical era, in many ways the Macedonian royals had more in common with the heroic Mycenean age of a thousand years earlier.  Many Macedonian consorts acted as priestesses as well as queens. At the funeral pyre of Philip II, in 336 BC, it’s startling to learn that his youngest wife, Queen Meda, went to the flames with him, along with the dogs and horses which were also sacrificed.  But she was possibly a willing victim.  Dr Angeliki Kottaridi explains; ‘According to tradition in her country, [this] Thracian princess followed her master, bed-fellow and companion forever to Hades. To the eyes of the Greeks, her act made her the new Alcestes [in Greek mythology, a wife who died in her husband’s place] and this is why Alexander honoured her so much, by giving her, in this journey of no return, invaluable gifts’ – for example, a wreath of gold myrtle leaves and flowers: 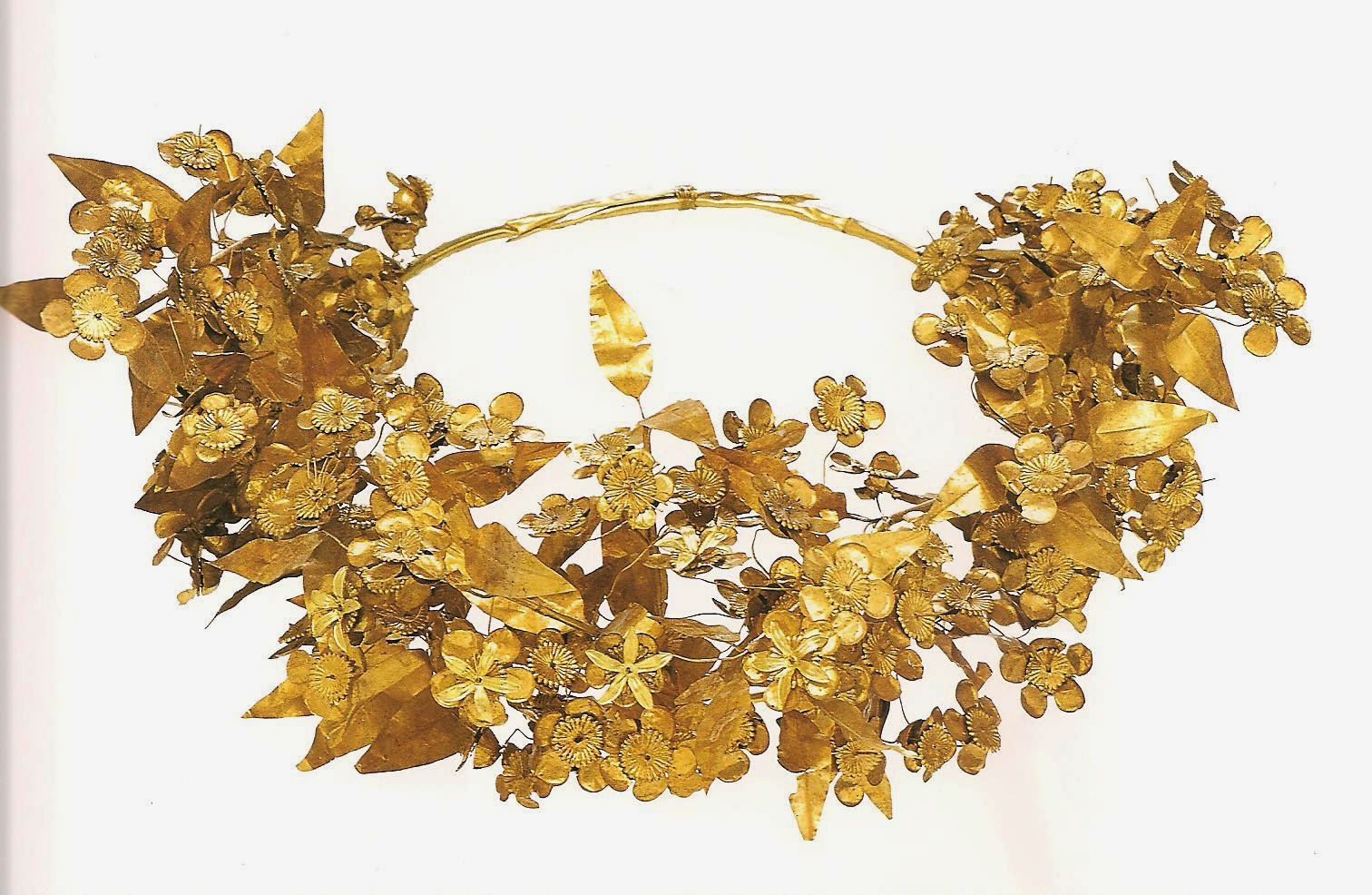 In the Great Eleusinian Mysteries, Demeter gave to mankind her cherished gift, the wisdom which beats death. With the burnt offering of the breathless body, the deceased, like sacrificial victims, is offered to the deity. Through their golden bands [pictured below] the initiated ones greet by name the Lady of Hades, the ‘fearsome Persephone’.  …Purified by the sacred fire, the heroes – the deceased – can now start a ‘new life’ in the land of the Blessed; in the asphodel mead of the Elysian Fields.

Dr Angeliki Kottaridi: “Burial customs and beliefs in the royal necropolis of Aegae”, from ‘Heracles to Alexander the Great, Treasures from the Royal Capital of Macedon’, Ashmolean Museum, 2011

For me, one of the most moving items in the exhibition was this small leaf-shaped band of gold foil, 3.6 cm by 1 cm.  Upon it is impressed the simple message:

And I wonder, I wonder about that leaf-shape. The goldsmiths of Macedon were unrivalled at creating wreaths – of oak leaves and acorns, or of flowering myrtle that look as though Midas has touched the living plant and turned it to gold. Would such artists really have used any old ‘leaf shape’ – or is this slim slip a gold imitation of the narrow leaf of the willow – the black, ‘fruit-perishing willows’ which Homer tells us fringe the shores of Persephone’s kingdom? 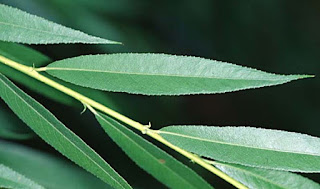 Picture credits:
Photos of Macedonian tomb and goods from Heracles to Alexander the Great, Treasures from the Royal Capital of Macedon’, Ashmolean Museum, 2011

Fascinating, thank you - I knew something of the Eluesinian mysteries but you have illuminated them.
Hawthorne was my introduction to reading Greek myths for myself; when I asked for more my father gave me Robert Graves two volume Penguin edition. At the age of c10 I got very confused about why sleeping with someone seemed to cause so much trouble...

I have always been fascinated and horrified by the story of Persephone. The black horses and chariot coming out of and - still worse - plunging back into the earth ...

Fascinating - and very timely for me, since I am just starting a new middle grade series about King Alexander's daughter by the Amazon queen, where Hades has an important part and Queen Persephone has yet to make an appearance... it's got a bit stuck (awaiting publisher decisions), but this post has got me inspired all over again...

I've come to this late, Kath. Thank you - a wonderful post.

I never realised before that Persephone is somewhat equivalent to Hel in Norse myth.