Since my latest novel THE ENGLISH GIRL comes out in just a few days’ time, this month I thought I’d write about a few of the real-life historical figures that inspired my characters, and the particular relationship between two of them that inspired the whole story. 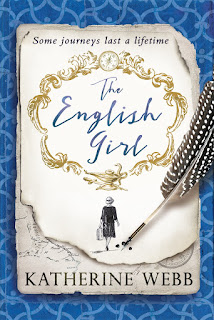 THE ENGLISH GIRL tells the story of Joan Seabrook, a young woman who goes to Arabia in 1958 in search of adventure, and gets a good deal more of it than she bargained for thanks to her involvement with Maude Vickery, an early pioneer of desert exploration and idol of Joan’s, now living in retirement in Muscat. It’ll come as no surprise to anyone with an interest in the history of exploration that the woman who inspired the character of Maude was Gertrude Bell. I first discovered her when I read Janet Wallach’s excellent biography of her about eighteen years ago, and I remember being bothered that I hadn’t heard of her before, when she had done such amazing things.

Born in 1868 to an aristocratic family in the north of England, Gertrude took her position of wealth and privilege, and, perhaps rarely for a woman at that time, did something with it. Fiercely intelligent, she studied History at Lady Margaret Hall, Oxford University, and took first class honours (though women were not actually awarded degrees at that time). Her education didn’t stop there — she was a tremendous autodidact, and continued to study and learn however she could, teaching herself latin because she was so frustrated by the ‘blank wall of my ignorance of it’. She began to travel; to study archeology and classical civilisation; to write, and she never stopped — she didn’t marry, but devoted her life to travel and discovery.

Gertrude developed a deep love of the Middle East early in her career, and spent more of the remainder of her life there than ‘at home’ in England — her letters record her delight each time she returned to ‘my east.’ She travelled extensively in Egypt, the Levant, Syria and Mesopotamia, becoming fluent in Arabic, writing books and articles on the remains of ancient civilisations she visited, and on the structure of modern life there. She became ‘a personage’ to the sheiks there — no small feat for a woman, and a European infidel to boot. By the time of the First World War, no westerner knew the area, or its people and politics, better than Gertrude Bell.

Gertrude first met Thomas Edward Lawrence (1888-1935), later known as Lawrence of Arabia, when he was a young man in his twenties, on an archeological dig. She commented in a letter that he would ‘make a traveller one day.’ Despite being twenty years his senior, and notoriously irascible, the two became lifelong friends and rivals. They didn’t always see eye to eye, but had a great deal of affection and respect for one another. Later, when Lawrence led the Arab Revolts of 1916-18, his success relied heavily on Gertrude’s knowledge and writings of the tribes and their internal politics, though she was given little credit outside of the Political Office in Baghdad. After the war, they were both involved in the discussions that led to the re-drawing of the political map of the area, with the creation of the modern countries of Palestine and Iraq. Gertrude foresaw but could do nothing to mitigate the problems these new countries would suffer by being drawn along geographical and political rather than tribal and sectarian lines.

Gertrude found self-promotion and the idea of fame both repugnant and vulgar, and however pleased she was to have some renown amongst the Arabs, she certainly wouldn’t have wanted the fame or ‘myth-making’ that surrounded Lawrence. They even met for lunch to discuss the matter, and she counselled him to write The Seven Pillars of Wisdom to help counter the hyperbole. Still, however unbothered Gertrude was at this injustice, it bothered me! Short of leading men into battle, she did everything Lawrence did and more — and given that she did it earlier, and on her own, it’s fair to say that she did it backwards in high heels to boot. Their relationship got me wondering — what if they hadn’t got on? What if they’d fallen in love — and then out of love? What if their rivalry had turned bitter, and led to acts of underhandedness, and betrayal? This was the germ of the idea of the story at the heart of THE ENGLISH GIRL.

The male counterpoint to my character of Maude is Nathaniel Elliot, her childhood sweetheart. The inspiration for his life and travels came from Wilfred Thesiger (1910 - 2003), known as the last of the great explorers, and the man who explored the Empty Quarter of Arabia more comprehensively than anybody during five years in the 1940s. From a less wealthy background than Gertrude Bell (though still educated at Eton and Oxford), Thesiger was forced to explore on the sly, when he was sent there by what would later become the UN’s Food and Agricultural Association, to look for the breeding sites of Africa’s great locust swarms. Rather than travelling with a European team or equipment, Thesiger ‘went native’. Abhorring all modern technology, he travelled with Bedouin guides, and lived as one of them, with all the inherent privations and hardships that that entailed. Thesiger was a man in love with the solitude and beauty of the desert, even when it almost killed him — an attitude I tried to embed into each of my characters. He once said that even the celibacy of the desert hadn’t bothered him at all, and that marriage ‘would certainly have been a crippling handicap.’

By the time he wrote his wonderful book about the Empty Quarter, Arabian Sands, in 1959, Thesiger was already lamenting the end of the era of exploration. Cars, roads, aeroplanes — he loathed them all, and the way they made the planet smaller, running roughshod over its mysteries. One wonders what he would have made of satellite phones and GPS. It was indeed the end of an era — none of us will ever be able to take ourselves as far from civilisation as he did, and even though I am probably not the type to take on such journeys in any case, I can’t help feeling a little sad that they are no longer possible; that all that remains to us now are the ghosts of adventure, loitering along well-trodden routes. It’s this strange nostalgia for adventures never to be had that leads my character, Joan, into an extraordinary situation…

I've read about Gertrude Bell too, and Thesiger - what amazing characters they were! Your book sounds wonderful.