Through the Shop Window - Celia Rees

The exhibition could be about any town, large or small, in any part of the country, but it is my town, the town where I live, Royal Leamington Spa. It offers a fascinating glimpse into a lost, almost forgotten world but one which existed well within living memory, the last vestiges disappearing in the 1990s. One of the last shops to go was Toytown, a much loved emporium, haunted by generations of children. It sold everything from Steiff Bears to pocket money toys. Every exhibit brings part of the past back into being. A neon sign, a logo on a paper bag sparks a memory, sharp and sudden. Visits to Toytown in its heyday. My daughter inspecting the Hello Kitty collection, selecting an addition to her growing family of Sylvanians. 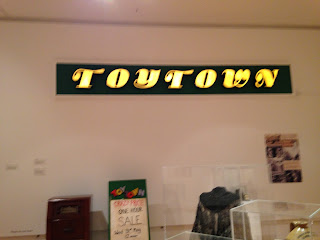 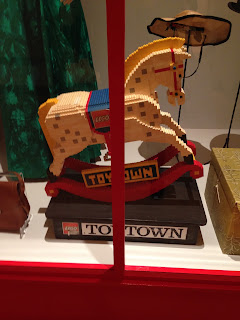 The town grew up and owed its prosperity to the Spa and Pump Rooms. Like so much else these have gone now. Only the building remains. The Library occupies what used to be the Victorian Swimming Baths and the Spa now houses the very Museum and Art Gallery where this exhibition is taking place.

In Leamington, the main shopping street is called The Parade. It used to be occupied, like High Streets up and down the country, by small independent retailers, family firms which catered to the town's people in a variety of different shops. It was a world where women went out each day, shopping basket at the ready, where groceries were delivered by boys on bicycles and people could buy goods on account. 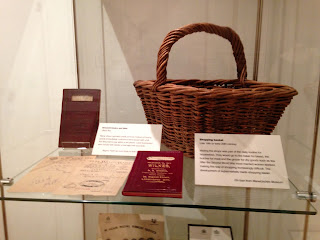 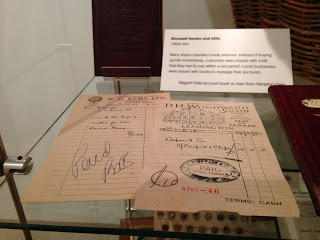 The town was a prosperous place. It had four department stores: Bobby's, Woodward's, E. Francis and Sons and Burgis and Colbourne. The only one that remains is what used to be Burgis & Colbourne - it's now a House of Fraser. Burgis & Colbourne had a wonderful Food Hall, like a miniature Harrods, which smelt of ground coffee and smoked ham, where everything was weighed and packaged and which sold impossibly exotic things in Epicure tins, the kind of food one read about in books
. 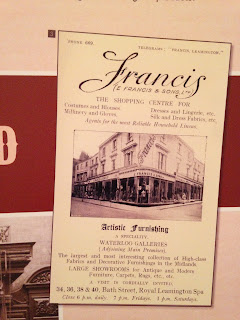 My parents came from Leamington Spa and we would often come to the town to visit relatives and to shop. My mother had worked in Bobby's and then Francis & Sons. She went into retail straight from school and stayed until she got married. Shop work was seen as a skilled occupation, a respectable job for a young woman and working in one of the department stores was a particularly sort after position. This is a picture of her, hair newly shingled, on the roof at Bobby's with some of her co-workers. She went on from here to work at Francis & Sons in Millinery and Drapery, Fabrics and Haberdashery. She was a skilled dress maker, taking advantage of the latest patterns and the high quality fabrics to make most of her own clothes.


When my mother's younger brother left school, he went to work in Burgis & Colbourne's furniture stores. Unlike my mother, he  hated it. He left as soon as he could and went to Horticultural College because he couldn't stand working indoors.

When I came to Leamington as a child in the '50s and '60s, the shops had hardly changed. They were all still there, the independent chemists, the boot and shoe maker, the tobacconist and the watchmaker, the bespoke tailor, the dairy and the milliner. The Parade was very like the High Street in Solihull (where we lived) but bigger and grander, although the shops were not as large or imposing as those on New Street and Corporation Street in nearby Birmingham. We would sometimes have lunch in the restaurant at Bobby's. I remember thinking it was very grand and grown up with heavy silver cutlery, white linen napkins, the waitresses in black uniforms with aprons and caps.

It was a world that was about to change. Very little of it remains. Tarnished cutlery from Bobby's restaurant is now encased in a vitrine like an archeological exhibit. Bobby's Department Store is a Travel Lodge. Francis & Sons was knocked down in the '80s. Its site is now occupied  by Majestic Wines.


Almost nothing remains of the town as it was then. Just a few ghostly reminders here and there: an old sign, painted high on a wall, advertising a shop which has long gone. 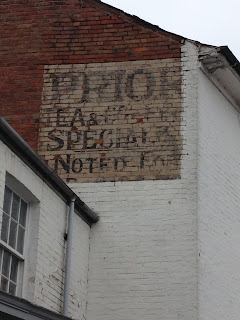 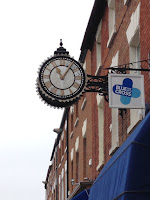 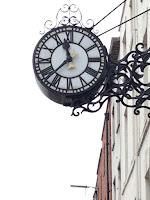 Above street level, clocks mark the site of watchmakers' or jewellers' shops that are no longer there. A reminder of the passage of time, of how everything changes.


There is one shop that defies the age, that refuses to change.

F. Hazell Smith, The Spot for Value, Gentlemen's Outfitters, established over 85 years. Even the paper bags are the same. 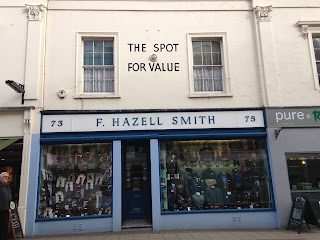 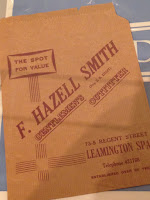 Shops like F. Hazell Smith are survivals from a relatively recent past which disappeared suddenly and almost completely, like a retail die off. It is good to see a shop of the old fashioned kind, not as a museum exhibit but open for business in the middle of the town.

Oh gosh - I remember the Toytown in Ayr when I was a child. The building has been empty since it closed. Sadly that's the case with many shops in my home town. We've recently lost our 'real' cobblers - a man called Blainey Quinn who was in his 90s and had a tiny shop down a little alleyway. And I can remember going with my mother to buy my startrite sandals from Mr Cuthbert, who had a dark shop with green leather, brass-tacked chairs and everything stored away in tissue paper and cardboard boxes. The only shoes on view were the display models on the window. You would get your feet measured, with a miniature version of the adult device, and then Mr Cuthbert would bring down a selection of brown, black or navy shoes from the shelves. All my classmates got their shoes from Clarks and I was very jealous - I wanted magic steps shoes too! However, now I'm quite glad that I have lovely memories of hiding behind the chairs (while my mother was paying) and pulling out mysterious boxes to discover the shoes within.

Amazing how this kind of exhibition can spark such sharp and detailed memories, Becca. Sad but inevitable, Leslie. That world has gone and won't come back again so it's important that we keep the memories alive.