'Help, there's a fly in my Chalice' by Karen Maitland

For centuries educators have wrestled with the problem of how to encourage someone who has little interest in studying to sit down and read a book, much less learn its contents. Back in the 14th century the Church was having the same difficulty with their clergy. Many men became priests for all kinds of reasons. It was an easy way to earn a living compared to many occupations in the Middle Ages. It offered an ambitious man the chance to rise in the world, and becoming a priest had the added advantage that if you committed a crime you could claim Benefit of Clergy and be tried in the more lenient Church court. A spiritual calling was not usually the main reason most medieval men entered the priesthood.

The result was that some parish priests spent little time serving their flock and far more in gambling, drinking, hunting and wenching. They were even involved in nefarious activities such as dealing in stolen goods and coin clipping. Many priests only had a vague idea of how to conduct services, baptise babies or ask the right questions in confessions and relied on their memories of having seen others do it. There were so many complaints about priests’ behaviour and their neglect of their parishioners, that in the Fourth Lateran Council in 1215, strict obligations were laid down to try to set a standard for conducting services and carrying out parish duties.

A number of instruction manuals were commissioned detailing everything a parish priest needed to know from saying Mass to shriving the dying. One such manual was written by William of Pagula, but since it was written in Latin it was fine for university scholars, but no help to the majority of parish clergy who barely understood the Latin words of the mass they gabbled from memory. The Bishop of Exeter ordered all of his parish clergy, on pain of a hefty fine, to buy one of these many instruction manuals and to learn it. The trouble was that even those who were literate couldn’t be bothered to read these dry tomes, much less learn them by heart. 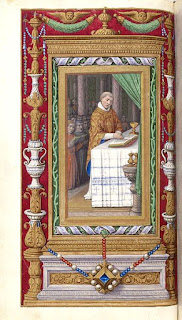 In the 14th century, John Myrc, a canon regular in one the Augustinian orders, decided that a different approach was needed. He recognised that what people enjoyed were poems, so he wrote his own manual for parish priests, but instead of using formal ecclesiastical language, he wrote the whole thing in the common vernacular and in verse, because he realised that a piece that rhymes is much easier to memorise than straight prose.

"Thus thow moste also ofte preche
And thy paresche yerne teche
Whenne on hath done a synne
Loke he lye not longe there-ynne
But anon that he schryue
Be hyt husbande, be hyt wyue
Leste he forget by lentenes day
And oute of mynde hyt go away."

"Thus you must also often preach,
And your parishioners you must teach
When anyone has committed a sin
Look that he lies not long there-in
But at once that he him confess
Be it husband, be it wife
In case he forgets by lentenes (Eastertide) Day
And out of mind it goes away." 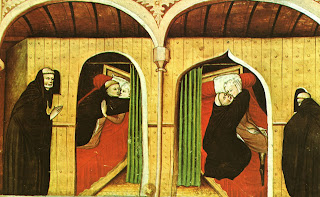 I often go back to read Myrc's ingenious manual, not simply because it gives a useful insight into the way an ordinary 14th century parish priest would shrive a dying man or question a sinner, but for the wonderful glimpses it gives into medieval behaviour through his instructions on what not to do.

Myrc firmly instructed priests that they must abstain from wresting, hawking, hunting and dancing. They should not wear slashed clothes and piked (exaggeratedly pointed) shoes, or wear a dagger. If the priest finds himself so drunk that their ‘tonge wole not serue the’ (your tongue will not serve you) then he sternly warns on no account should that priest attempt to baptise a baby. Clearly it was not unknown for a priest to be drunk in charge of a squirming infant, with disastrous consequences not least for its future name, though naturally Myrc is more concerned that the priest might fluff his lines and in consequence the baby might not properly baptised.

John Myrc had a great understanding of human nature. He cautions the priest against imposing a penance which is so heavy it will cause resentment and may lead to greater sin. Better, he says, to send a man to purgatory through light penance, than hell through a heavy one. Likewise, he advises the priest to allow a wife or husband to do private penance for a sin the other doesn't know about rather than risk a marriage breakup by making it public.

But Myrc, having once served as a parish priest himself, is always human enough to realise that things can go wrong and instructs the priests on what to do if his mind is so ‘wylde’ that he realises he’s forgotten the wine or bread halfway through the middle of saying Mass. 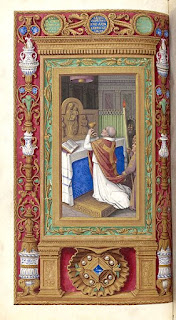 He also advises that if a fly, gnat or spider should fall into the chalice, he should, if possible, swallow the wine plus insect. But if the priest knows he won’t be able to do it without vomiting, he must fish the insect out, wash the wine off it back into the chalice and burn the bug. Presumably you sometimes had to wash the wine off the odd stray mouse too. Advice that reminds the modern reader of the perils of working in a thatched church in those days.

For anyone interested in reading Myrc’s work with a modern translation ‘How thow schalt thy paresche preche. John Myrc’s Instructions for Parish Priests,’ by Geoffrey F.Bryant and Vivien M.Hunter, has both a transcript of the original plus translation and notes.

Sounds like a great way to get those lazy priests to learn what they had to. Did it work?

Did it work? - Ah, there's the question! I imagine it was used to steady table legs in many a priest's house.
Wonderful blog - thank you!