"The Family of Man" - Exhibition and Book - Joan Lennon

I went to the exhibition The Family of Man in the early 1960s, when it was on its travels around the world (37 countries on 6 continents, over 8 years), and it had a deep effect on me.  My dad bought the book and I re-discover it - tatty and well-thumbed - on my own shelves from time to time, and am moved all over again. 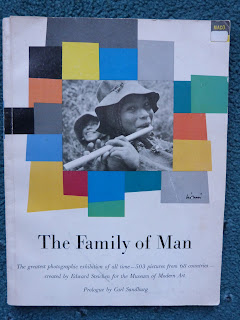 The book can't recreate the experience of the exhibition itself, which was like nothing I'd ever seen before.  "Enlarged, often mural scale images, angled, floated or curved, some even displayed on the ceiling, were grouped together according to diverse themes." (Wikipedia)  I remember being drawn hither and yon, desperate not to miss anything. 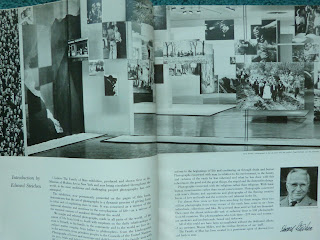 The poet Carl Sandburg wrote the introduction, including, in his unashamedly lush language, these words:

"If the human face is "the masterpiece of God" it is here then in a thousand fateful registrations. Often the faces speak that words can never say. Some tell of eternity and others only the latest tattings. Child faces of blossom smiles or mouths of hunger are followed by homely faces of majesty carved and worn by love, prayer and hope, along with others light and carefree as thistledown in a late summer wing. Faces have land and sea on them, faces honest as the morning sun flooding a clean kitchen with light, faces crooked and lost and wondering where to go this afternoon or tomorrow morning. Faces in crowds, laughing and windblown leaf faces, profiles in an instant of agony, mouths in a dumbshow mockery lacking speech, faces of music in gay song or a twist of pain, a hate ready to kill, or calm and ready-for-death faces. Some of them are worth a long look now and deep contemplation later."

There's a certain oddness in taking photos of photos in a book of an exhibition, but if you're too young to have seen it back in the day, then maybe I can convince you with some of the images below to buy the book or, as I was delighted to discover, you can see the exhibition, displayed as it was originally designed, in Luxembourg, at Clervaux Castle.  Either way, you won't be disappointed. 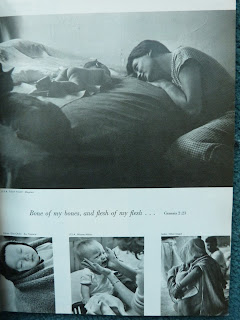 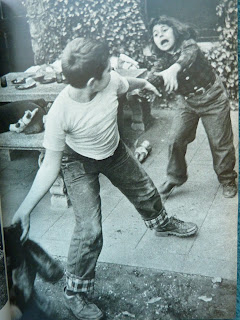 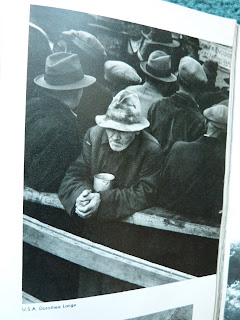 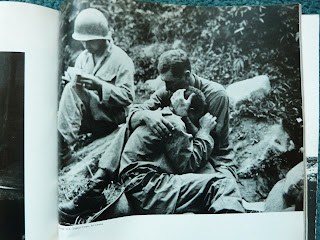 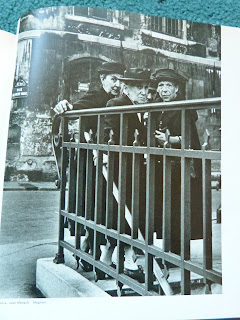 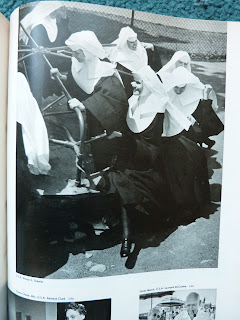 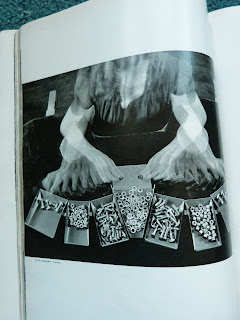 Had never heard of this before - it looks amazing. I have seen that first image reproduced somewhere - I remember using it as a prompt for some writing.

The exhibition was held well before DNA analysis told us that we're all, every since one of us, the children of African Eve. I wonder if that would change anything?

So has the exhibition been in Luxembourg ever since the original tour or has it recently been recreated? Prompted to look up Dorothea Lange's dustbowl migrant mother image, I discovered that she didn't just exhibit in the show, but recruited other photographers. Thanks for this. I will look for the book.

I hadn't realised this, but "The Family of Man" has been in Luxembourg since 1994 - and the exhibition was registered as a UNESCO world heritage site in 2003.
It's of its time, of course, and it's impossible to do the range of photos justice in a short post, but as an entity it was/is a powerful experience.

Oh, how amazing to see those photographs again! I remember going to this exhibition with my parents at the Festival Hall in London - but it must have been before the early 60s because I'd left school by then. I'd have said about 1957/58 - is that possible? My dad also bought the book, and over the years I looked again and again at the photographs - they made a huge impression on me. I suspect the book was thrown out when my parents were older and moved house, but if it's available I must get a copy. Thank you for this post, Joan.

I'm so glad you saw it too, Ann - it was first shown at the Museum of Modern Art in New York in 1955 and then went on the road, so your dates are completely possible. And you can definitely still get the book.