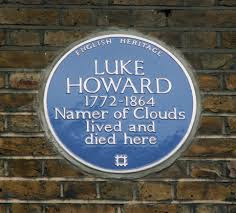 This plaque is on a house in Tottenham, North London. Tottenham does not have a good rep. It's all football and riots. But Tottenham was once a  country vilage on the edge of town, and Bruce Grove, where this house, a good London brick Georgian semi detached house stands, was a premier street. It leads to Bruce Castle, a handsome 16th century mansion on lands once owned by the House of Bruce - Scots royalty no less.

I would pass this house with it's blue plaque sometimes, l and I would sit in traffic and wonder about Luke Howard and his beautiful house, It was empty then, but had a roof and the walls were all sound.


The first time I saw the blue plaque I thought it was a prank, an art installation maybe. But I looked him up and Luke Howard was everything the plaque said he was and more. Son of Quakers, he was an industrialist and scientist who studied the weather, and named the clouds with the words we still use today, cirrus, nimbus, cumulus.  He was elected a member of the Royal Society in 1821 and published many books on meteorology and the weather.

But the house now is completely derelict. It's owned by developers who bought it two years ago and are waiting for the shell of a once lovely house to fall down so  rather than work with the building  to make it into modern dwellings. they can build as many modern mean windowed flats as possible, and maximise profits.

There's a campaign to save it, here  https://you.38degrees.org.uk/petitions/save-7-bruce-grove-tottenham
London needs flats of course, but it needs its history too.

Posted by Catherine Johnson at 07:29

Surely it can have both with redevelopment rather than destruction - there should be laws against this!!!

'The namer of clouds' - what a wonderful accolade!

Signed and tweeted...I thought I'd already signed something, but maybe it was to get the blue plaque listing in the first place. Highly recommend Richard Hamblyn's book about Howard.

Although it would be quite fitting if the house had no roof... There's an app called CloudSpotter and every time you identify a cloud, you help NASA.

P.S. I loved this piece!