My latest novel Watch the Lady is about a celebrated Elizabethan muse. Lady Rich was the inspiration behind Sir Philip Sidney's groundbreaking sonnet cycle Astrophel and Stella, a heartrending account of Sidney's adoration, longing and bitter jealousy for a woman who slipped through his fingers and was married to another man.

We tend to think of the artist's muse as a passive symbol but when I began to look into the life of Lady Rich I discovered this was far from the case. I was drawn to consider the role of the literary muse in a more general way finding that muses come in all forms all inspiring in completely unique ways. Here are some of my favourites:


Renaissance poet Dante Alighieri was utterly captivated by a girl named Beatrice when he met her aged only nine and she eight. Though he only encountered her one further time and she was married to another, he tirelessly wrote poetry in praise of her, which collected together became La Vita Nuova a work that would form the paradigm for love poetry for centuries. Beatrice’s role as the pure object of an unrequited yet transcendent love conformed to the expectations of the courtly love tradition. Her early death, aged twenty-four only increased her power to inspire Dante and she appeared in his masterpiece, The Divine Comedy as his heavenly guide.

LADY RICH
Penelope Devereux was forced to marry the fantastically wealthy and aptly named Lord Rich as a
means to replenish the coffers of her noble but impoverished family. Prior to her marriage she had caught the eye of the man to whom she had been betrothed as a child, the soldier and poet Sir Philip Sidney. Sidney wrote Astrophel and Stella, a sequence of sonnets and songs telling of his profound devastation and jealousy provoked by her marriage to Rich. Though Penelope was disguised as Stella in the poems, Sidney made frequent plays on the word ‘rich’ which made her identity easily decoded, suggesting that his love for her was common knowledge in the court circles where the poems would have been circulated. Astrophel and Stella was only published after Sidney’s tragic early death on the battlefield.


THE DARK LADY AND THE FAIR YOUTH
Shakespeare’s sonnet sequence subverted convention, as it was inspired by more than one muse. Indeed, many of the poems are addressed to a ‘fair youth’, described as the poet’s ‘master mistress,’ giving rise to a belief that he might have been homosexual. Other poems in the sequence, though, praise a dark lady, whose features were entirely at odds with contemporary notions of beauty. The identity of the bard’s muses has remained a mystery and puzzled Shakespeare scholars for centuries.

Romantic poet Keats was struck by the sixteen-year-old Fanny Brawne, describing her in a letter to his brother as a, ‘minx.’ But he was soon deeply enamoured with her, as his biographer Richardson put it, she became, ‘the reconciliation between real life and his poetic quest.’ During the time they were betrothed Keats was at his most prolific but he was to contract consumption and die in Italy before they were ever able to marry.

French poet Charles Beaudelaire met the mixed race Jeanne Duval in 1842 and they spent two turbulent decades as lovers. He called her his ‘Venus Noire’ and dedicated many poems to her dangerous beauty, depicting himself as entrapped and helpless in his love for her, as in these lines from Le Balcon: The night was growing dense like an encircling wall,/My eyes in the darkness felt the fire of your gaze/And I drank in your breath, O sweetness, O poison!

Virginia Woolf’s gender morphing hero/heroine Orlando was inspired by Vita Sackville West, a woman with whom she had a long love affair and a longer friendship. Woolf was fascinated by Sackville West’s aristocratic heritage as she wrote in her diary, ‘I trace her passions – 500 years back, and they become romantic to me, like old yellow wine.’ With Orlando Woolf sought to address the injustice of Sackville West’s gender, which barred her from inheriting of her beloved ancestral home, Knole, that went to a male cousin.

Zelda was the emblem of the Jazz Age and was described by her author husband, F Scott Fitzgerald, as ‘the first American flapper.’ He was utterly captivated by her wild spirit but their heavy drinking and mad partying took a terrible toll on Zelda and she ended up in an asylum. Zelda was also an author but never found a way to emerge from her husband’s shadow. Elements of Zelda can be found in many of the women of Fitzgerald’s novels but it is Nicole Diver, the tragic heroine of Tender is the Night who most greatly and poignantly embodies her. 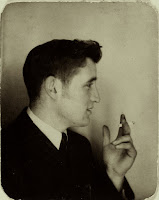 Neal Cassady grew up in the slums of Denver but was determined to make something of himself and though he lacked education he had a soaring intellect and made a profound impression on the young author Jack Kerouac. Neal became the inspiration for both Dean Moriarty in Beat Generation bible On the Road and Cody Pomeray in Kerouac’s later work and is credited with helping the author develop the spontaneous style that made his voice so original.

Elizabeth Fremantle's novel Watch the Lady is published by Penguin

Fascinating post, Elizabeth. Penelope Rich was a very forceful, not to say scandalous woman - I am looking forward to reading 'Watch the Lady' to see what you do with her.