On The Trail of Cleopatra: Part 2 by Lucy Coats

Today, the tenth day of our our Shakespeare month, we welcome a return visitor, Lucy Coats. She talks here about the research she did for the second of the novels she has written about "The serpent of old Nile." What would Shakespeare have made of the youth of his fascinating Egyptian queen? We like to think he would have relished it. Welcome, Lucy!

In my last post for The History Girls, I talked about the importance of research. For the second of my two Cleopatra novels, CHOSEN, it was even more vital for me to get it as right as I could – and in some ways even harder to do so. The research I had to do for the first book took me to the depths of ancient Alexandria (almost literally), and to Philäe. This time my Cleo had a longer journey, to Crocodilopolis in the Fayum, across the White Desert and back and then on to Rome. The challenges of portraying such a wide-ranging panorama of settings in an authentic way without information overkill were considerable.


Luckily for me, there was quite a lot of information available about Crocodilopolis (now Medinet al Fayum) and its deities, Sobek and his snake wife Renenutet. I also discovered that it housed a physical representation of Sobek in the form of the holy Petsuchos, a living crocodile draped in gems and gold. How could I resist including him?

'Right in the middle, there lay a behemoth of a crocodile, its armoured coat shimmering with jewels, its claws painted gold...'

For the trip across the desert, I pored over maps, watched endless camel-riding videos, and travel documentaries on ancient tribespeople, as well as seeking out technical advice on what to do in the event of being caught in a sandstorm (THE WORST-CASE SCENARIO SURVIVAL HANDBOOK provided the answer). The crucial figures were how far a camel could travel in a day – and the distances between oases. I could now probably find my way blindfold round the Oasis of Siwa (known then as the Oasis of the Oracle).

My greatest challenge, however, was Rome. While there is, of course, a whole canon of literature on life and times in the Ancient Rome of Pompey, Caesar and Marcus Antonius, what I needed was more specific. I needed to know exactly where the consul Gnaeus Pompeius Magnus (aka Pompey the Great) lived in Rome in 56BCE. The evidence I found from writing of the time told me that Cleo’s father, Ptolemy Auletes, had been given the villa next door to live in during his exile – and that’s where Cleo needed to get to. I could have made it up, of course, but my inner historian would not let me get away with the easy path. Although I could not go to Egypt (because it was too dangerous to visit the places I needed to see), I could and did visit the seven-hilled city. I had lived there in the late 1970s, but hadn’t been back since, and there was a lot I’d forgotten. So, armed with comfortable shoes and maps, I trudged up and down, feeling the stones of Rome under my feet, and also standing on top of the Tarpeian Rock (which I needed for a dramatic assassination attempt). There is a wonderful resource called Digital Augustan Rome which helped pinpoint the exact spot (NOT where the DK Guide has it, by the way). I stood looking down towards the Forum, and imagined Cleo’s wretched little sister, Arsinoë, attempting to push her over. A true vindictive Ptolemy, that one, from all accounts – I can’t blame Cleopatra for having her murdered in 41BCE.

But where was Gnaeus Pompeius Magnus’s residence to be found? For that I had to play geographical detective and reconstruct clues from another source – Samuel Ball Platner and Thomas Ashby’s truly heroic work, A Topographical Dictionary of Ancient Rome. Pompey’s house was not at all easy to track down – but because I knew who and what I was looking for, eventually I pinpointed him to the Valley of the Suburra, near the temple of Tellus, on the Esquiline.. I even found out that his house was decorated with the prows of the pirate ships he had defeated in 68BCE after they had attacked the port of Ostia.The next year he moved to a much grander house near to the Theatre of Pompey. I am probably a sad geek, but that was one of the most satisfying pieces of research I’ve ever done – there is nothing to beat feet on the ground, smelling the air, and seeing the flora and fauna, which don’t change much. There are still Pinoli trees and seagulls in Rome.

Did Cleopatra actually go to Rome before her time with Julius Caesar? There is a small amount of evidence to suggest that Pompey and Caesar certainly knew her as a girl – and speculation that she went to fetch her father back at the end of his exile. We simply don’t know, and never will – but holes in history are for filling, in my opinion – and I hope the way I tell this part of my Cleo’s story is at least plausible.

I’m sad to leave Cleopatra behind – but I’ve got her to the throne now, and she’s walked off into the history books. Her story from now on is one where other people have trodden a well-worn path. It’s time for me to bow out and leave her to her glory.

'Thou shalt be as mighty, divine stars in the land, and thy diadem shall shine forth as the rays of Ra.' From The Book of the Dead 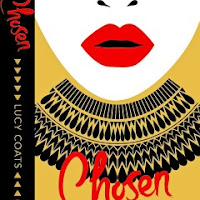 Thanks, Lucy, for taking Michelle Lovric's spot to write about Cleopatra, the camels, the crocodiles and the possible journey to Rome. The book certainly enabled you to write about a Marcus Antonius!

Goodness, how did they manage to decorate that crocodile without being snapped in half? Maybe a sleeping drug? Poor thing, waking up to find stuff hanging all over it...

You are a researcher and a half! Not all of us can travel for our research - I certainly can't - but I think if you couldn't have managed Rome you would have found your information somehow, as you did for the rest. The Internet has made things a lot easier for us all. I must check out some of those resources you mention. Thanks for sharing!

That's fascinating
I'm curious about the crocodile, too. Maybe they started decorating the croc when it was small? Or fed it a huge meal and did it while it was sleepy and digesting, afterwards.) Not, I think, an area for practical research!