I come from a family of rivalrous, competitive siblings. So I was horribly fascinated by the tomb I found at Southwark Cathedral. This is where Edmund, youngest of the Shakespeare brothers, who was an actor in Southwark, was buried when a bout of plague in 1607 took him off, aged 27. You'll see why I was struck as soon you take a closer look at the picture of the tomb below. 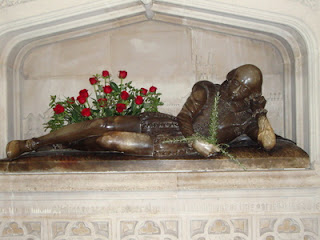 Yes ... The image on the memorial statue, and also on the stained-glass window above it, is not that of Edmund Shakespeare at all, local boy though he was - but of his more famous big brother. Picture the horror of that - if, even in death, you couldn't get your own memorial to yourself but had to continue a jealous-sibling seethe through all eternity. I can so easily imagine the rage, the turning in the grave. 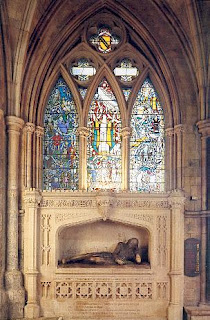 Sibling rivalry is a bit of a theme in (William) Shakespeare's plays. King Lear provokes rivalry among his three daughters by asking them to describe their love for him; Cordelia, our heroine, is much more bashful than her scheming sisters Goneril and Regan about singing her father's praises, with unfortunate consequences. In the same play, Edmund contrives to force his half-brother Edgar into exile. In The Taming of the Shrew, sisters Kate and Bianca are shown fighting bitterly. In As You Like It, there is obvious sibling rivalry and antagonism between Orlando and Oliver, and also between Duke Frederick and Duke Senior. And, in Richard III, the bitter, twisted, evil, hunchbacked title character is at least partly motivated by rivalry with his handsome blond elder brother, King Edward.

I think this proves not only that William knew a thing or two about sibling rivalry, but also that it strongly suggests he learned what he knew back home in Stratford with his annoying younger brothers and sisters. Possibly even mostly with the baby of the family, the coddled mummy's darling.

So just to even things up, today I'm going to tell you the story of Edmund, the last of the Shakespeare siblings. His mother Mary gave birth to her eighth child in 1580 when she was forty years old and her husband John (a wool and corn trader, and a glover, with a sideline in money-lending) was forty-nine. They christened the baby on May 3. Though their family fortunes were in decline, Edmund had four, healthy, living siblings; William, aged 16, Gilbert, aged 14, Joan, aged 11 and Richard, aged 6.

As the youngest of the family, it is easy to deduce that Edmund is quite likely to have been spoiled. Due to the poor state of the family fortunes, he also probably didn't get much of an education. He must have idolised (but perhaps also horribly envied) his eldest brother, William, and been attracted by the stories told by his brother and of the colourful life in the theatres of London. When Edmund turned 16, his family's finances improved - but his parents were getting old, Stratford was not sophisticated, and Edmund headed straight for the bright lights of London to set up as an actor, in emulation of (or competition with) his theatrical brother.

William, 16 years older, may have helped the youngest Shakespeare. Edmund may have appeared in some of William's plays. We do not know. Edmund did not become a famous actor, though; and he was only 27 when he died (possibly of the plague - an outbreak the following year is documented).

William would have been the one who arranged his brother's funeral and the attendance of many fellow actors. It was customary for funerals to be conducted in the afternoon, but so was it customary to show plays at that time, and the records show that Edmund's funeral was conducted in the morning (perhaps marking William's priorities, but also those of the actors present). Edmund was buried in the Southwark church then known as St. Saviour's on December 31 1607. His funeral was expensive - a sign of feeling on the part of a mourner? - and was probably financed by his brother. Tolling bells were heard across the Thames. It is not known whether any other members of the family, including his brothers and sisters, were present at the burial.

At first, on finding out all this, there was no limit to my sympathy for the poor younger brother, striving so hard, yet forgotten by history. It felt easy to make William the bad-guy sibling in my mental picture of their relationship - a man exasperated by the squeaking wannabe bobbing along in his wake, and lavishing money on Edmund's funeral. Perhaps he felt just a tiny bit guilty at that irritation. Perhaps he was relieved to be the only Shakespeare in the London theatre again.

But I gradually realised that the stained-glass window and statue that tourists and worshippers can see today in Southwark Cathedral's South Aisle were not the mark of an ego-maniacal elder brother stamping out every last trace of his younger competitor.

Edmund wouldn't have turned in his grave at being commemorated by a statue of his brother for a good few centuries after being buried, either. The recumbent alabaster figure of William Shakespeare turns out to be modern, a 20th-century addition. It was carved by Henry McCarthy only in 1912, seven years after St Saviour's had been given cathedral status and was being upgraded with an elaborate programme of Edwardian improvements.

And there is still a trace of Edmund in the Cathedral, though you do have to look pretty hard to find it. Although the position of his grave is unknown, he is commemorated by an inscribed stone in the paving of the Choir.

Thanks for sharing this story! It can't be easy to be the unknown sibling of a celebrity, or, anyway, a highly successful person. "Oh, are you related to William Shakespeare? Wow! Does he show you his plays before they're performed? I really liked Hamlet, tell him I have a great idea for a tragedy..."

And sad for his family and friends to have to go back to work after the funeral. Imagine trying to perform a comedy after that.

Thanks for this, Vanora!

Enjoyable story. I liked learning about the sibling rivalry in the plays. I will be reading The Taming of the Shrew soon in preparation for reviewing Anne Tyler's upcoming retelling, The Vinegar Girl.

Hm. I'm not sure I agree with you about sibling rivalry. I notice that in all the examples you give, the sibs are of the same sex. I am the only girl - with three brothers - and I suspect that that makes a difference. We have managed to grow up supportive of each other (on the whole). It's much easier to be non-rivals if you are of the opposite sex to your sibs. You are not treading on their patch, as it were.