Shakespeare and Children by Miranda Miller 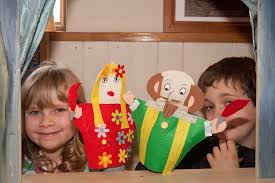 I’m about to become a grandmother and I’ve been wondering how to pass on my enthusiasms. A long time before the dreary experience of ‘doing’ Shakespeare at school (reading the plays around the class), I was lucky enough to be introduced to him in other ways. As a stagestruck child, when I was about ten I went to drama classes where I had to learn speeches from The Tempest and Midsummer Night’s Dream. I was fat and looked and felt more like Caliban than Puck; no self respecting fairy bower would have had me in it. Did I understand all the words? Probably not, but their richness and rhythms gave me enormous pleasure and I can still remember chunks of the speeches I learned then. In the 60s I saw a lot of wonderful RSC productions, most memorably Vanessa Redgrave in As You Like It, David Warner’s Hamlet and John Barton’s extraordinary rewriting of the history plays, The Wars of the Roses. In my early teens I was taught by a brilliant woman, Mavis Walker, and learned speeches of Rosalind, Viola, Olivia, Juliet, Cleopatra, Ophelia and Imogen. After my rather wooden performances we would sit down and discuss the psychology of these women and the themes of the plays. My dramatic career reached its heights when I played Romeo in the school play but I was left with a rich sense of the life of these plays and the people who inhabit them.

So what is the right age to start enjoying Shakepeare? Ever since Charles and Mary Lamb’s Tales from Shakespeare was first published in 1807, people have been trying to simplify Shakespeare for children. They are wonderful stories and children do respond to them but what about the real thing? Cbeebies, the BBC channel for children under six, has bravely decided that you’re never too young and there is now a CBeebies interpretation of A Midsummer Night’s Dream, filmed at the Everyman Theatre in Liverpool and starring the channel’s best-known presenter, Justin Fletcher, as Bottom, and his side-kick Steve Kynman as Shakespeare. 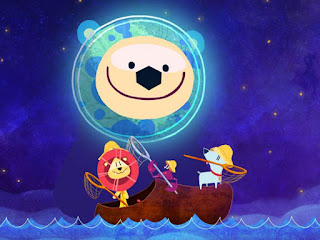 I agree with Gregory Doran, the Artistic Director of the RSC, who believes that children as young as five should be exposed to Shakespeare and argues that they aren’t put off by the complexity of the language:

“You have to let the bug bite before kids get cynical. Letting them get involved when they are 13 is much harder than getting to kids earlier, without all the prejudices and stresses and strains of the idea that Shakespeare is somehow difficult or boring or academic,” he said. “With my own experience of getting to know Shakespeare as a child, I was grabbed by the stories first of all. Then you grow up and become engaged by the language. But it’s more than just good stories and nice language. It’s about ethics and morality.”

Working with primary schools across Britain, the RSC have found that children from Key Stage 1 (aged five to seven) have been “captivated” by Shakespeare. They work with abridged versions of the plays, focusing on particular scenes, but are exposed to the original language rather than a simplified version of the text. In a recent experiment, the RSC streamed video of its production of Richard II, starring David Tennant, to more than 7,000 primary school children.

One teacher from Bolton wrote of her seven-year-old pupils: “About 20 minutes into the performance, as I looked around at all the wide-eyed little faces looking up toward the screen, I thought I was going to cry. It gave our kids the opportunity to see the RSC for the first time in their lives. As one child in Year 3 said, 'Miss, is this for real?’ ”

In 2012 Simon Schama responded to critics who claimed that Shakespeare’s plays can’t be understood by most people: “I think it’s incredibly patronising of anybody to suppose that is true of Shakespeare. I was recently on the judging panel of Shakespeare by Heart (Off By Heart Shakespeare, a recital contest for secondary school children).   “We were listening to children, all from state schools, who learned long speeches by Shakespeare. They weren’t all white, they weren’t all pink or beige, they were exactly the face of young Britain that you’d expect and had absolutely no problem with the language or meaning of the plays. They were utterly wonderful. Shakespeare isn’t scary. It shouldn’t be scary. And to suggest that schools, for example, shouldn’t teach him or should teach him less because he’s not 'accessible’ is robbing children of an incredible experience with their own language and an understanding of what it means to be human.”

Shakespeare’s Globe offers exciting educational activities for families and children all year round, including backstage tours, a Family Literary Festival, a digital playground zone and interactive films. I can’t wait 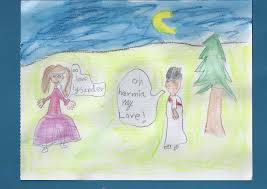 I discovered Shakespeare all by myself, at about twelve. I stumbled across my sister's old school Julius Caesar and was utterly thrilled by it. I declaimed around the house, "You rocks, you stones, you worse than senseless things..." And, of course, both Marc Antony's speech and Brutus's... And there were the wonderful Wayne And Schuster with their Rinse The Blood Off My Toga, which I heard on a record my father found somewhere.

Unfortunately school is not always the best place to discover him. Some teachers are better than others. My Year 11 teacher was wonderful - her teaching of Richard III along with a mention of Daughter Of Time got me into the Richard III Society. But the others, nice as they were, just weren't up to the task.

It's nice to know that there's so much out there for kids now.

I didn't get Shakespeare until I was taken age 14 to Stratford and had the chance to see it live by those whose love for what they did shone through and the sheer joy caught my heart and made it sing. Some of my favorite plays are ones I saw live, and I am a firm believer that seeing and experiencing the plays rather than just reading.

I can remember in primary school being incredibly jealous of the primary six group who had a drama group come and do scenes from the Tempest with them. They got to create all sorts of fantastical props, dress up, and have a performance. Unfortunately they never repeated it, but the photographs stuck on the corridor wall for years after, it seemed.

By the time I got to secondary school, we did Romeo and Juliet which was studied by reading aloud parts in class. I was one of only a few people who actually tried to put some feeling into our class readings, and got laughed at for our efforts.