'Samuel Pepys and the Goldfish' by Karen Maitland

I love delving into the diary of Samuel Pepys. He left us a wonderful record of some great historical events as they were unfolding, but for me it is his casual references to the details of everyday life, which always makes me want to find out find out more. 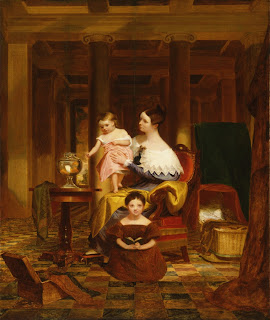 ‘Thence home to see my Lady Pen, where my wife and I were shown a fine rarity of fishes kept in a glass of water, that will live so forever, and finely marked they are, being foreign.’ Samuel Pepys, 28th May 1665


We will never know for certain what these fish were that Samuel Pepys admired, but it is likely that this is one of earliest written references to goldfish being kept in an English house.

The Ancient Romans are credited with being the first to bring fish into the home for the pleasure of their guests, keeping them in tanks made of marble. But these would have been fish such as barbels taken from rivers, rather than fish specially breed for colour and shape.

In the Middle Ages manor houses, monasteries and villages had fish ponds stocked with fish destined for the table. No doubt children got pleasure from feeding them crumbs, but even smallest child would have been aware that, like other livestock, they were there to be eaten. In manors and monasteries fish could also be seen swimming for a few days in tubs of water in the cool of the dairy until the cook was ready for them, but the concept of keeping a fish in the house that you didn’t intend to eat would have been strange to most medieval Europeans. 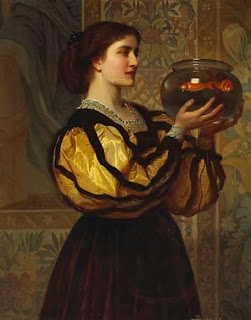 But in China goldfish were kept and breed for pleasure as early as the Sung Dynasty (960-1279AD). In 918AD a Chinese monk wrote, ‘if goldfish eat the remains of olives or soapy water they die, but a certain bark will prevent them getting lice.’ The writer Yo K’o (1173-1240) described fish breeders in Chung-tu (now Beijing) who could turn the colour of fish to gold.

By 1276 silver, black, red and multi-coloured goldfish were being produced for sale as ornamental fish and by the 14th century an entire porcelain factory in China was given over to the production of fish bowls. Martin Martini, writing between 1646-50 in Hangchow, became fascinated by the ‘little gilded fish’ called Chin-yü. ‘The skin glitters,’ he tells us, ‘being interwoven with threads of gold. The whole back sprinkled as it were with gold dust.’ 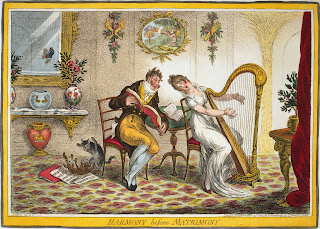 If it was goldfish Samuel Pepys saw in the ‘glass of water’ it is likely they came into England via Portuguese traders, who were the first Europeans to bring them on ships from China sometime after 1611. But after the East India Company established a trading base in China in 1672, the British eventually began to import these fish directly from China. One such ship arrived in England with live goldfish among its cargo early in the year 1692, having left Macao in China in September the previous year. Considering Louis le Comte on a visit to China in 1696 had described these finger-length fish as highly delicate and susceptible to injury, it was amazing they survived such a rough journey, not to mention the changes in temperature, and their water can't have been replaced very often on such a long voyage.

By 1711 the Duke of Richmond boasted of owning a large Chinese earthenware bowl full of goldfish which had been imported directly from China, and Horace Walpole was so successful in breeding them in his pond, he gave goldfish away as gifts to friends, sending one man home with a dozen in a ‘decanter’. 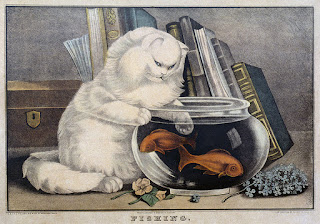 But as Horace found out, keeping goldfish wasn't an entirely hazard free hobby. In 1747 Thomas Gray penned his poem ‘Ode on the death of a favourite cat, drowned in a tub of gold fishes.' The cat in question was Horace Walpole's cat, Selima. 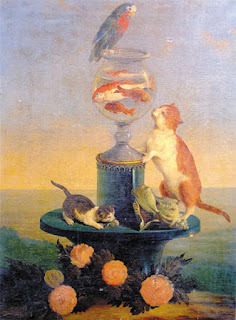 Wealthy Europeans kept goldfish in the large porcelain or earthenware bowls, as they had been kept in China, but once these fish became fashionable in England, unless you had grand entrance hall, keeping these large bowls of water on the floor of an English house wasn’t practical, so the glass goldfish bowl was introduced which could stand on a small table. Early English glass fish bowls were mounted on stems like wine glasses. The idea for these glass fish bowls may have originally come from the water-filled glass globes which were placed on tables to intensify the candlelight when someone was trying to read, write or sew.


Eventually these exotic pets became so cheap that goldfish were given to children by rag and bone men in exchange for the old clothes and other recyclables they had collected. I remember as child coming home with a live goldfish I’d won at a fair. I loved and cherished ‘Goldy’ for years, though thankfully for the sake of all those poor creatures who didn’t survive, giving away fish as prizes has now been banned. 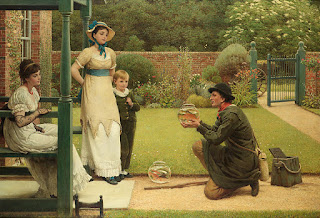 I was fine my first goldfish when I was five. My father brought them home - and he said he knew I must be REALLY sick when I didn't show enthusiasm. I'd already come home from school carried by my sister. I had rheumatic fever!

But I kept fish all through my childhood.

I enjoyed it too. My father told me that when he was a boy, a rag-and-bone man came round, offering a goldfish in return for 'rags.' My father, who was about six, went into the house and brought out a pile of washing, handed it over and got his goldfish.
When his mother came home from work, she asked how he'd come by the fish. He told her, quite happily.
The next time that rag-and-bone man came round, my grandmother was waiting for him. She was not a woman you wanted to annoy. My father had given him - and he had accepted - my grandmother's best Irish Linen sheets, which she had worked and saved for. She got the money back.

Sorry to hear you had rheumatic fever, Sue B. That is a horrible illness.

I love the story about the sheets. I can just picture your grandmother waiting, arms folded. Brilliant.

Sorry you were so ill, Sue. What a lovely sister to carry you home. Glad the goldfish survived.