It's Shakespeare month on The History Girls but every month is Shakespeare month for me, as my most recent novels are set in and around his world. He even makes an appearance in my novel Watch the Lady. His language has been a rich source of inspiration for me and he is credited with coining a vast number of words and phrases that are still in common use. Here are some of my favourites.

1. WEARING YOUR HEART ON YOUR SLEEVE
This has come to mean being emotionally open but in fact Iago, one of Shakespeare’s most duplicitous characters, said it in Othello. When he says ‘I will wear my heart upon my sleeve,’ he means that he will appear to reveal his true feelings.

2. A PIECE OF WORK
Nowadays when someone is described as ‘a piece of work’ it usually suggests they are spoiled and difficult but the meaning has changed over the years. When Hamlet says ‘what a piece of work is man! How noble in reason, how infinite in faculty!’ he’s musing on the complexities of God’s creation and the irony that all man amounts to in the end is dust.

3. A LAUGHING STOCK
Meaning to be the object of ridicule, Shakespeare coined the term in a comic exchange between Sir Hugh Evans and Caius in The Merry Wives of Windsor. Its meaning has remained the same to this day. 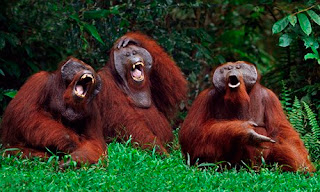 4. BATED BREATH
This comes from The Merchant of Venice. Bated is a short form of abated, so the term means talking with in a subdued manner, or holding back one's words. When Shylock says to Antonio, ‘Shall I bend low and in a bondman’s key,/with bated breath and whispering humbleness,/Say this:’ he is asking why he should stoop to those who have ill treated him.

6. VANISH INTO THIN AIR
A very familiar phrase, meaning to disappear, that was not quite coined by Shakespeare, though in Othello we can find the phrase ‘Go vanish into air, away!’ and in The Tempest, ‘we melted into air, into thin air,’ the term as a whole was not put into print until 1822. 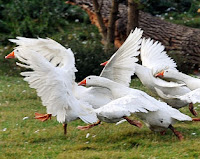 6. A WILD GOOSE CHASE
Meaning a hopeless, and often foolish, search for the unavailable, the term derives from an old game of horsemanship in which a rider made a complicated set of manoeuvres, which the other players were obliged to follow. Mercutio, in Romeo and Juliet uses it to describe a passage of quick fire banter between himself and Romeo – ‘If our wits run the wild-goose chase.’

7. TOO MUCH OF A GOOD THING
Know that feeling when you've eaten rather a lot of cake? This phrase is used often and in all innocence these days but when Shakespeare used it in As You Like It, he had an altogether more suggestive intent. It is said by Rosalind to Orlando and ‘thing’ was a common Elizabethan euphemism for genitalia – m'thinks it needs no further explanation.

8. IN A PICKLE
Meaning to be in an impossible situation, the term was said by King Alonso to the hopelessly drunk jester Trinculo in The Tempest – ‘How camest thou in this pickle.’ Trinculo had become involved in a disastrous, drunken, attempt to overthrow Prospero, thereby getting himself in a complete pickle having gone on a wild goose chase and made a laughing stock of himself.

Elizabeth Fremantle's novel WATCH THE LADY (Penguin) is out now. THE GIRL IN THE GLASS TOWER will be published on June 2nd (Michael Joseph).
Posted by Liz Fremantle at 06:00

Email ThisBlogThis!Share to TwitterShare to FacebookShare to Pinterest
Labels: a laughing stock, a wild goose chase, bated breath, Elizabeth Fremantle, in a pickle, Shakespeare, The Girl in the Glass Tower, Watch the Lady

When my children were at primary school, one of the teachers was a Shakespeare enthusiast (doing Shakespeare amateur drama productions at a local theatre and the class did a 'play' each year as part of a local schools initiative) and had two posters on the classroom wall full of Shakespeare-isms. As each of my children passed through this class, they used to come home full of these quotes and we all learned a lot about where they were first used & it encouraged us to get the various versions of the book out of the library!

A great collection! thanks.