'A Grave Story' by Karen Maitland

One night when I was child camping up on the moors on Dartmoor, I rolled out of the shelter in my sleep and woke up a few feet away to find myself lying against a grave, which I hadn’t noticed when we’d set up camp in the dark. It was a bit unnerving at the time, but I think that was the start of my fascination with gravestones and now as a writer, I often find inspiration for scenes and intriguing characters from inscriptions on graves in churchyards. But I am equally fascinated by the graves that lie on unconsecrated ground.

Near Beckhampton, in Wiltshire on the London to Bath road is a stone that marks the grave of a highwayman who was shot dead whilst trying to hold up the stagecoach. He was buried where he fell, face down. Face-down burial was common practice for the corpses of felons, not simply to punish them by giving their bodies a degrading burial, but also as a means of stopping their spirit rising from the grave to haunt the living. 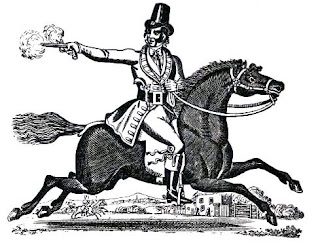 Bodies of murderers or suicides were often buried at crossroads, and the bodies spun round several times by the corpse bearers before burial so the spirits of the dead would be disorientated and wouldn’t be able to find the road back to the village. For good measure the bodies might also be sprinkled with salt or had iron nails hammered into the feet to stop the corpse walking and some were even impaled with a wooden stick to fix them in the grave.

At Cheltenham, Gloucestershire, legend has it that one such stake, took root and grew into an elm tree, though it is more likely that a seed simply fell on the dug-over soil and sprouted. Nevertheless the tree was known as Maude’s elm, because it marked the grave of a young girl who never returned after being sent from Swindon to Cheltenham by her mother to deliver skeins of wool. The following day, she was found drowned in river, while on the bridge above lay the body of her uncle, Godfrey Bowen, a man with a wicked reputation. He was found shot through the heart by an arrow and died still clutching a piece of cloth ripped from Maude’s dress. The coroner decided Maude had committed suicide, so the unfortunate girl was buried at the crossroads. Many years later, in 1778, it was revealed that a man called Walter, a skilled archer, had shot the uncle when he saw him molesting the girl Walter secretly loved on the bridge. Maude had tried to flee, but had slipped, hit her head and drowned.

﻿
Another tragic story lies behind a granite stone on Dartmoor at point where a road and track cross. It is known as Jay’s grave. Around 1790, a baby was delivered to the workhouse at Newton Abbot. She was given the name Mary Jay, an unkind name for ‘Jay’ meant prostitute. Once she was old enough to work she was sent as apprentice to Canna farm near Manaton. They called her ‘Kitty.’

But the farmer and his wife dismissed her when they discovered that she was pregnant, probably by their own son. Rather than return to the workhouse, she hanged herself in one of the barns at Canna. As a suicide, she was buried on the moors not far from Hound Tor Inn. But the strange thing is for over two hundred years fresh flowers or greenery have regularly appeared on her grave. Many people have kept watch, but no one ever sees who leaves them.

Flowers were also left on that highway man’s grave in Beckhampton, Wiltshire too, by travellers on their way to Tan Hill Fair, because they maintained he was an innocent man shot by the coach guards who thought they were being held up when he was simply trying to control his horse.

But not every burial in unconsecrated ground is a tragic story. Samuel Johnson, known as ‘Maggoty’ because of his pockmarked face was professional jester, singer and playwright born in 1691. When he died, aged 82, he was initially buried in the churchyard, but his friends had him removed as he had requested and reburied in woods, now known as Maggoty Johnson’s Woods, near Gawsworth, Cheshire. He had asked not to be left in the churchyard, because he particularly disliked a quarrelsome old woman who was buried there, and joked that on the Day of Resurrection she would pick a fight over his leg bones, claiming them to be hers. So he wanted to be buried safely away from her, so she couldn’t snatch them. 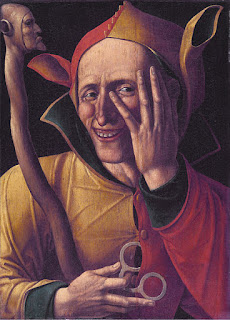 Thanks for sharing these fascinating stories! And, you know, any one of them might be the start of a piece of fiction.

I'm also fascinated and frequent grave yards whenever I find them. There are several here in Manhattan and many in Massachusetts. The one obvious one, the famous "Greenwood" for some reason I've never taken the subway out to see it. Meanwhile, not much can match the wonderful examples you shared here. Delicious.