I’ve seen Bosch’s paintings in Vienna and Venice and have always found him a fascinating and mysterious figure, so when I heard that his birthplace in Holland was celebrating the 500th anniversary of his death with an exhibition I immediately booked. Just as well, because by the end of March the exhibition was completely sold out. The man who has been said to have had “the wildest imagination in the history of art” has a lot of devoted admirers all over the world and, as Jonathan Jones wrote in The Guardian, “The Noordbrabants Museum has put on one of the most important exhibitions of our century.”

The exhibition itself is a remarkable achievement. Nine years ago Charles de Mooij, the director of this small museum in ’s-Hertogenbosch (also known as Den Bosch), decided to borrow every work by Bosch in the world. Amazingly, he managed to assemble twenty of the twenty-five surviving panels, including several reunited triptychs and panels that were scattered centuries ago, and nineteen of his twenty drawings. Most of Bosch’s work has disappeared and it would have included stained-glass windows, embroidery and glasswork. This exhibition, which has now moved to the Prado, will probably never be seen in one place again. Many of these paintings could only travel because the Getty Foundation paid for conservation work and also for a huge research project into Bosch. The Louvre in Paris, the Prado in Madrid, the Accademia in Venice, the Metropolitan in New York and the National Gallery of Art in Washington all agreed to lend their work to this provincial museum.

Before our eagerly awaited time slot we wandered around the sleepy Dutch town and visited St John’s Church, where Bosch would have worshipped and where his funeral took place although his body seems to have been lost, as the lady in the church shop apologetically told me. We know almost nothing about the life of Hieronymus Bosch, whose real name was Jeroen Van Aken. His grandfather, uncles and father were all painters in this provincial Brabant city, which was prosperous in the fifteenth century, and Bosch seems to have lived there all his life. He married, had a big house and studio on the market square and was a “sworn brother” of the local chapter of the Brotherhood of Our Lady, a religious confraternity. However conventional his outer life was it is clear that he had an extraordinary inner life and we are fortunate to be allowed to glimpse it.

I loved this exhibition, which is imaginatively displayed. His paintings are cinematic and the dark galleries are dramatically lit, with spots on each work and monitors which display high resolution images of the unfolding details of certain paintings; the seething, crazy, wonderful details. All fantasy comes from somewhere and when you look closely you see that all these monsters and bizarre inventions are based on images in our everyday world: owls, fish, lizards, trumpets, knives, funnels, all beautifully observed and drawn and then brilliantly reinvented. Somehow all these impossible figments convince us of their own reality. You feel that he lived in terrifying times (like us, like everyone,) and felt infinite compassion for the ingenious cruelties people inflict on each other. Here is his Ship of Fools, from the Louvre.

This illustrates a popular fifteenth century book with the same name: “Who takes his place on the ship of fools sails laughing and singing to hell.” It hangs directly above another panel , Gluttony and Lust, from Yale. These can now be confirmed as two halves of the same continuous vertical composition, reunited here for the first time in centuries.

This mix of the extraordinary and the mundane appears even more original when you compare Bosch’s work with that by members of his workshop. Whereas Bosch’s monsters are authentically horrible and frightening, those of his followers look merely kitsch. He was one of the first artists in the low countries to sign his work, so he wanted to be remembered. Here he is above his own signature, making fun of himself as a monster that is also a self portrait: an ascetic, gaunt, bespectacled man with the legs of a lizard and the wings of a bird. 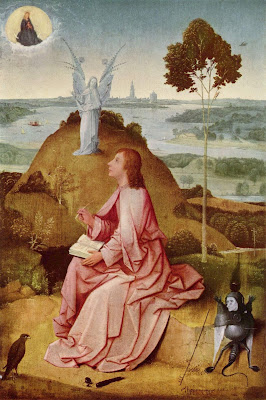 Even when he paints familiar religious scenes Bosch adds details which bring the hackneyed images to life. For example, in this small oak panel of Christ as a baby he imagines Jesus as a baby pushing along a fifteenth century walking frame and carrying a toy windmill in his right hand:

However, recent scholars have come to view Bosch's vision as less fantastic, and think his art reflects the orthodox religious belief systems of his age. His depictions of sinful humanity and conceptions of Heaven and Hell are now seen as consistent with those of late medieval didactic literature and sermons. According to Dirk Bax, Bosch's paintings often represent visual translations of verbal metaphors and puns drawn from both biblical and folkloric sources. He may have been part of the Modern Devotion movement, which wanted to bring Christianity closer to the people by making Christian teaching accessible to all through texts in the vernacular instead of Latin, and by employing provocative images and jokes  from popular culture to reinforce the message. Their aim was to encourage a direct personal relationship between the individual and God - in 1517, a year after Bosch died, Martin Luther nailed his Ninety-Five Theses to the door of the church in Wittenberg.

Some writers see Bosch as a medieval surrealist, and this is closer to my own view. As it says in the catalogue, Visions of Genius, “Bosch makes art personal, on different levels, and that makes him modern.” His private thoughts emerge in his drawings; only twenty survive in the entire world, and nineteen of them are in this exhibition. They show us the secret Bosch, with his imagination full of monsters. One drawing is called The Wood Has Ears, The Field Has Eyes – a saying inscribed on Goya’s Caprichos. Human ears hang from the trees, human eyes stare out of the ground and in this one, Beehive and Witches, who knows what is going on: 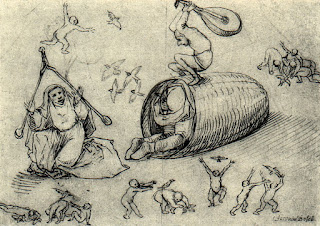 By the time of his death, Bosch was internationally celebrated as an eccentric painter of religious visions and his works were in the private collections of noble families of the Netherlands, Austria and Spain. Soon after his death. King Philip II of Spain became a serious collector of Bosch's work, and The Garden of Earthly Delights is said to have been hung in his bedroom. Bosch was imitated throughout the sixteenth century and his influence can be seen on Pieter Bruegel the Elder, who also used folklore and proverbs to create a fantasy world. Later, Bosch’s work influenced Goya and the imagery of Surrealism and Jung called him “the discoverer of the unconscious.”

Wonderful blog, and it is fascinating to reflect where his amazing and disturbing oevre comes from. The witch one; I have tried to bend my mind to it in the light of my knowledge. One of the classic ways of offending a witch was to take her swarm of bees. Is the woman beneath the curious wish-bone thing a witch, or are the witches the ones at the back? One thing is clear, the guy inside the beehive is being walloped with the lute. If there were bees inside the hive, the unfortunate inmate would be suffering front and rear. I guess, though, that the hive represents something whose significance we have long since lost, just as dogs, in old paintings, represent unrestrained lusts - though they often are so lovingly depicted that I wonder if other things are going on. Definitely fascinating.
He has to be an early surrealist; on the other hand, I guess the medieval world picture was pretty surreal anyway, so if he just illustrated it, he'd be surreal. But on the other hand, nobody went as far as he did. Even the angel has an insect-like quality, when other painters depicted them with birds' wings.

I'm ashamed to say I hadn't heard of Bosch until some years ago I read Michael Connelly's fiction novels featuring his complex cop Hieronymous 'Harry' Bosch, named after the painter by his equally complex mother. Needless to say, I then had to look up the works of the original Bosch & now always associate the real with the fictional Bosch. luckily I have seen a real Bosch at the National Trust's Petworth House Gallery in W Sussex.
Incidentally, the fictional Bosch's favourite picture is the Nighthawks by Hopper (people sitting in a 1940s American diner at night), which I was also obliged to look up & now really like.

Thank you for the blog, Miranda. Earlier in the year there had been an exhibition in Rotterdam entitled From Bosch to Bruegel that featured many of the paintings shown in Den Bosch plus those by contemporaries. A film was also made of the Bosch exhibition, entitled Jheronimus Bosch, Touched by the Devil that provides a fascinating insight into the politics behind the exhibition. A trailer can be seen here: https://vimeo.com/146311294.

Thanks, Leslie. I couldn't read the beehive witches at all but it's interesting to know there was a connection.