In our current competition, you can win a prize of Alison Weir's new book on Katherine of Aragon by choosing which of the six wives of Henry Vlll you'd like to meet and why.(Closing date 7th May). One of our Followers has already chosen the queen at the heart of historian Lucy Worsley's first novel for children, Eliza Rose: Katherine Howard.

We do witness the brief marriage with Anne of Cleves, as both Katherine and Eliza Rose herself, the invented first person narrator, serve as the queen's ladies-in-waiting before she is set aside and becomes Henry's "sister." So it is Katherine Howard, the teenaged fifth wife of the now bloated king,  who is at the centre of the novel and of a circle of young women brought up to a life at court.

Eliza Rose is Katherine's cousin - surprisingly her other more famous cousin, Anne Boleyn is not mentioned - and she comes from the impoverished noble family of Camperdownes. Eliza is the only child of the widowed Baron Stone and she lives in the crumbling Manor of Stoneton, knowing that she is the only one who can restore the family's fortunes by making a good marriage.

After a false start with a young nobleman, she is sent to her grandmother, the Duchess of Northumberland, at Trumpton Hall, where she meets a whole gaggle of young girls, including the "boldest and buxomest" Katherine.

At first there is no love lost between the cousins, but a grudging friendship forms when they go to serve Queen Anne. Still, there is always a hint of rivalry between them, beginning when they are both attracted to the Duchess's music master and Katherine is the one whose interest is reciprocated.

Later, when King Henry is on the marriage market again, Katherine and Eliza are seen to be vying for his attentions, though our heroine is doing it out of duty to her father's wishes, who wouldn't have minded if she became only the king's mistress. And again it's Katherine who triumphs, though that triumph is so pathetically short-lived.

In her time at court, Eliza has found one young man she would really like to be with, Ned Barsby, but he is the bastard son of an Earl and a humble page to the king, so she constantly reminds herself that she must marry money.

And her cousin Katherine is not to be envied, having to share her bed with the gross king and his smelly leg ulcer. But her attempts to distract herself with romance and perhaps, according to this novel, become pregnant with a child that could be passed off as the king's were more dangerous than she realised.

The author wanted to counter-balance the "general consensus ... that [Katherine] was a ditzy airhead." And she written a very engaging and readable novel about friendship, rivalry and treachery - a kind of Tudor Mean Girls but with much higher stakes. But the sympathy that we feel for the invented narrator somewhat detracts from the amount we have left for the young queen.

And after all Eliza's exhortations to do her duty, she follows her heart in the end and we see no consequences.

Lucy Worsley is the Chief Curator at Historical Royal Palaces, a charity which includes the Tower of London and Hampton Court and is a specialist in Tudor history. But in the novel she deviates from the facts by combining three historical characters into one, as she told Francesca Wade in an interview in the Daily Telegraph.

The music master in the novel is Francis Manham, whereas the actual one, who gave evidence of sexual dalliance at Katherine's trial, was Henry Mannox. He escaped with his life and may or may not have married Katherine's stepmother (she certainly married a man of that name). Katherine's other lovers were Francis Dereham (before her marriage) and Thomas Culpeper (a distant cousin), who were both executed for adultery as was the young queen. I wish Lucy Worsley had added that information to her Epilogue: Why I Wrote this Book. I think writers of historical fiction owe that sort of thing to their readers, even if the intended audience is "eleven-year-old girls." In fact, especially so. 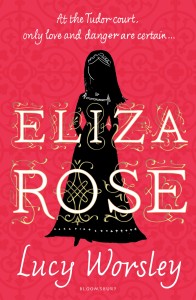