It seems strange to welcome Louisa Young as our June guest. Until very recently and from the beginning she has been a full time History Girls and has only recently stepped back a bit to the role of Reserve, so we shall hear from her again.

Louisa Young is the author of My Dear I Wanted to Tell You (HarperCollins), set between 1908 and 1919, a story of love, death and the origins of maxillo-facial reconstructive surgery in World War One. The sequel, The Heroes' Return, was published by Borough Press in 2014. She has also written The Book of the Heart (Flamingo), a cultural history of that most emblematic organ, and A Great Task of Happiness (republished 2012), a biography of her grandmother the sculptor Kathleen Scott, widow of Captain Scott of the Antarctic. Her first novel, Babylove, was listed for the Orange Prize.
As half of Zizou Corder she has co-written five children's novels with her daughter, including the Lionboy trilogy, which is published in 36 languages.

She read history at Trinity College, Cambridge, and lives in London, where she has written the second sequel to My Dear I Wanted to Tell You. Called Devotion, it deals with a long neglected aspect of WW2 in Italy and is another highly recommended read.

A long long time ago I sat with an American friend of my dad’s, a photographer and art historian, who has lived in Rome since the late 1940s. When I was a child he lived in a house on the Tiber Island, which to me, then and now, was and is the most romantic place in the world. Now, it is all rather well-organised:

When I first went, it wasn’t quite like this: 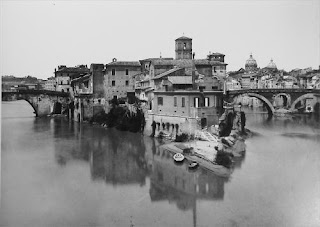 with boats and mud, so that you could believe the legend of it being built on the bones of Tarquin the Superb, the tyrant whose body was thrown into the river in 510BC. The shape, boat-like, was first re-inforced in the First Century: slabs of marble gave it a prow and a stern, commemorating the boat which brought a statue of the healing god Aesculapius and one of his holy snakes from Greece, after an outbreak of plague in 293 BC. The snake apparently leapt off the boat and swam to the island, which was seen as a sign that this was the best place to build Aesculapius's temple, and after that came the hospitals which are still there. Of course an island is always a good place for a hospital, specially when diseases are infectious. A carving of the Aesculapian rod and snake are still visible on the rock at the prow. 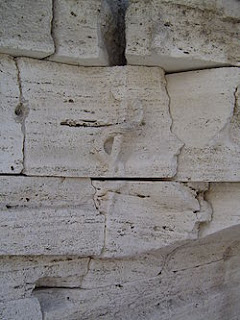 The stairs in our friend’s house were made of white marble, and if you looked out the window at the back the river tumbled and rushed below. We ate fried artichokes, and the grownups drank gin and It (Italian vermouth i.e. martini) and we could nip and talk to the strange post with four heads on it, or try to climb into the hospital grounds so we could do a proper circumnavigation of the island. Alas he moved, later, to a flat in a palazzo in Sant’Angelo, known as Piazza Tartaruga, Piazza Turtle, because of the little turtles balanced on the bowl of its central fountain. But that was a lovely flat too. 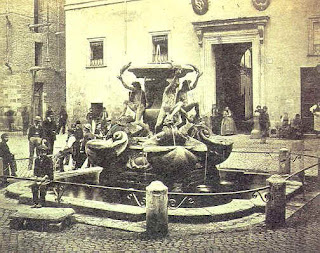 Someone - my father? - pointed out to me in a neighbouring street - via della Reginella - how the building behind the palazzo, thought the same height, contained five floors, where the palazzo had three. The apartments in that building had lower ceilings, smaller windows, more occupants. This, I learned, was where the edge of the Jewish Ghetto had been. Big-roomed palazzo outside the gate; many-floored lodgings inside. It is too narrow a street to photograph this, but here is the street in 1944: 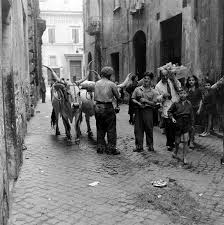 And here is the street now, four cobbles replaced and named in honour of Grazia di Segni, born 1889
Giuditta Spizzichino, born 1922, Ada Spizzichino born 1915, and Rossana Calò, who was two years old. They were all arrested on October 16 1943,  deported and murdered in Auschwitz. 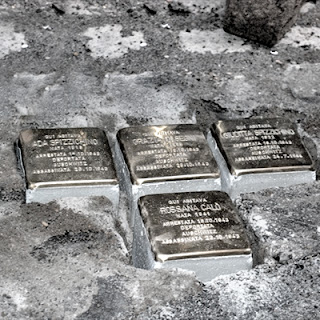 Our friend the photographer told me a story about a room in a flat just outside where the ghetto walls had been, a room with no windows, discovered by a new tenant in the 1960s. The tenant asked the landlord about it, what it was, and after some trouble and pursuit of the matter received the answer that ‘This was where the Jews hid during the Nazi occupation’. He was surprised, as he knew the family concerned had been devoted Fascists. Why would they have been hiding Jewish people?

‘Oh, they were hiding the Fascist Jews.’

Like many people, I have had a tendency to look at history from where I am, rather than from where people were at the time. 'Fascist Jews’, in the 21st century, seems a nonsense, impossible. But from 1920 there were Fascist Jews: immigrants from eastern Europe determined to prove their nationalistic loyalty to their new home country, communities in the west and the south who had been in Italy for hundreds of years but still felt it best in the interests of self-preservation to go along with the flow of public opinion, and in Rome a community which was there before Julius Caesar, before Christianity, before the split of Jewry into Sephardi and Ashkenazi even. It is the oldest Jewish community in the diaspora.

Remember what a  mess Italy was after WW1? Remember the Russian Revolution, and how utterly terrifying that was? Remember D’Annunzio and his lances, and how useless the government was? Remember how Italy as a country was not yet fifty years old, and how the walls of the Roman Ghetto only came down in 1888 - not even thirty years earlier?  Now, we know exactly why Mussolini was a terrible, terrible idea. Then, they didn’t know. And Jewish families had no special gift of seeing the future, and all the more historical reasons to be nervous.

Which all added up, for me, to the setting for a novel.

It’s called Devotion, and it’s out on June 2, published  by Borough Press. It continues the story that started in WW1 in My Dear I Wanted to Tell You, moving things on to the next generation. Tom, the English boy, loves his Roman Jewish cousin Nenna. Nenna loves her father, Aldo. And Aldo loves Mussolini. The moral? Be careful what you devote yourself to. 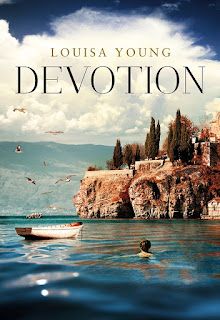 This looks marvellous! Can't wait to read it, Louisa...

Is this the English Light version of "All the Light we cannot see"?
Anthony Doerr has done first and has done it best.